In Turkey, pope will tour crossroads of Christian Europe and Muslim Middle East 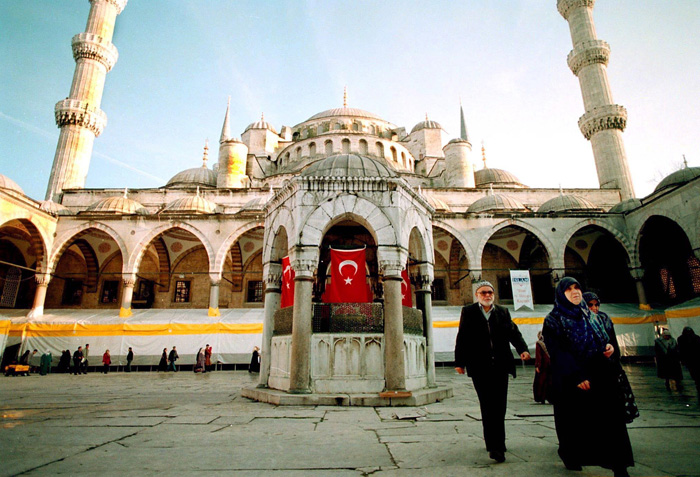 Istanbul's Sultan Ahmet Mosque, known as the Blue Mosque, is seen in this 1998 file photo. Pope Francis will visit the mosque during a trip to Turkey Nov. 28-30. (CNS photo/Mehmet Gulbiz, EPA)

His visit to this secular but Muslim country of nearly 77 million people also offers the opportunity for Pope Francis to join Orthodox Ecumenical Patriarch Bartholomew of Constantinople for celebrations in Istanbul of the feast of St. Andrew.

The pope and the patriarch send delegations to each other’s churches each year for the celebrations of their patron saints’ feast days: the Vatican’s June 29 feast of SS. Peter and Paul and the Orthodox churches’ Nov. 30 feast of St. Andrew.

While the pope will pray with and meet privately with Patriarch Bartholomew Nov. 29 and attend his celebration of the Nov. 30 feast day liturgy in Istanbul, Pope Francis also will visit the city’s Hagia Sophia Museum, an architectural masterpiece once regarded as the finest church of the Christian Byzantine Empire. It was later converted into a mosque in the 15th century and then turned into a museum in 1935 after Turkey became a secular state.

Pope Francis will visit the grandiose Sultan Ahmet Mosque, or the Blue Mosque, as it is often called because of the turquoise ceramic tiles that adorn the 400-year-old structure’s interior.

The scheduled stops underline Turkey’s varied cultural heritage and history as being at the crossroads of Christian Europe and the Muslim Middle East.

The first day of his trip, which will be spent in Ankara, the capital, will be dedicated to relations with the Turkish government, its office overseeing religious affairs and ambassadors serving in the country. The head of the department of religious affairs is Turkey’s highest Muslim authority.

The Vatican published the pope’s schedule Oct. 21, but without providing the exact time and features of many of the events because details remain to be finalized.

Here is the schedule published by the Vatican. Times listed are local, with Eastern Standard Time in parentheses.

— Visit to the mausoleum of Mustafa Kemal Ataturk, founder of the Republic of Turkey.

— Meeting with the president of the government office for religious affairs.

— Visit to the Hagia Sophia Museum.

— Visit to the Sultan Ahmet Mosque, informally known as the Blue Mosque.

— Mass in the Cathedral of the Holy Spirit. Homily by pope.

— Prayer visit to the patriarchal Church of St. George in Istanbul and private meeting with Patriarch Bartholomew.

— Mass with the papal delegation celebrated in private.