If laws don’t lead people to Jesus, they are obsolete, pope says 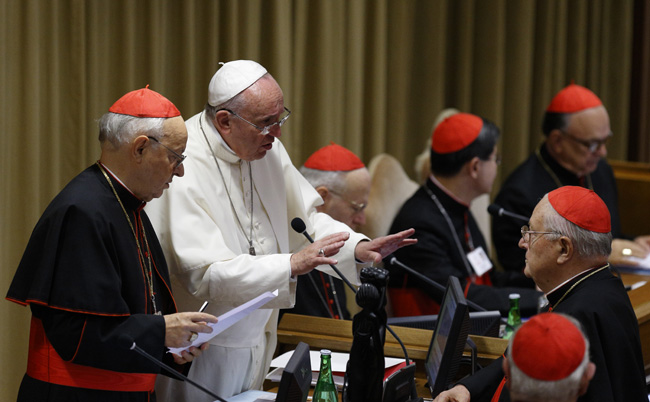 Pope Francis gestures as he talks with Cardinal Angelo Sodano, retired Vatican secretary of state, before the morning session of the extraordinary Synod of Bishops on the family at the Vatican Oct. 9. At left is Italian Cardinal Lorenzo Baldisseri, general secretary of the Synod of Bishops. (CNS photo/Paul Haring)

VATICAN CITY (CNS) — God’s laws are meant to lead all people to Christ and his glory, and if they do not, then they are obsolete, Pope Francis said in a morning homily.

In fact, the scholars of the law in Jesus’ day were so wrapped up in doctrine as an end in itself, they were unable to see that Jesus was leading people down a new and surprising path toward his glory, the pope said Oct. 13 during his morning Mass in the Domus Sanctae Marthae, where he lives.

Jesus did “strange things,” like “walk with sinners, eat with tax collectors” — things the scholars of the law “did not like; doctrine was in danger, that doctrine of the law” that they and the “theologians had created over the centuries,” he said, according to Vatican Radio.

The scholars were safeguarding the law “out of love, to be faithful to God,” the pope said, but “they were closed up right there,” and forgot all the ways God has acted in history.

“They forgot that God is the God of the law, but is also the God of surprises,” he said.

“God is always new; he never denies himself, he never says that what he had said is wrong, but he always surprises us,” the pope said.

The scholars of the law had forgotten how many times God surprised his people, like when he freed them from slavery in Egypt, he said. They were too wrapped up in their perfect system of laws — “a masterpiece” where everyone knew exactly what he or she was supposed to do; “it was all settled. And they felt very secure there,” he said.

They couldn’t see beyond “this system made with lots of good will,” and they could not read the “signs of the times,” the pope said.

They couldn’t see that what Jesus was doing was a sign indicating “that the time was ripe,” he said. This is why in the day’s Gospel reading (Lk 11:29-32) Jesus said, “This generation is an evil generation,” because it sought the wrong kind of sign, the pope said.

The scholars of the law also forgot that the people of God are a people on a journey, “and when you journey, you always find new things, things you never knew before,” he said. But the journey, like the law, is not an end in itself; they are a path, “a pedagogy,” toward “the ultimate manifestation of the Lord. Life is a journey toward the fullness of Jesus Christ, when he will come again.”

Pope Francis asked people to reflect, “Am I attached to my things, my ideas. Am I closed?”

“Am I at a standstill or am I a person on a journey? Do I believe in Jesus Christ, in what Jesus did,” dying for humanity’s sins and rising again? he asked.

“Am I able to understand the signs of the times and be faithful to the voice of the Lord that is manifested in them?” he asked.

Pope Francis urged people to pray to be able to walk “toward maturity, toward the manifestation of the glory of the Lord” and to have a heart “that loves the law, because the law is God’s.”

But may people also be able to “love God’s surprises and to know that this holy law is not an end in itself,” he said.

PREVIOUS: Synod calls church to accept gay people and couples of all kinds