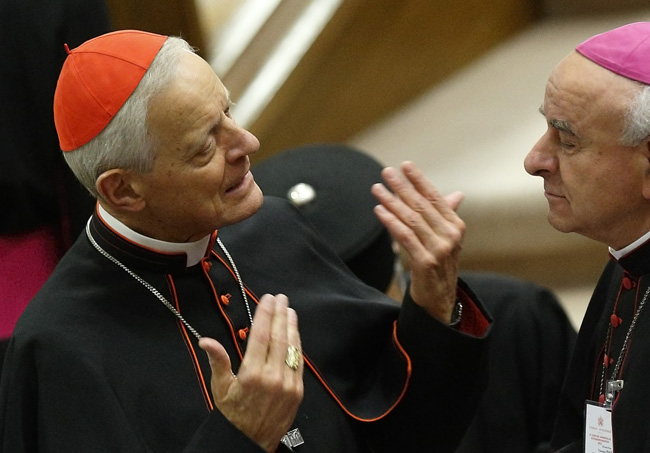 Cardinal Donald W. Wuerl of Washington talks with Archbishop Vincenzo Paglia, president of the Pontifical Council for the Family, before the morning session of the extraordinary Synod of Bishops on the family at the Vatican Oct. 9. (CNS photo/Paul Haring)

VATICAN CITY (CNS) — In strikingly conciliatory language on situations contrary to Catholic teaching, an official midterm report from the Synod of Bishops on the family emphasized calls for greater acceptance and appreciation of divorced and remarried Catholics, cohabitating couples and homosexuals.

“It is necessary to accept people in their concrete being, to know how to support their search, to encourage the wish for God and the will to feel fully part of the church, also on the part of those who have experienced failure or find themselves in the most diverse situations,” Hungarian Cardinal Peter Erdo of Esztergom-Budapest told Pope Francis and the synod Oct. 13.

Cardinal Erdo, who as the synod’s relator has the task of guiding the discussion and synthesizing its results, gave a nearly hourlong speech that drew on the synod’s first week of discussions.

“Homosexuals have gifts and qualities to offer to the Christian community,” the cardinal said. “Often they wish to encounter a church that offers them a welcoming home. Are our communities capable of providing that, accepting and evaluating their sexual orientation, without compromising Catholic doctrine on the family and matrimony?”

The statement represents a marked shift in tone on the subject for an official Vatican document. While the Catechism of the Catholic Church calls for “respect, compassion and sensitivity” toward homosexuals, it calls their inclination “objectively disordered.” A 1986 document from the Congregation for the Doctrine of the Faith called homosexuality a “more or less strong tendency ordered toward an intrinsic moral evil.” In 2003, the doctrinal congregation stated that permitting adoption by same-sex couples is “gravely immoral” and “would actually mean doing violence to these children.”

While Cardinal Erdo said that same-sex unions present unspecified “moral problems” and thus “cannot be considered on the same footing” as traditional marriage, he said they also can exemplify “mutual aid to the point of sacrifice (that) constitutes a precious support in the life of the partners.”

He noted that the “church pays special attention to the children who live with couples of the same sex, emphasizing that the needs and rights of the little ones must always be given priority.”

The cardinal said a “new sensitivity in the pastoral care of today consists in grasping the positive reality of civil marriages and … cohabitation,” even though both models fall short of the ideal of sacramental marriage.

“In such unions it is possible to grasp authentic family values or at least the wish for them,” he said. “All these situations have to be dealt with in a constructive manner, seeking to transform them into opportunities to walk toward the fullness of marriage and the family in the light of the Gospel. They need to be welcomed and accompanied with patience and delicacy.”

Similarly, the cardinal said, divorced and civilly remarried Catholics deserve an “accompaniment full of respect, avoiding any language or behavior that might make them feel discriminated against.”

Cardinal Erdo noted that various bishops supported making the annulment process “more accessible and flexible,” among other ways, by allowing bishops to declare marriages null without requiring a trial before a church tribunal.

One of the most discussed topics at the synod has been a controversial proposal by German Cardinal Walter Kasper that would make it easier for divorced and civilly remarried Catholics to receive communion, even without an annulment of their first, sacramental marriages.

Cardinal Erdo said some synod members had spoken in support of the “present regulations,” which admit such Catholics to Communion only if they abstain from sexual relations, living with their new partners as “brother and sister.”

But the cardinal said other bishops at the assembly favored a “greater opening” to such second unions, “on a case-by-case basis, according to a law of graduality, that takes into consideration the distinction between state of sin, state of grace and the attenuating circumstances.”

As a historical example of the “law of graduality,” which he said accounts for the “various levels through which God communicates the grace of the covenant to humanity,” the cardinal quoted Jesus’ words in the Gospel of St. Matthew (19:8) acknowledging that, “because of the hardness of your hearts, Moses allowed you to divorce your wives, but from the beginning it was not so.”

Critics of Cardinal Kasper’s proposal commonly cite the Gospel’s following verse, in which Jesus states that “whoever divorces his wife (unless the marriage is unlawful) and marries another commits adultery.”

At a news conference following the synod’s morning session, Cardinal Erdo said no one at the synod had questioned church teaching that Jesus’ prohibition of divorce applies to all Christian sacramental marriages.

Also at the news conference, Cardinal Luis Antonio Tagle of Manila, one of the assembly’s three presidents chosen by Pope Francis, said Cardinal Erdo’s speech “is not to be considered a final document from the synod,” but a pretext for the further discussion, which concludes Oct. 18.

The synod is not supposed to reach any definitive conclusions, but set the agenda for a larger world synod to be held Oct. 4-25, 2015, which will make recommendations to the pope. Cardinal Lorenzo Baldisseri, general secretary of the synod, announced Oct. 13 that the theme of next’s year assembly will be: “The vocation and mission of the family in the church and in the modern world.”

PREVIOUS: Mind your language, bishops tell each other in Vatican synod

NEXT: If laws don’t lead people to Jesus, they are obsolete, pope says