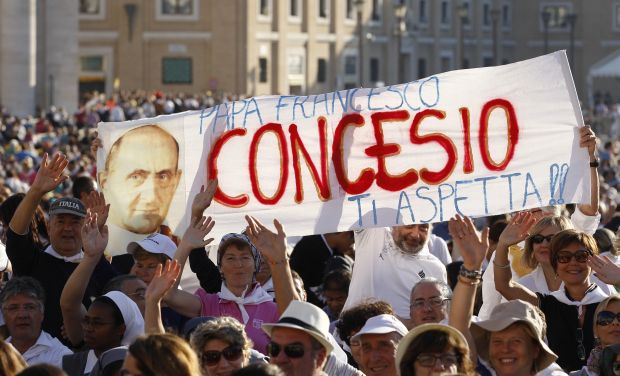 An image of Blessed Paul VI is seen on a banner prior to his beatification Mass celebrated by Pope Francis in St. Peter's Square at the Vatican Oct. 19. (CNS photo/Paul Haring)

VATICAN CITY (CNS) — Beatifying Blessed Paul VI at the concluding Mass of the Synod of Bishops on the family, Pope Francis praised the late pope as the “great helmsman” of the Second Vatican Council and founder of the synod, as well as a “humble and prophetic witness of love for Christ and his church.”

The pope spoke during a homily in St. Peter’s Square at a Mass for more than 30,000 people, under a sunny sky on an unseasonably warm Oct. 19.

“When we look to this great pope, this courageous Christian, this tireless apostle, we cannot but say in the sight of God a word as simple as it is heartfelt and important: thanks,” the pope said, drawing applause from the congregation, which included retired Pope Benedict, whom Blessed Paul made a cardinal in 1977.

“Facing the advent of a secularized and hostile society, (Blessed Paul) could hold fast, with farsightedness and wisdom — and at times alone — to the helm of the barque of Peter,” Pope Francis said, in a possible allusion to “Humanae Vitae,” the late pope’s 1968 encyclical, which affirmed Catholic teaching against contraception amid widespread dissent. 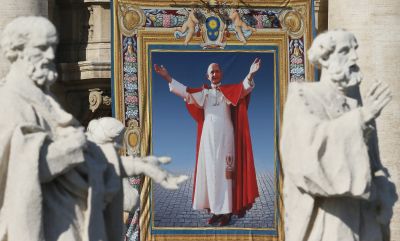 A tapestry of Blessed Paul VI hangs from the facade of St. Peter’s Basilica during his beatification Mass celebrated by Pope Francis in St. Peter’s Square at the Vatican Oct. 19. (CNS photo/Paul Haring)

The pope pronounced the rite of beatification at the start of the Mass. Then Sister Giacomina Pedrini, a member of the Sisters of Holy Child Mary, carried up a relic: a bloodstained vest Blessed Paul was wearing during a 1970 assassination attempt in the Philippines. Sister Pedrini is the last surviving nun who attended to Blessed Paul.

In his homily, Pope Francis did not explicitly mention “Humanae Vitae,” the single achievement for which Blessed Paul is best known today. Instead, the pope highlighted his predecessor’s work presiding over most of Vatican II and establishing the synod. 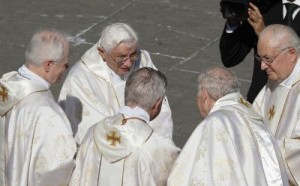 The pope quoted Blessed Paul’s statement that he intended the synod to survey the “signs of the times” in order to adapt to the “growing needs of our time and the changing conditions of society.”

Looking back on the two-week family synod, Pope Francis called it a “great experience,” whose members had “felt the power of the Holy Spirit who constantly guides and renews the church.”

The pope said the family synod demonstrated that “Christians look to the future, God’s future … and respond courageously to whatever new challenges come our way.” 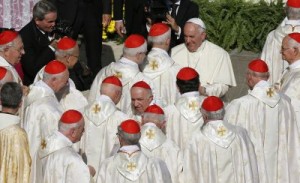 Pope Francis greets cardinals at the conclusion of the beatification Mass of Blessed Paul VI in St. Peter’s Square at the Vatican Oct. 19. (CNS photo/Paul Haring)

The synod, dedicated to “pastoral challenges of the family,” touched on sensitive questions of sexual and medical ethics and how to reach out to people with ways of life contrary to Catholic teaching, including divorced and civilly remarried Catholics, cohabitating couples and those in same-sex unions.

“God is not afraid of new things,” Pope Francis said. “That is why he is continually surprising us, opening our hearts and guiding us in unexpected ways. He renews us; he constantly makes us new.” 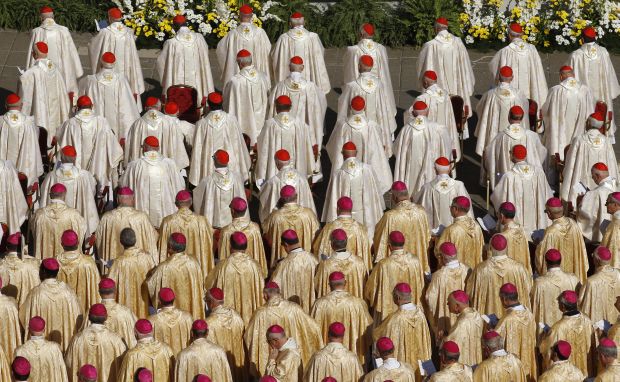 NEXT: In Turkey, pope will tour crossroads of Christian Europe and Muslim Middle East