Pope: Evolution, Big Bang do not push aside God, who set it in motion 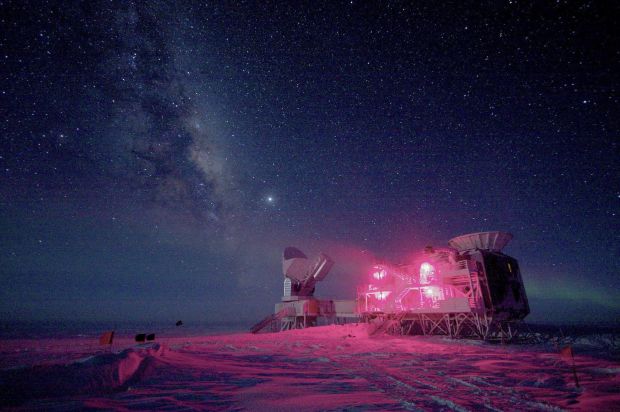 The South Pole Telescope and the Background Imaging of Cosmic Extragalactic Polarization experiment, or Biceps2, at Amundsen-Scott South Pole Station are seen against the night sky in this National Science Foundation picture from 2008. Researchers used the equipment to detect ripples in the space-time fabric that echo the massive expansion of the universe that took place just after the Big Bang. Pope Francis Oct. 28 told the Pontifical Academy of Sciences that the Big Bang theory and evolution do not eliminate the existence of God, who remains the one who set all of creation into motion. (CNS photo/Keith Vanderlinde/National Science Foundation via Reuters)

VATICAN CITY (CNS) — The Big Bang theory and evolution do not eliminate the existence of God, who remains the one who set all of creation into motion, Pope Francis told his own science academy.

And God’s existence does not contradict the discoveries of science, he told members of the Pontifical Academy of Sciences Oct. 27.

“When we read the account of creation in Genesis, we risk thinking that God was a magician, complete with a magic wand, able to do everything. But it is not like that,” he said. “He created living beings and he let them develop according to the internal laws that he gave each one, so that they would develop and reach their full potential.”

The beginning of the world is not a result of “chaos,” he said, but comes directly from “a supreme principle that creates out of love.”

“The Big Bang, which today is held as the beginning of the world, does not contradict the intervention of the divine creator, but requires it,” he said. “Evolution in nature is not at odds with the notion of creation because evolution presupposes the creation of beings that evolve.”

Members of the academy, many of them renowned scientists and philosophers, were meeting at the Vatican Oct. 24-28 to discuss “Evolving Concepts of Nature.”

Science, philosophy and religion have all contributed to how people see the world, how it began and what it all means, said the introduction to the academy’s program.

Despite many scientific advances, many mysteries remain, said Rafael Vicuna, professor of molecular genetics and molecular biology at the Pontifical Catholic University of Chile. While Charles Darwin shed light on the origin of species, one of the most perplexing questions is the actual origin of life, Vicuna said.

How is it that inert, inanimate matter turned into something living, and how is it that the first living single-celled organisms were still so amazingly complex, he asked in his talk Oct. 27.

Chemistry, biology and genetics have been able to identify the tiniest components and basic building blocks of living organisms, but there is something more than just what they are made out of that makes them “living,” he said in an interview with the Catholic newspaper, Avvenire.

“I can know perfectly what a cell is made up of, but how it works deep down, what really is the dynamism that makes it move — that is, life — I don’t know,” Vicuna said. “A refrigerator and a car are complex structures that move, but only with an immense amount of energy from the outside. Life, in its deepest essence, remains something that escapes us.”

In his talk to academy members, Vicuna said the laws of chemistry and physics “do not suffice to grasp the whole of life … that life is more than molecules.”

Another mystery is how everything in the universe, from the smallest atomic particles to every galaxy, is spinning and orbiting, another academy member said.

Rudolf Muradyan, a quantum and mathematical physicist who also works in cosmology, said in his talk that spin “is the most important problems in our universe. It is the only thing that prevents the universe from totally collapsing.”

Without bodies rotating on an axis or orbiting each other, everything would fall: all the stars would become one giant black hole, the earth would crash into the sun and the moon would collide into the earth, he said.

He said the problem with the Big Bang theory is it explains linear motion, with everything moving outward and expanding from one common point as a result of the “bang,” but it does not account for the rotation of celestial objects, and theories that the universe was “born spinning.”

Philosophy and religion have to be careful to not make the mistake of trying to solve the mysteries in nature by making God “responsible for a natural process that escapes scientific explanation,” Vicuna said.

An example of this, he said, can be found in the intelligent design movement, which accepts that life has evolved over eons but asserts that it is so complex that its development must have been guided by a supreme being or intelligent agent.

Not only are intelligent-design proponents “denying nature’s autonomy, but they are also revealing some degree of ingenuousness, because science has already provided explanations for the development” of structures they had considered to be too complex to occur naturally, he said.

However, there is an argument for the “apparent design, order and purpose observed in nature,” he said, which is not to be confused with intelligent design and it is the “God of the gaps.”

Pierre Lena, a French Catholic astrophysicist, told the assembly that there are laws at work in the entire universe that are “eternal, creative, uniform in space and time and stable” enough to be fairly predictable.

“But these laws have a mystery. Why are they there? We can’t touch them, but they act. They are not God,” he said, but they are a sign of the “supranatural existence of something.”

He told Catholic News Service that scientists can observe laws working exactly the same way over time and space. This “strange property” means scientists can figure out what most likely happened one billion years ago, as well as “in a remote galaxy and here in this room with the same accuracy.”

“If the laws were changing, science would not be possible,” Lena said.

Early philosophers like Plato, St. Thomas Aquinas and St. Augustine all felt nature’s wonder and beauty reflected the beauty and perfection of their maker, Vicuna said.

However, “the existence of a divine creator of life and the universe” comes from personal belief and conviction, not scientific proof; science cannot empirically prove or disprove a God that transcends the natural sciences, he said.

NEXT: Pope urges activists to struggle against ‘structural causes’ of poverty