Pope urges activists to struggle against ‘structural causes’ of poverty 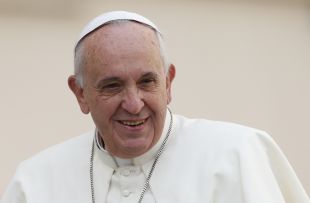 VATICAN CITY (CNS) — Pope Francis urged an international gathering of grassroots social activists to struggle against the “structural causes” of poverty and inequality, with a “revolutionary” program drawn from the Gospels.

“The poor no longer wait, they seek to be protagonists, they organize, study, work, demand and, above all, practice that special solidarity that exists among those who suffer, among the poor,” the pope said Oct. 28, to a Vatican-sponsored World Meeting of Popular Movements.

The pope said solidarity entails struggling “against the structural causes of poverty, inequality, the lack of work, land and shelter, the denial of social and labor rights,” and confronting what he called the “empire of money.”

Most of what the pope said recalled his earlier statements on social justice, especially his November 2013 apostolic exhortation, “Evangelii Gaudium” (“The Joy of the Gospel”), but he delivered the remarks with a strong note of personal encouragement to the activists, telling them: “Today I want to join my voice to yours and accompany you in your struggle.”

Pope Francis said Catholic social teaching defines “land, shelter and work” as “sacred rights,” yet “if I speak of this some people conclude that the pope is a communist.”

Deploring the displacement of his “brother peasants” from their “native soil,” the pope warned that traditional rural life is at “risk of extinction.” He also said “financial speculation” on food prices was to blame for the starvation of millions around the world.

“I’ve said and I repeat: a home for every family,” Pope Francis said. “Family and shelter go hand in hand.”

Scorning terms such as “homeless people” as euphemisms, the pope said that, in general, “behind a euphemism lies a crime.”

The pope called for urban planning based on the “authentic and respectful integration” of different communities, and criticized real estate developers who demolish the “poor settlements” typical of cities in underdeveloped countries.

Every neighborhood should have “adequate infrastructure,” include sewers, streets and recreational facilities, he said.

Pope Francis reiterated his earlier criticisms of rising youth unemployment, in Europe and elsewhere, as reflective of a “throwaway culture” that treats people as leftovers. Other examples, he said, include society’s neglect of the aged, low fertility rates, malnourished children and abortion.

Noting that he was addressing representatives of non-unionized workers such as trash pickers, street peddlers and artisans, the pope said “every worker, whether or not part of a formal system of salaried work, has the right to a decent wage, social security and a pension plan.”

The pope said social justice also requires peace and environmental protection, both of which the global economic system inevitably threatens.

Pope Francis said that he was writing an encyclical on ecology, and promised the activists that the document would reflect their concerns.

The pope acknowledged that the activists sought to replace the current economic and political system with one based on “human dignity,” but warned them to avoid destructive extremism in the process.

“It must be done with courage, but also with intelligence; with tenacity, but without fanaticism; with passion, but without violence,” he said, and recommended that social movements take their “guide of action,” from the Gospels, specifically the beatitudes and the 25th chapter of Matthew, in which Jesus says: “whatever you did for one of these least brothers of mine, you did for me.”

At the end of his speech, which lasted more than half an hour, the pope gave the more than 150 activists rosaries he said had been made by “artisans, trash pickers and workers from the popular economic of Latin America.”

In the audience was Bolivian President Evo Morales, an outspoken and controversial critic of globalization, who the Vatican noted was attending not as a head of state but as the leader of a grassroots social movement. Morales was scheduled to meet informally with Pope Francis later the same day.

PREVIOUS: Pope: Evolution, Big Bang do not push aside God, who set it in motion