‘Beyond the Lights’ offers shadowy view of sexuality 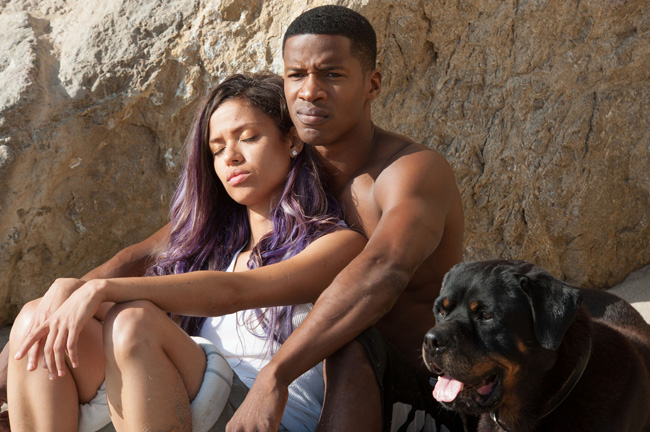 Gugu Mbatha-Raw (left) and Nate Parker star in a scene from the movie "Beyond the Lights." The Catholic News Service classification is A-III -- adults. The Motion Picture Association of America rating is PG-13 -- parents strongly cautioned. Some material may be inappropriate for children under 13. (CNS photo/Relativity)

NEW YORK (CNS) — Though obviously well-intended, the romantic drama “Beyond the Lights” (Relativity) includes elements that make it problematic even for grown viewers.

In large part, that’s a result of the milieu in which the film is set: the vulgarity-soaked world of rap music.

As a rising star within the genre, British born singer Noni (Gugu Mbatha-Raw) seems to have everything going for her: clamoring fans, industry awards and an upcoming album that promises to be a blockbuster. Behind the scenes, however, Noni is so burnt-out and miserable that she attempts to commit suicide by jumping from the balcony of her luxurious Los Angeles hotel.

She’s prevented from doing so by the soothing intervention of Kaz (Nate Parker), the policeman assigned to protect her. He gives her back the will to live by assuring her that he can see the real person behind her public persona. In the wake of this dramatic first meeting, the cocooned diva and the solitary cop — who aspires to become a politician — take a somewhat unlikely shine to each other.

Their budding relationship is opposed by Noni’s success-at-all-costs showbiz mom, Macy (Minnie Driver), and by callous singer Kid Culprit — played by real-life rapper Richard Colson Baker, aka Machine Gun Kelly — who is both Noni’s collaborator and her lover.

A sadly realistic atmosphere of degraded sensuality pervades the musical performances in writer-director Gina Prince-Bythewood’s movie, though the story arc eventually finds Noni rebelling against this aspect of her career.

Additionally, the script takes going to bed before strolling down the aisle for granted. Thus Noni and Kaz have a somewhat bizarre encounter on a private plane within days of meeting each other. They later skip town and drop out of sight for an interlude of living together that the narrative unabashedly romanticizes.

Yet their story does have its appealing aspects, including the positive mutual support that generally marks their interaction. Kaz encourages Noni’s ambition to write her own songs and perform more serious material in the mold of jazz icon Nina Simone. Noni, in turn, helps Kaz to recognize that he can’t live his life according to the dictates of his good-hearted but controlling dad, David (Danny Glover).