‘Interstellar’ aims high on liftoff, but it has a problem 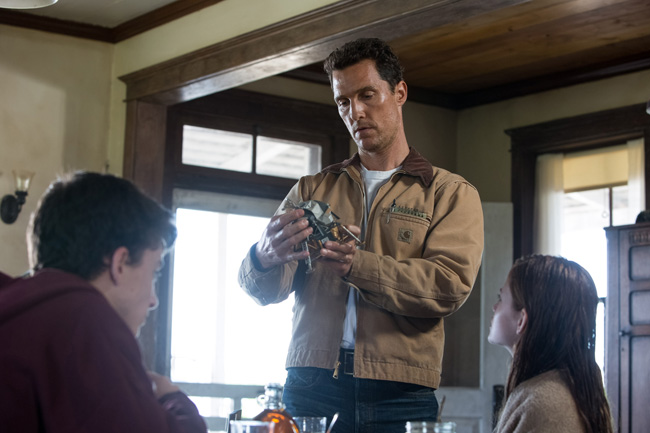 From left, Timothee Chalamet, Matthew McConaughey and Mackenzie Foy star in a scene from the movie "Interstellar." The Catholic News Service classification is A-III -- adults. The Motion Picture Association of America rating is PG-13 -- parents strongly cautioned. Some material may be inappropriate for children under 13. (A-III, PG-13). (CNS photo/Melinda Sue Gordon, courtesy Paramount)

While its ambitions are admirable and its visuals dazzling, the film’s roughly three-hour running time tries patience. Other aesthetic miscalculations, combined with morally problematic elements, ultimately make for something of a flawed liftoff.

Director and co-writer (with his brother Jonathan) Christopher Nolan charts the exploits of a crew of astronauts who use a wormhole to speed their travel to distant planets. Their critical goal is to find a habitable refuge for the entire human race, which is facing worldwide starvation back on a dystopian, dustbowl-plagued version of Earth.

Leading the mission is former test pilot and engineer-turned-unwilling-farmer Cooper (Matthew McConaughey). With society’s need to cultivate crops having displaced interest in advancing technology, Cooper, a widower, has been forced to pursue an agricultural lifestyle on the farmstead he shares with his cranky father-in-law Donald (John Lithgow), his placid teen son, Tom (Timothee Chalamet), and his precocious, adoring daughter, Murph (Mackenzie Foy).

So when an unusual turn of events results in the opportunity for Cooper to command a space expedition, he essentially jumps at the chance, despite the fact that the prospect of his prolonged absence is nothing short of crushing to Murph.

Cooper is joined on the journey by astrophysicist Romilly (David Gyasi) and science officer Amelia Brand (Anne Hathaway). The latter’s father (Michael Caine) — a renowned professor who was once Cooper’s mentor — conceived the rescue program and is its overall supervisor.

Just as protracted separation tests Cooper’s bond with Murph (played in adulthood by Jessica Chastain), so Amelia’s relationship with her idolized dad is eventually subjected to other strains.

“Interstellar” has most of its values in good order as it weighs familial ties against the sacrifices necessary to advance the common welfare and ponders the place of love within a worldview shaped by quantum mechanics and Darwinian evolution. But both the film’s implicit message about the dire consequences of overpopulation and a subplot involving frozen embryos call for moral discernment.

Cinematically, unnatural situations resulting from the relativity of time and other environmental factors create a distance from ordinary reality that blunts the impact of the movie’s human element. In this respect, “Interstellar” stands in contrast to Nolan’s masterful 2010 mind-bender “Inception.”

In that earlier picture, different strands of events simultaneously unfolding within varied chronologies made for suspense and excitement. Here the playful feel of “Inception” is absent, as too is the driving sense of urgency. Instead, like the character central to the climax of “Interstellar,” moviegoers are likely to feel trapped by the theoretical paradoxes of boldly going where no man — or woman or movie director, for that matter — has gone before.

The film contains ethical issues, some bloodless violence, a handful of profanities and occasional crude and crass language. The Catholic News Service classification is A-III — adults. The Motion Picture Association of America rating is PG-13 — parents strongly cautioned. Some material may be inappropriate for children under 13.

PREVIOUS: ‘Nightcrawler’ is more dark and seamy than it sounds

NEXT: Huge squishy robot steals the show in ‘Big Hero 6’