‘Top Five’ bottoms out with its look of love 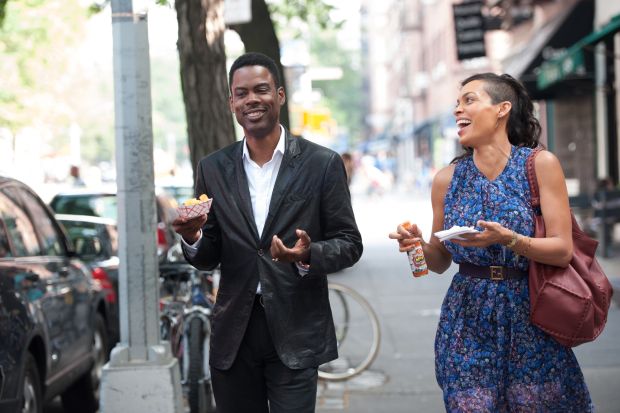 Chris Rock and Rosario Dawson star in a scene from the movie "Top Five." (CNS photo/Paramount)

NEW YORK (CNS) — At its core, the romantic comedy “Top Five” (Paramount) is a well-intentioned look at the redeeming power of love.

Unfortunately, the film comes wrapped in layers of smutty humor that suffocate its fundamentally honorable message.

Chris Rock wrote, directed and stars in this vaguely autobiographical story about Andre Allen. A successful stand-up comic and recovering alcoholic, Andre has sold out to Hollywood by playing the ridiculous role of Hammy the Bear in a series of absurd action flicks.

It’s a part with which Andre is now so largely identified in the public mind that his effort to turn his career in a more serious direction by recreating the life of a Haitian revolutionary on screen seems doomed to box-office disaster.

With his forlorn film about to open, and on the eve of his publicity-driven marriage to reality-TV celebrity Erica Long (Gabrielle Union), Andre reluctantly agrees to be interviewed by down-to-earth New York Times reporter Chelsea Brown (Rosario Dawson). Chelsea’s frank probing of Andre’s past eventually induces him to reassess his priorities.

Their initially hostile, but increasingly appreciative relationship also encourages Andre to confront his fear that he can only be funny in front of a live audience if his humor is fuelled by booze.

Discussion of the lowest point in Andre’s personal life cues a seamy flashback to his on-the-road encounter with two Houston call girls, a shot at carnal bliss jarringly interrupted by the arrival of Jazzy Dee (Cedric the Entertainer), the local promoter who arranged for it in the first place. The fact that Jazzy Dee promptly takes Andre’s place on the mattress is meant to provoke laughs.

Chelsea, meanwhile, is grappling with the fact that her boyfriend, Brad (Anders Holm), seems to be having a gay affair with one of his pals. Andre questions her as to any clues she might have had about Brad’s proclivities, leading to another series of queasy glimpses into the past.

Even the movie’s central bond is not immune to sleaziness, as we discover when Andre and Chelsea duck into a restaurant restroom together for a semi-private grappling session.

The film contains graphic scenes of group sex and other deviant activities, upper female and rear nudity, a frivolous treatment of homosexuality, at least one use of profanity and pervasive rough and crude language. The Catholic News Service classification is O — morally offensive. The Motion Picture Association of America rating is R — restricted. Under 17 requires accompanying parent or adult guardian.

PREVIOUS: ‘Exodus: Gods and Kings’ epic in scope, but a bit boring