‘Still Alice’ could have been better, still 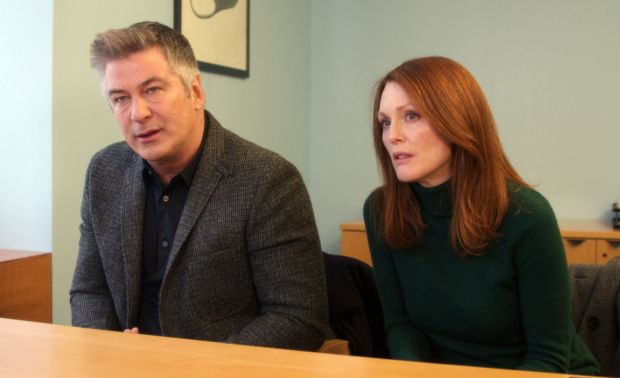 Alec Baldwin and Julianne Moore star in a scene from the movie "Still Alice." (CNS photo/Sony)

NEW YORK (CNS) — The real depredations of Alzheimer’s disease and its toll on the families of the afflicted are not on display in the flawed drama “Still Alice” (Sony Classics).

“Iris,” the 2001 film that starred Judi Dench as British novelist Iris Murdoch, was particularly frank about the effects of the illness, both mental and physical. It also highlighted the special tragedy when someone who has built a career as a communicator falls prey to the affliction.

“Still Alice” — which stars Julianne Moore as Columbia University linguistics professor Alice Howland — should, by contrast, carry the label “Sanitized for your protection.” Everyone involved is highly attractive, articulate, compassionate and virtually devoid of any flaws that would mark them as human.

What’s left is a sensitive and appealing performance by Moore as Alice’s mind fades from early onset Alzheimer’s; her character has just turned 50. As for the rest of the story, adapted by directors and co-writers Richard Glatzer and Wash Westmoreland from Lisa Genova’s 2007 novel, it has plot holes large enough to accommodate a Mack truck.

Another daughter, Lydia (Kristen Stewart), seems to be making bad choices both in her romantic life and as a budding stage actress. What happens next? We’re not told.

Husband John (Alec Baldwin) bears every crisis with a preternatural calm, even when he’s planning to pull up stakes from New York and move to a job at Minnesota’s Mayo Clinic. Surely he must have strong emotions about his wife’s illness. But, if so, they’re never shown.

Having always been defined by her intellect and adept use of language, Alice is sometimes reduced to making speeches about her frustration. “Sometimes I can see the words hanging in front of me and I can’t reach them, and I don’t know what I’m going to lose next.”

She learns to get by using her cellphone as a reminder of tasks, and the online game “Words With Friends” to shore up her vocabulary.

Alice has also made a video giving her future self instructions on how to take her own life. Her eventual attempt to do so goes awry. Yet any moral or even dramatic ramifications from this line of conduct are ignored in the movie’s final — and perhaps most glaring — default.

The film contains mature themes, including suicide, a few references to body functions and fleeting crass language. The Catholic News Service classification is A-III — adults. The Motion Picture Association of America rating is PG-13 — parents strongly cautioned. Some material may be inappropriate for children under 13.

NEXT: Roll your eyes at ineptitude of ‘The Boy Next Door’