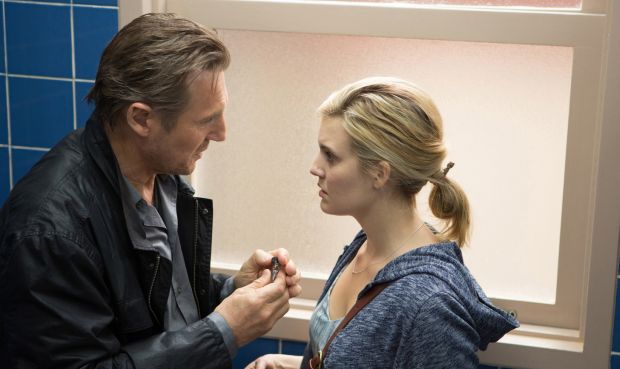 Though director Olivier Megaton tones down the intense violence that marked the previous films in this action series, his lackluster sequel fails to engage viewers sufficiently to make them care much about anyone on screen. That includes the franchise’s front man, Liam Neeson, who reprises his role as former covert agent Bryan Mills.

A veritable Job among retired cloak-and-dagger types, poor old Bryan seems destined never to be left in peace. The first installment in his saga saw his teenage daughter Kim (Maggie Grace) abducted by Albanians; the second found no-goodniks of the same ethnicity out to snatch his whole clan.

Enter Bryan’s ex-wife Lenore (Famke Janssen) just long enough to express dissatisfaction with her current hubby Stuart (Dougray Scott) — and vague notions about a reunion with Bryan — before turning up with her throat slashed in circumstances that point to Bryan as the culprit. So much for a Taylor-Burton subplot.

Along with exonerating himself, Bryan is out to protect Kim from becoming Malankov’s next victim. That’s just as well because, as early scenes have revealed — but as Bryan has yet to learn — Kim, now a college student, is dodging bullets for two.

Kim’s situation eventually leads to a brief discussion of the choice she and her barely glimpsed boyfriend are facing. While it’s never made clear whether the decision at hand concerns marriage or the fate of the couple’s child, circumstances move in a morally acceptable direction.

Bryan himself, by contrast, moves at times in the manner of a human cyclone, recklessly endangering pursuing police as well as civilian bystanders in his efforts to evade capture. But then again, what’s a jackknifed truck, a runaway shipping container and a multi-vehicle pileup on the freeway when Bryan’s chance to prove he didn’t slit his beloved Lenore’s jugular is at stake?

The film contains considerable action violence with minimal gore, a premarital situation resulting in pregnancy, adult dialogue including a possible reference to abortion, a half-dozen uses of profanity as well as at least one rough and several crude terms. The Catholic News Service classification is A-III — adults. The Motion Picture Association of America rating is PG-13 — parents strongly cautioned. Some material may be inappropriate for children under 13.