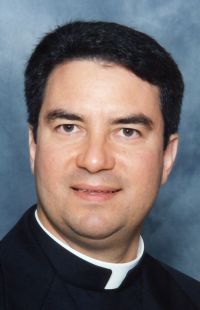 LAS CRUCES, N.M. (CNS) — Bishop Oscar Cantu of Las Cruces rejected the claims of an advertisement in the local Las Cruces Sun-News daily newspaper that maligned the work of an interfaith group funded by a Catholic Campaign for Human Development grant to raise the city’s minimum wage.

The ad, sponsored by the Catholic Coalition of New Mexico, said the treasurer of the group, called NM CAFe, “organizes pro-abortion rallies, insinuating she uses church funds for these pro-abortion purposes,” according to an op-ed essay by Bishop Cantu addressed to Catholics that appeared Jan. 25 in the Sun-News.

“This is false,” Bishop Cantu said. “If it were true, it would be quite scandalous,” he added. “CAFe as an institution does not support abortion. It does not take a stand on abortion, since it is an interfaith organization with individuals and institutions that hold differing views on the issue.”

“As your bishop, I do not take lightly to the efforts of anyone driving a wedge between my flock and me, as this ad attempts to do,” he said. “The shepherd protects the flock from wolves, and I will try to do so no matter what shape or form they take.”

He added, “I will not be bullied into compromising the legitimate work of social justice of the church or allowing someone to lead the flock astray.”

Bishop Cantu said that during the minimum-wage debate, he had encouraged some Catholic parishes to talk with CAFe on the issue. The organization, he said, “represents a variety of creeds, but works on social justice issues that affect families and that can be agreed upon by the members.”

As a condition of gaining CCHD funding, the grant requires the recommendation of the local bishop. CCHD is the U.S. bishops’ domestic anti-poverty initiative.

“The ad intentionally obfuscates the facts,” the bishop said, and “intentionally misleads readers, while ignoring other important facts.”

The City Council in Las Cruces, New Mexico’s second-largest city, voted 4-3 last June to raise the minimum wage from New Mexico’s $7.50 hourly rate to $8 an hour in July, and to $8.50 next January.

In his op-ed, Bishop Cantu said some Catholics had approached him after the vote took place “complaining about CAFe. I listened carefully to their complaints. I thanked them for bringing their concerns directly to me. I evaluated the issues at hand and determined that those issues, while not to be ignored, did not warrant breaking ties with CAFe nor ceasing to sponsor the organization.”

Bishop Cantu added, “I am also in dialogue with Sarah Nolan, the executive director of CAFe, so that we can work through some of the legitimate concerns that have been raised. I have found her receptive and cooperative.”

“The Catholic Church is pro-life, reverencing and defending human life in the womb, in the home, in the workplace, on the hospital bed, until one’s last breath is taken,” he said.

The bishop said Steve Fish, whose name appears with that of the Catholic Coalition of New Mexico as sponsoring the ad, was not one of those who had approached him with any concerns.

“I do not like writing these kinds of messages, and I likely would not have had to if Mr. Fish and the Catholic Coalition of New Mexico had approached me directly with their concerns. I invite Mr. Fish and the CCNM to meet with me so that we can discuss these issues,” Bishop Cantu said.

“I do hope their concerns extend to the common good of our communities, especially the marginalized, including the working poor — a most troubling moral and social issue in southern New Mexico,” he added.” If their goal is simply to confuse Catholics with misleading ads, then shame on them. I do not want to assume their expressed concern for the unborn was used simply to exact retribution against CAFe for its work on behalf of the working poor. That would be quite shameful.”

PREVIOUS: Father Merton at 100: Still inspiring people to get closer to God

NEXT: New film ‘Black or White’ aims to ‘start the conversation’ on race