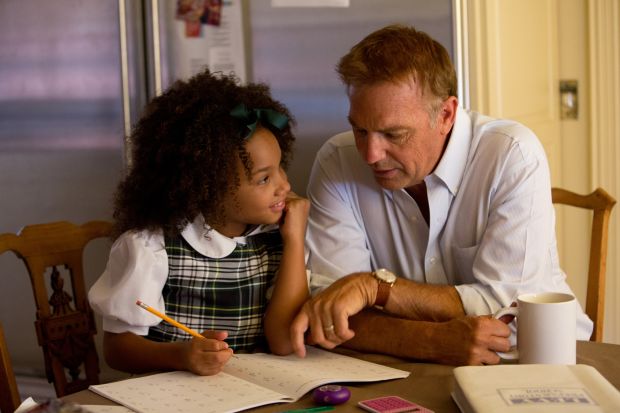 Kevin Costner and Jillian Estell star in a scene from the movie "Black or White." The movie aims to "start the conversation" on race, and while not an overtly religious film, its creators and stars say it addresses what might be called faith-based values such as the importance of family, the need for compassion and the power of love. (CNS photo/Relativity)

BEVERLY HILLS, Calif. (CNS) — It is not an overtly “religious” film. Other than a brief funeral scene inside of a church early in the film, there is no mention of God, or of a particular faith or religion.

And yet, “Black or White” is, according to its makers and stars, clearly a film that addresses what might be called “faith-based” values and behaviors — the importance of family, the need for compassion and forgiveness, the power of love, and the call to respect and value one another.

In “Black or White,” inspired by true events in the life of writer-director Mike Binder, a biracial child named Eloise (Jillian Estell) is the subject of a court custody battle between her white paternal grandfather, Elliott (Kevin Costner), with whom she has spent her life, and her black maternal grandmother, Rowena (Octavia Spencer). Both grandparents love Eloise deeply and, in fact, get along relatively well with one another.

But Elliott, a successful attorney living in an affluent Los Angeles neighborhood, believes that Eloise is better off living with him, though he has just suffered the loss of his wife, with whom he has raised Eloise after the girl’s mother (Elliott’s daughter) died while giving birth.

Rowena, a successful businesswoman and matriarch of a large extended family living in South Los Angeles, believes Eloise is better off surrounded by loving aunts, uncles and cousins.

The battle is complicated by the sudden appearance of Eloise’s absentee father, Reggie (Andre Holland), trying to overcome a history of drug addiction that fires Elliott’s determination to keep Eloise with him. But Elliott’s own struggles with alcohol, and his temper, threaten to undermine his efforts.

“Ultimately,” said Spencer at a Jan. 21 news conference in Beverly Hills to promote the film, “these people have to figure out what is best for the child, not what’s best for themselves.”

And, said Binder, it is important to note that “neither Elliott nor Rowena do anything that is not right for the child, even as they disagree with one another.”

The process of determining “what is best” provides a number of what Binder called “come to Jesus” moments for all of the central adult characters in the film, as they are forced to deal with their own attitudes about race and lifestyle, even as they question one another’s motives.

“Part of the human condition is being able to empathize with someone we don’t know, someone whose life experience is different from ours,” said Costner, like Spencer (“The Help”) an Academy Award winner (“Dances With Wolves”).

And that’s where Elliott struggles.

“The world Rowena provides is a world that Elliott doesn’t completely understand,” said Costner. “He’s just afraid of it, afraid of South Central. He knows his own world and he thinks his fence and his alarms will keep Eloise safe.”

Costner, who as co-producer helped arrange financing for “Black or White” when its prospects for getting made were in doubt, said that his involvement was decided when the first page of the script “started to sing,” and every page thereafter told him “I wished I’d have written this.”

“As actors, we have a chance to say things that make an impression on people, in a way that sticks with them forever,” he said. “And that made me nervous, because I knew I had to get it right. I knew what was at stake.”

Spencer said that Costner’s determination to “get it right” was both inspiring and evident throughout the entire cast and crew during the making of “Black or White.”

“To see the preparedness and team spirit during the making of this film made this a magical experience for me,” she said with a smile.

Viewers, said Spencer, may well feel conflicting emotions for both Rowena and Elliott, that there is no clear hero or villain in the film.

“Whether you’re with Elliott and against Rowena, or if you’re with Rowena and against Elliott, by the end of the movie, if you can’t find your way to the middle, there’s something wrong,” she said.

In his review of the film, John Mulderig of Catholic News Service said “Black or White” makes for “an intelligent interlude” but “fails to register a lasting impact.”

The CNS classification is A-III — adults; it “contains brief bloodless violence, a drug theme, incidental affirmation of a same-sex marriage, mature references, several uses of profanity, at least one rough term and frequent crude and crass language.” The Motion Picture Association of America rating is PG-13 — parents strongly cautioned. Some material may be inappropriate for children under 13.

At the Beverly Hills news conference, Binder said the film’s theme of addressing conflict with an eye to the future could well be a metaphor for what is taking place in the country, especially since “Black or White” appears at an especially key moment in America’s discussion of race relations.

“In this film,” he said, “there are two families who have a lot of grudges that they’ve got to let go of, for the sake of this little girl. Well, when you look at what is going on in our country today, it seems to me that whatever we do, whatever we believe, we’ve got to make sure that we teach our kids how to come together and resolve our disagreements and our issues for the sake of our future generations.”

His own life experience — helping raise his deceased sister-in-law’s biracial child with the father’s family in two distinctly different neighborhoods — motivated the making of “Black or White.”

“I wanted to do a piece about where we go forward in race relations in this country,” he explained. “This film, hopefully, will start those kinds of conversations that we need to have.”

NEXT: Campaign aims to fight ‘modern-day slavery’ of human trafficking