Father Merton at 100: Still inspiring people to get closer to God 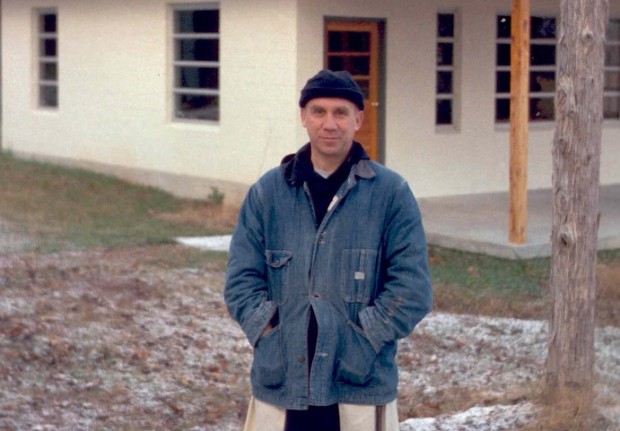 Trappist Father Thomas Merton, one of the most influential Catholic authors of the 20th century, is pictured in an undated photo. Devotees of the monk, who died in 1968, have planned various observances of the 100th anniversary of his birth, Jan. 31. (CNS photo/Merton Legacy Trust and the Thomas Merton Center at Bellarmine University)

WASHINGTON (CNS) — When Trappist Father Thomas Merton addressed persistent racism in his writing during the 1960s, his message seemingly reached into the future.

Appealing to society to recognize that all people are children of God, Father Merton questioned practices that prevented African-Americans from achieving full equality and called for the end of discrimination in all forms.

It was just one of the priest’s stances on important social issues, encompassing race relations, militarism and war, consumerism and the burdens posed by technology.

Father Merton’s concerns are as pertinent today as they were when he wrote about them half a century ago, said Paul M. Pearson, director of the Thomas Merton Center at Bellarmine University in Louisville, Kentucky, on the eve of the centennial of the Trappist’s birth, Jan. 31, 1915.

“He speaks to us because everything he has to say is as applicable now as when he wrote it,” Pearson told Catholic News Service from the center, which serves as a research center and the repository of nearly all of the late Father Merton’s poems, essays, correspondence and notes.

“Those social issues he addressed, I think he would be horrified that we’re still dealing with them, that nothing has changed,” Pearson said.

The center will host the 14th general meeting of the International Thomas Merton Society June 4-7.

Researchers and theologians suggest that Father Merton’s social concerns stemmed from a deep spirituality and an unending quest to find God. Some consider him a mystic and believe he deserves to be declared a doctor of the church. St. John XXIII and Blessed Paul VI were among church leaders who regularly turned to his writing for inspiration.

His challenging childhood and his upbringing and visits to various locales, including France, Italy, New York (after his mother’s death) and England shaped the young Merton as much as his gradual discovery of the love of God after years of an unsettled, and at times promiscuous, life as a young adult.

Merton entered the Trappists — formally the Order of Cistercians of the Strict Observance — in Gethsemani, Kentucky, Dec. 10, 1941, three years after being baptized in the Catholic Church. He found the structured and prayer-filled life of a monk appealing. The monastery was a place where he could think about life — and contemplate the presence of God.

Father Merton’s massive autobiography, “The Seven Storey Mountain,” an assignment from his superior who recognized his desire to be a writer, raised his profile among people searching in their lives. Originally published in 1948, the year before Father Merton’s ordination, the work has sold more than 1 million copies and has been translated into more than 15 languages, according to the Thomas Merton Center.

A prolific writer, Father Merton over the course of 20 years wrote hundreds of poems, dozens of essays, thousands of letters and numerous books. He is acknowledged by scholars and theologians as perhaps the most influential Catholic author of the 20th century.

“He’s a wonderful writer and poet. He gives you the sense that God is present, God is close and God walks with us,” said Christopher Pramuk, associate professor of theology of Xavier University in Cincinnati.

Today, decades after his Dec. 10, 1968, death from electrocution in Bangkok while on pilgrimage to better interfaith understanding with Eastern religions, Father Merton’s works continue to be studied; new books reprinting his letters and essays continue to be published.

In cities around the world, groups of Merton devotees through the International Thomas Merton Society meet for silent prayer and discussion of the Trappist’s works.

“He was the one who took contemplation and contemplative prayer out of the monastery,” said Ursuline Sister Donna Kristoff, coordinator of the Cleveland chapter, one of 39 in the U.S. and eight overseas. “He was one of the first ones to show that this is basic Christian practice, that all people need to learn to sit quietly, to find solitude and peace to find God within.”

“He bequeaths these paths to us so that we can actually find them. He did make the path by walking. There was nobody in front of him. No cultural conditions. No family. He did this great pilgrimage of search,” said Sister Kathleen, a member of the Congregation of Notre Dame and director of the school’s Iona Spirituality Institute.

The institute premiered a documentary on the Trappist’s life Jan. 28. “The Many Storeys and Last Days of Thomas Merton” was part of a program marking the centennial of his birth.

Christine Bochen, professor of religious studies at Nazareth College in Rochester, New York, and a founding member of the international Merton society, has edited the Trappist’s work for publication. She has found the “richness of his personality” evolving over his two decades of writing.

“What is absolutely fascinating to me is that he could see what so many could not,” Bochen said. “He’s withdrawn in a sense, living in a monastery in rural Kentucky, but he could read what the Second Vatican Council called signs of the times. He had a deep wisdom and understanding of what was happening in the world.”

Father Merton’s words also appeal to new audiences today. Paul E. O’Connell, professor of criminal justice at Iona College, said students in his classes integrate their understanding of Father Merton, who they have discovered in Sister Kathleen’s classes, in his courses.

He told CNS that students are interested in contemplative prayer and meditation and find that it relieves stress in their over-booked, high-pressure lives. “They want to be able to consider themselves as just a person, to think there’s a possibility of simpler time, that you can relate to other people without all these pressures. They just open up.” O’Connell said.

In a 1984 documentary funded in part by the Catholic Communication Campaign, author Paul Wilkes explored the monk’s struggles that led to the realization life that the answers to life’s mysteries rest in discovering God. Since reading Father Merton’s autobiography in high school, Wilkes has found that the monk’s lasting appeal rests in the familiar voice in which he examines basic questions about life.

“It’s like he’s in the room with you,” Wilkes said.

The Rev. Lars Adolffson, a Church of Sweden minister, is coordinator of the Swedish Thomas Merton Society. He said Swedes appreciate the monk’s “gentle style” and the joy he finds in discovering God.

“In the search for God, he doesn’t force you,” Rev. Adolffson told CNS. “He doesn’t make any hard strains toward people. He notes how God will act in your life in a positive way.

“He has something to tell us.”

In New Zealand, Merton followers planned to commemorate the Trappist’s birth with a Jan. 31 pilgrimage across Christchurch.

Charles Shaw, who works in the Catholic Education Office of the Diocese of Christchurch and is a member of New Zealand’s chapter of the International Thomas Merton Society, told CNS the daylong observance will take participants to sites important to Father Merton’s heritage. Silent and public prayer was to be offered at Carmelite Monastery of Christ the King, Christ’s College and Waimairi Cemetery where several Merton family members are buried.

In “The Seven Mountains of Thomas Merton,” author Michael Mott related that Father Merton wrote to a monk in New Zealand describing the country as “a kind of homeland” even though he had never visited.

Shaw’s uncle studied under Father Merton at Gethsemani. At one point, the monk asked his uncle to ask Shaw’s parents to visit and his relatives at their home in Christchurch.

“He draws people in because of his writings,” Shaw said. “He covers a vast range of topics. He’s perceptive. He’s funny. He’s sometimes annoying. You see the person shining through.”

More information about the Thomas Merton Center and the International Thomas Merton Society can be found online at www.merton.org.

NEXT: Bishop defends work of CCHD-funded group in minimum-wage debate