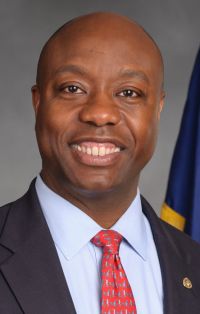 WASHINGTON (CNS) — Republican Sen. Tim Scott of South Carolina shared some anecdotes about his school days during a Jan. 27 event in Washington where he announced that a top goal for him in the new Congress is school choice and expanding access to quality education.

At an event sponsored by the American Enterprise Institute, he announced his new legislative “Opportunity Agenda,” which includes a bill in favor of school choice initiatives, which was introduced in the Senate later that day.

Scott talked about his own struggles in public secondary school, remarking on the irony that he failed high school civics his first time around, then went on to discuss his belief that “access to quality education is a must” and that America is “spending record amounts on education without seeing record results.”

“I personally don’t believe in any ‘silver bullets’ in education,” Scott said, but he recalled the story of a young girl with special needs from his home state who, after finding a school that adequately addressed her needs, was able to “blossom” and thrive and now holds “not a job, but two jobs.”

His bill is the Creating Hope and Opportunity for Individuals and Communities through Education Act, or S. 1909. It would seek to “expand opportunities and foster success by providing students and parents greater choice when it comes to education” because Scott “strongly believes that … every student should have access to the school that best suits their unique needs.”

When asked by Catholic News Service how his CHOICE Act would affect parochial schools and faith-based home-schooling groups, Scott said they are “not specifically targeted” in the bill, but that he and his colleagues “will continue to look for ways to improve the choice of and access to quality education,” because “the more choices parents have in their children’s education, the more chances the children have to learn and succeed.”

Scott, an evangelical Christian, made history last November as the first African-American from the South to be elected to the U.S. Senate since Reconstruction. He’s also the first African-American to be elected to both the House and the Senate. He was a House member when Gov. Nikki Haley appointed to the office after former Sen. Jim DeMint resigned in November 2012. Scott had to run for election in 2014 to fill the last two years of DeMint’s term.

Scott also discussed school vouchers, stating that while he would, “in (a) perfect world, like to see a voucher system where funds could be used for both public and private schools,” he wasn’t sure about the viability of a private school voucher proposal in Congress, nor had he “come to a conclusion about what I will advocate for publicly.”

Currently, 13 states and the District of Columbia have some form of a school voucher program and just as many have instituted some form of educational tax credits supporting the creation of scholarships for K-12 students.

In New York, Gov. Andrew Cuomo has included in his budget the Education Tax Credit, passed by the state Senate.

New York Cardinal Timothy M. Dolan Jan. 21 welcomed the action, saying: “We have been told by Democrats and Republicans at the highest level of state government that this tax credit is a ‘no brainer,’ and we are overjoyed that a clear path toward enactment has been put in place.”

The tax credit is critical for “the future countless children across this state,” because “expanding educational opportunities is a clear matter of social justice,” said the cardinal, who also is president of the New York State Catholic Conference, the public policy arm of the state’s bishops.

John Schoenig, of the University of Notre Dame’s Program for Educational Access, told CNS in a May 2013 interview that as more states use vouchers or tax credits, it improves the likelihood of other states adopting them.

“The more we can demonstrate success,” he noted, “the easier it is to debunk the myths out there and to say it is in our best interest to put educational choice on the table.”

The Notre Dame program was formed in 2010 to conduct research, training and outreach efforts to help low-income families obtain financial access to a faith-based education.

NEXT: Father Merton at 100: Still inspiring people to get closer to God