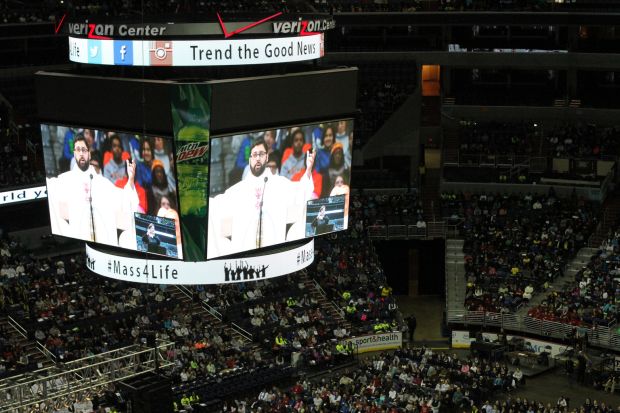 An image of homilist Father Mario Majano of Our Lady of Sorrows Parish in Takoma Park, Md., is projected on the main scoreboard at the Verizon Center in Washington during a pro-life youth Mass Jan. 22. Thousands of young people gathered at the arena to rally and pray before participating in the annual March for Life. (CNS photo/Gregory A. Shemitz)

WASHINGTON (CNS) — Just as the sun rose Jan. 22, thousands of Catholic teenagers and young adults from across the country poured into the Verizon Center to meet other pro-lifers, pray for the unborn and celebrate the joy of being alive at the annual Youth Rally & Mass for Life.

Many, like Megan Holzmeister, who attends a Catholic high school in Kansas City, Kansas, found that the combination of prayer, song and celebration kept them wide awake in the early morning hours.

“The atmosphere is amazing,” she said. “With all the young kids, it keeps it fun and upbeat, and it’s a great opportunity to meet people.”

Before the Mass, several youths in brightly colored, coordinated sweatshirts joined the long Dunkin Donuts line before hopping into the equally long line for the sacrament of penance.

Others took pictures in the photo booths, and then tweeted them out along with hashtag #Mass4Life or hashtag #iStand4Life to show an online witness.

Young adult Grace Duffley and her adopted brother, Chris, serenaded the crowd with “Hold Me” by Toby Mac and Jamie Grace, and then Chris, who is autistic and blind, sang and played “Open the Eyes of My Heart” on the piano.

The youth leadership team, consisting of teens from youth groups in parishes around the archdiocese, led the Verizon Center in praying the Luminous Mysteries of the Rosary.

Washington Cardinal Donald W. Wuerl, the main celebrant at the Mass, was joined by hundreds of priests and religious as well as dozens of bishops who traveled with their young people to Washington. 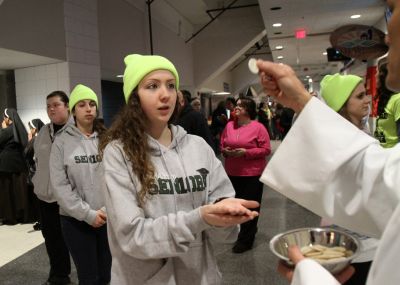 In his homily, Father Mario Majano, a parochial vicar at Our Lady of Sorrows Parish in Takoma Park, Maryland, said he considered a true hero to be someone who spoke up for the truth again and again. He gave an example of a woman who had three crisis pregnancies and chose life every time.

In one instance, her child was conceived in rape, and another child had the possibility of being born deformed because of the cancer treatment she was undergoing at the time. However the child was born healthy and grew up alongside her two siblings.

“So thanks, Mama,” said Father Majano, looking over to his mother in the crowd. Everyone stood and applauded.

Eleventh-grader Abby Durniat from Atlanta said in an interview that she was pro-life because the doctors told her parents to abort her twin sisters, believing they would have mental disabilities. Her parents refused, and her sisters were born without any disabilities.

“I don’t know where I’d be without them,” Abby said, looking over at her sister Ally. Even though her sisters were born healthy, Abby said she believes in the value of a human life no matter what obstacle or disability faces a child.

After the rally and Mass, the participants headed over to the National Mall for the annual March for Life, marking the 42nd anniversary of the Roe v. Wade decision.

Mary Archer and Seth Tavera, students at The Catholic University of America, were there selling T-shirts that featured a pro-life quote from Pope Francis. The proceeds from the sales were going toward the students’ mission trips to Costa Rica, Belize and Jamaica.

Archer and Tavera also were there with around 300 to 400 other Catholic University students to show their support for life. “Life is an inalienable right and it’s a tragedy that abortion is legal,” said Archer. “Plus, who doesn’t love little babies?”

Di Mauro is on the staff of the Catholic Standard, newspaper of the Archdiocese of Washington.

NEXT: Increase in sex trafficking expected during gridiron, golf tournaments