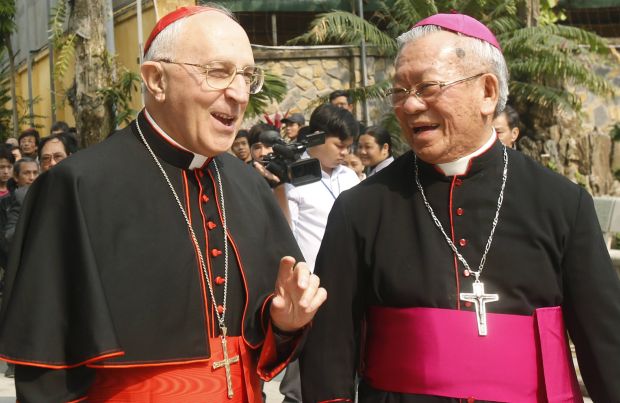 VATICAN CITY (CNS) — Vietnam’s cardinal-designate sees hope and continuing challenges ahead for the church in a nation that still has to fully embrace religious freedom.

Cardinal-designate Pierre Nguyen Van Nhon of Hanoi, 76, said he saw Pope Francis’ decision to induct him into the College of Cardinals as a reflection of the warming relations between the Vatican and the communist state of Vietnam.

Because of continued dialogue and high-level exchanges of visits between the two sides, “we can see there have been efforts to hold productive dialogue,” he said in a report published by Radio Free Asia in early January, after Pope Francis announced he was among 20 men who would become cardinals Feb. 14.

“Such dialogue requires patience and sincerity. I’ve seen obvious efforts from the Vatican, as well as from the government (of Vietnam). The direction looks positive, but the path is still long and we need time,” he said.

Cardinal-designate Nhon said while he thinks Catholics are generally optimistic about improving freedom of religion in the country, how much freedom they experience currently “depends on the locality and timing.”

“During certain times, some issues may arise that don’t at others. There may be problems in one place though not in others. However, in general, I see positive signs,” he said.

He has been asking the government to help facilitate acquiring land “for religious purposes” and the freedom to take part in developing education and health care.

The Vatican and Vietnam do not have formal diplomatic relations, but the two sides agreed in 2013 to the appointment of a nonresident papal representative for Vietnam as a first step.

Some provinces were still experiencing rights violations, including violent attacks against Catholics and Protestants in Kon Tum in 2012 and 2013.

The U.N. representative said government authorities hold a “dismissive, negative attitude toward the rights of minorities and individuals practicing religion outside of the established channels.”

Vietnam has an estimated 6 million Catholics, making them the second-largest religious community after Buddhists in a nation of 93.4 million people.

He was ordained a priest Dec. 21, 1967. He worked at local seminaries from 1968 to 1975, after which he served as pastor of Da Lat cathedral and vicar general of the diocese.

When he was named coadjutor bishop of Da Lat in 1991, his was the first ordination of a bishop in southern Vietnam since the communist takeover in 1975. The ceremony, held at the Da Lat Coliseum, had to be authorized by the Vietnamese government and was covered by government radio and television.

St. John Paul II named him bishop of Da Lat in 1994, at a time of strong Vatican criticism against the government’s policy of requiring the clearing of all nominations for bishop.

Cardinal-designate Nhon was elected president of the Vietnamese bishops’ conference in 2001 and served two consecutive terms, until 2013.

He led the conference at a time it was revamping its organizational structure to involve younger members and enlarge the scope of church activities — establishing new commissions for catechetics, church music and sacred arts, culture, evangelization, and charitable and social services.

PREVIOUS: Praying for victims in Niger, pope says no war can be waged for God

NEXT: Sainthood cause of Focolare’s founder officially opens in Italy