German bishops think sacraments should be OK for divorced, remarried 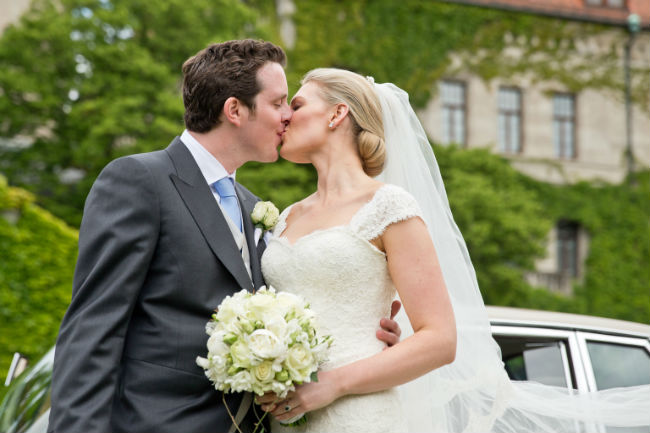 Newlyweds kiss after their wedding ceremony in late May in Stein, Germany. Germany's Catholic bishops have published a report detailing their views on marriage and family, which suggests most now believe sacraments should be available to divorced Catholics who remarry civilly. (CNS photo/Daniel Karmann, EPA)

OXFORD, England (CNS) — Germany’s Catholic bishops have published a report detailing their views on marriage and family; it suggests most bishops now believe sacraments should be available to divorced and remarried Catholics who do not have an annulment.

“This document contains reflections only and has no juridical power,” said Matthias Kopp, spokesman for the Bonn-based bishops’ conference.

He said the German bishops’ conference hopes “to offer its own theological contribution in this area. While we can give no information about any follow-up, the majority of bishops agreed with the timing of its publication.”

In late December, the bishops published “Theologically Responsible and Pastorally Appropriate Ways for Accompanying the Divorced and Remarried,” on the bishops’ conference website.

In a Dec. 30 Catholic News Service interview, he said the bishops had decided to delay issuing the report, prepared for the Oct. 5-19 extraordinary Synod of Bishops on the family, until the end of 2014. He said the bishops now would concentrate on preparing a formal submission to the worldwide synod assembly in October.

The report, drafted by a working group and approved by the German bishops’ permanent council in June, appeared Dec. 22 alongside official translations of recent synod documents and German responses to an October 2013 Vatican questionnaire to dioceses worldwide.

While a minority of bishops still believed such Catholics “on principle, could not be admitted to the sacraments,” the document added, all now agreed on the need to “intensify pastoral care” for them.

The report said the exclusion of divorced Catholics was “no longer comprehensible” to many priests, some of whom deliberately disregarded church rules in their pastoral work.

“For many Catholics engaged in church life, the pastoral care of faithful with a civil divorce and living in new unions is a test of the church’s credibility,” the document continued.

“The church’s teaching and pastoral work must uphold Jesus’s instruction on the indissolubility of marriage, but also his invoking of God’s mercy on those who are sinful.”

In a statement on the bishops’ website, Cardinal Reinhard Marx, conference president, said the report had been approved by a “large majority” of German church leaders.

He added that the search for pastoral approaches to the divorced and remarried was “one of urgent challenges facing the Catholic Church in its evangelization worldwide.

“Civil divorce and remarriage often cause people to distance themselves from the church, or widen the distance they already felt before divorce,” Cardinal Marx said. “It is not uncommon for this evolution to lead to the abandonment of the Christian faith, and this is why the German bishops’ conference wants to step up its pastoral outreach.”

In 2013, the Freiburg Archdiocese issued 20-page guidelines for making Communion available, although these were rejected in in an October 2013 letter by then-Archbishop Gerhard Muller, prefect of the Vatican Congregation for the Doctrine of the Faith.

However, in his website statement, Cardinal Marx said most now concurred that the question of re-admitting them to sacraments “could not be excluded” from pastoral discussions “if Jesus’ message of love is to be heard.”

“For the German bishops, it would not be just to admit all believers whose marriage has broken down and who’ve remarried without distinction,” the bishops’ conference president added.

“By reason of their pastoral experience and on the basis of their theological reflection, they are pleading above all for differentiated solutions, which will respond equitably to each case and permit readmission under certain conditions.”

The accompanying summary of Vatican questionnaire responses said most Germans viewed Catholic views of family life as “too idealistic and unrealistic,” while church teaching on premarital sex, homosexuality, divorce and contraception were “virtually never accepted.”

It added that a third of marriages ended in divorce in Germany, with around half involving minor-age children, and said Catholic marriages were only slightly “more stable than average.”

The summary said most divorced Catholics considered their separation and new relationship “morally justified” and viewed their consequent exclusion from sacraments as “constituting unjustified discrimination and being merciless.”