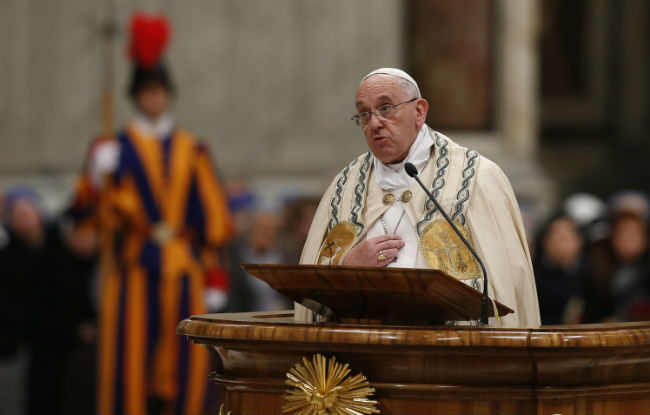 While God is eternal, time is important even to him, Pope Francis said during a prayer service New Year’s Eve in St. Peter’s Basilica. “He wanted to reveal himself and save us in history,” becoming human to demonstrate “his concrete love.”

As a strong winter wind blew outside, Pope Francis ended 2014 celebrating evening prayer with eucharistic adoration and Benediction, and the solemn singing of the “Te Deum,” a hymn of praise for God’s blessings.

At the end of a year, like at the end of life, he said, the church teaches its members to make an examination of conscience, “remembering all that happened, thanking the Lord for all the good we received and were able to do and, at the same time, remembering where we were lacking and our sins. Give thanks and ask forgiveness.”

Speaking specifically as bishop of Rome to others who have the honor of living in the city and the responsibility of participating in its civic life, Pope Francis said Christians must have “the courage to proclaim in our city that the poor must be defended and that we do not need to defend ourselves from the poor, that the weak must be served and not used.”

Pope Francis made specific mention of the Rome corruption scandal that became public in early December; investigators claim millions of dollars’ worth of public contracts were awarded for waste management, housing immigrants and other programs, but the services were never provided or were not at the levels called for by the contracts.

“The serious incidents of corruption that recently emerged require a serious and conscious conversion of hearts for a spiritual and moral renewal,” the pope said, “as well as for a renewed commitment to building a city marked by justice and solidarity where the poor, the weak and the marginalized are at the center of our concern and our daily action.”

While God created humanity to be his children, he said, original sin and its remnants continue to distance people from God, often making them slaves who follow “the voice of the Evil One.”

God sent Jesus to ransom sinners from their slavery, the pope said, which gives rise to an essential question in one’s examination of conscience: “Do we live as children (of God) or as slaves?”

“Do we live as people baptized in Christ, anointed by the Spirit, ransomed and free?” he asked. “Or do we live according to worldly logic: corrupt, doing what the devil wants us to believe is in our best interest?”

Pope Francis told those gathered in the basilica that all people, even Christians, have “a tendency to resist freedom; we fear freedom and, paradoxically, we prefer slavery” although often people are not aware that that is what they are doing.

“Freedom frightens us because it places time before us and, with it, the responsibility to live it well,” he said. “A nostalgia for slavery nests in our hearts because it appears more reassuring than freedom, which is much riskier.”

Slavery focuses just on the moment, he said, making people forget their past, but also robbing them of hope for the future.

“Slavery makes us believe that we cannot dream, fly or hope,” the pope said.

The end of a year, he said, is a reminder that there will be a “final hour” and all people will be judged, particularly on how they used their freedom and how they cared for the poor.

When the poor and weak are cared for and helped to claim a place in society, they are “a treasure for the church and society,” he said. “But when a society ignores the poor, persecutes them, criminalizes them” or forces them into a life of crime, “that society impoverishes itself” and “ceases to be Christian.”

After the prayer service, despite the cold, Pope Francis went into St. Peter’s Square to pray before and view up close the Nativity scene. With hundreds of people huddled behind barricades, he spent about 20 minutes greeting the crowd, as well as offering a personal “Happy New Year” and handshake to the Italian police officers on duty.

NEXT: Pope names 15 new cardinal electors, most from global South