U.S. bishops’ group travels to Iraq, meets with those who fled ISIS 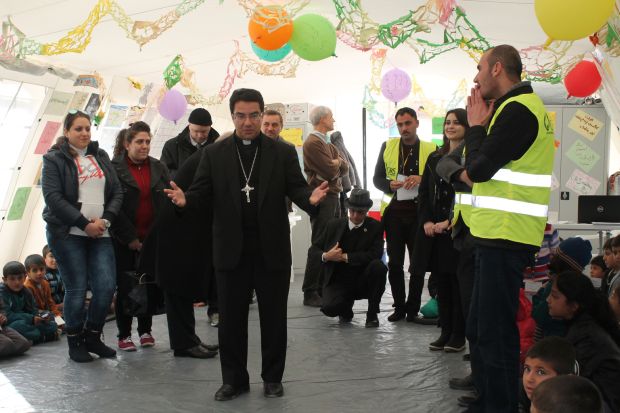 Bishop Oscar Cantu of Las Cruces, N.M., chats with displaced Yezidi children Jan. 20 outside of Dohuk during a recent visit to the Kurdistan region of Iraq. He told them that American children are praying for them and their families. (CNS photo/Dale Gavlak)

AINKAWA, Iraq (CNS) — One of Iraq’s Christians chased out of her historic homeland quietly prayed the rosary as a bishop who traveled halfway around the world to meet her and others displaced celebrated Mass for them.

“It’s a journey of encountering God, the poor and the dispossessed,” Bishop Oscar Cantu, chairman of the Committee on International Justice and Peace of the U.S. Conference of Catholic Bishops, told the gathering in this predominantly Christian enclave in Irbil, capital of the northern Kurdistan region.

Bishop Cantu traveled to northern Iraq with a USCCB delegation Jan. 16-20 to see the needs of displaced Christians and other religious minorities. The delegation plans to share its findings and views with policymakers on Capitol Hill.

The elderly woman, wearing a traditional long robe, sat transfixed during the homily, silent except for the clicking of her rosary beads.

Tears welled up in her eyes as she remembered having to escape her mainly Christian village of Qaraqosh in August after it was brutally attacked by Islamic State militants.

Now, she lives in poverty among 113 families in a tent camp erected in a tiny park outside the St. Ellial Chaldean Catholic Chapel. Deeply traumatized, many feel lost.

All are dependent on church assistance, and they wonder what future awaits them. The Islamic State onslaught forced them to leave behind possessions in a quick escape where the choice was conversion to Islam or death.

The Kurdish region is hosting more than 800,000 Iraqi religious minorities fleeing Islamic State terror, according to the United Nations. 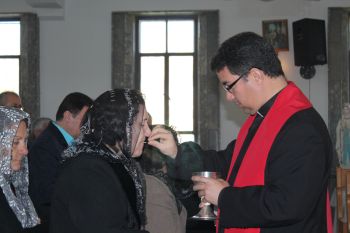 “It’s a journey of encountering Christ, walking with him and falling in love with him,” said Bishop Cantu, who heads the Diocese of Las Cruces, New Mexico.

The words were reminiscent of those spoken by another displaced Iraqi Christian, who said that Jesus told him to ‘”Come and follow me.”

“Pray as we encounter the many displaced and uprooted from their land and for the many responding to their needs in a beautiful way,” said Bishop Cantu, referring to vast Catholic charity work undertaken by Iraq’s parishes and international Catholic aid agencies.

“Continue to tell their stories as an encounter with God,” Bishop Cantu said.

That’s exactly what Stephen Colecchi, who directs the USCCB Office of International Justice and Peace, and Kevin Appleby, director of USCCB Office of Migration Policy and Public Affairs, plan to do with U.S. policymakers, Catholic leaders, congregations and supporters.

Here are a few of the stories they may be sharing.

While Iraqi Catholics in Ainkawa recently celebrated three new deacons set to enter the priesthood as a sign of renewed hope for the future, the area’s Chaldean Catholic archbishop expressed deep concerns.

Archbishop Bashar Warda of Irbil estimated 60 Iraqi Christians, many qualified professionals, are fleeing the country daily in the belief that “peace will not return.”

“Unless we do something for those who are persecuted and forgotten, we are going to lose more people,” he warned of the weakening Christian presence in their ancestral land, one of the world’s oldest Christian communities.

An elderly Christian man told the group that one of his sons recently traveled to Jordan in the hopes of reuniting with another son, who lives in Detroit.

The U.S. and other Western embassies reportedly have said that they do not expect to grant resettlement to Iraqi Christians. The displaced inside Iraq are not considered refugees and may have possibilities for work, although those sheltering in remote villages lack such opportunities or the needed transportation.

But those who have sought shelter in one of Iraq’s neighboring countries are refugees. And those with direct family members in the West may also apply for family reunification.

Given the Vatican’s position urging Christians to remain in the Middle East, Appleby said the delegation would focus on the “most vulnerable who are impoverished with less resources to stay.” In this case, the USCCB would advocate for more direct assistance from the U.S. Agency for International Development and other programs to help the displaced inside Iraq.

“We are encouraging the government to increase humanitarian assistance, provide the right kinds of assistance through the proper channels, so it actually gets to the people,” said Colecchi.

“One of the positions our conference has taken is the most vulnerable ones — who have lost a breadwinner or have members that are very sick who might not be able to ever go back — if they can’t, the church wants to be in a position to advocate for them with our government,” Colecchi added.

Archbishop Warda said serious efforts were needed to rid Mosul, Iraq’s second-largest city, of Islamic State militants who have made it their stronghold. He also urged increased U.S. coalition military operations against the extremists, saying this may be the only way to achieve the goal.

Turning to the youth, the archbishop said that displaced students have been forced to abandon their studies due to no available places in schools or not enough schools, leaving many in despair for their future. He called for the establishment of a Catholic university and other educational institutions in Irbil.

UNICEF, the U.N. children’s agency, has advocated education as one of the best ways to restore normalcy to children’s lives torn apart by conflict.

Bishop Cantu advocated policies based on the “strength of families, their dignity, ability to work and have an identity.”

He told the displaced Iraqis a story from Gaza, where the group began its Mideast visit, saying the story speaks widely for all those suffering in the region.

“During the war the (high school) student got an email asking if he needed food, clothing, shelter,” Bishop Cantu said. “He said: ‘I don’t need those, but yes, the people do. But more than anything, what we are looking for is dignity.'”

NEXT: Sainthood cause for Focolare founder formally begins