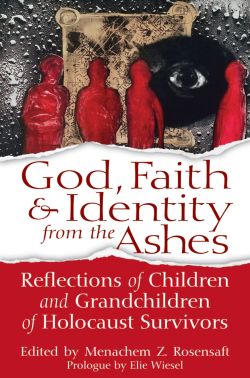 Catholic readers will be taken into the collection “God, Faith & Identity From the Ashes” and deeply into themselves, finding spiritual nourishment in the continuing faith of descendants of Jewish survivors of the Shoah and their determination to affirm their Jewishness and to dedicate their lives to helping others.

It is rare that a book features a prologue by Elie Wiesel and an email sent to the editor by a pope. Pope Francis’ email was occasioned by a sermon Rosensaft had given at a synagogue in 2013, which narrated his experience as a child of survivors and his belief in God’s presence even in Auschwitz, in the acts of kindness given by Jews to one another, enabling some to survive.

Rosensaft affirmed the ethical duty of Jews after the Holocaust to do good for others. The sermon was sent to the pope by the director of the Latin American Jewish Congress.

Pope Francis wrote: “When you, with humility, are telling us where God was in that moment, I felt within me that you had transcended all possible explanations and that, after a long pilgrimage, you came to discover a certain logic and it is from there that you were speaking to us; the logic of First Kings 19:12, the logic of that ‘gentle breeze’ that constitutes the only possible hermeneutic interpretation. Thank you from my heart. And, please, do not forget to pray for me. May the Lord bless you.”

The “gentle breeze” comes to the prophet Elijah in a time of need. First there is a great wind, then a great fire, then an earthquake. The Lord is in none of these but in the whisper that follows. Pope Francis is saying that Jews, survivors and their children, hear the voice of God as did the biblical prophets, and that we Christians must listen to their proclamation and heed its message.

The pope’s letter helped to firm up the resolve to gather and publish the almost 90 statements contained in this book.

The authors are accomplished in many fields. Some, like Yossi Klein Halevi, are authors whose family stories of survival imbue their works. Some, like Eva Fogelman, are psychologists whose family memories help contemporary trauma victims. The grandfather of one, Clarence Schwab, worked with Raoul Wallenberg and even negotiated with Heinrich Himmler, to save thousands of Jews. Others, like Abie Ingber, have dedicated their lives to interreligious dialogue.

Many, such as David Harris of the American Jewish Committee, work not only for Jewish causes but for causes that will foster human dignity and democratic values around the world. Many honor the Righteous Gentiles, such as Tali Zelkowicz, who praises the “unpredictable kindnesses” of the Catholic nuns who hid her grandmother and 62 other Jews in their convent in France. All have grappled with the depths of human evil and have come to affirm the best in human nature, and in themselves.

One can understand this book as a series of profound spiritual reflections, and as a challenge to living life morally. Jews today are a living Torah, continuing the biblical witness to all.