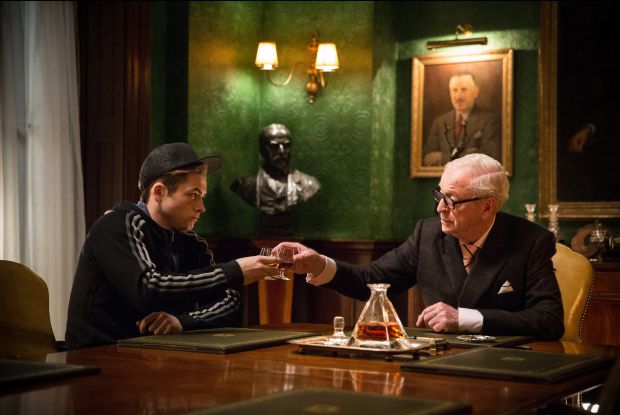 Terribly British to its core, the film is, at one level, an amusing sendup of classic espionage movies, with agents wearing bespoke suits and displaying impeccable manners even as they kill bad guys with a dazzling array of cool gadgets.

Unfortunately, “Kingsman” is too pseudo-sophisticated for its own good, and goes off the rails with unbridled mayhem and vulgarity. Some of the action sequences, including one of a congregation massacred inside a church, display a profound lack of taste, not to mention cinematic judgment.

That’s a pity, as the film offers a positive message for wayward youth on achieving reform by learning to look out for others.

Colin Firth stars as Harry Hart, code-named “Galahad.” Hart’s moniker reflects the fact that the members of the top-secret Kingsmen organization, to which he belongs, consider themselves a new breed of knights in shining armor (or at least pinstripes).

This “independent international intelligence agency,” overseen by Arthur (Michael Caine), is headquartered behind a tailor’s shop on London’s Savile Row.

The Kingsmen are commanded to find new, more youthful recruits. Galahad seeks out Eggsy (Taron Egerton), a troubled hooligan unaware that his late father was a Kingsman who died saving Galahad’s life.

Galahad pledges to redeem this sacrifice by helping the young man. “If you’re prepared to adapt, and learn, you can transform,” he tells Eggsy.

“You mean like ‘My Fair Lady’?” the lad responds.

Indeed, under Galahad’s tutelage Eggsy gets the ultimate makeover. The initiation rituals, supervised by Merlin (Mark Strong), resemble the feats of strength and wit seen in a number of teen-empowerment pictures lately.

There’s no time to lose, as the world is at risk (naturally) from a megalomaniac named Richmond Valentine (Samuel L. Jackson). Convinced that climate change is caused by overpopulation, Valentine — perversely inspired by the story of Noah and the great flood — decides the best remedy for environmental woes is to cull the human race.

So he hands out free cell phones (how modern!) embedded with a computerized booby-trap designed to wreak mayhem.

“Kingsman” carries this ridiculous premise to queasy extremes. However tongue-in-cheek their presentation, the gruesome proceedings become so awash in blood that even many adults will likely be repelled.