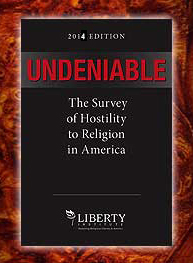 WASHINGTON (CNS) — A new report from the Liberty Institute in Plano, Texas, shows that incidents of “religious hostility” have more than doubled in the United States over the past three years.

The report, “Undeniable: The Survey of Hostility to Religion in America, 2014 Edition,” chronicles a series of more than 1,300 court cases recently handled or monitored by the institute, a nonprofit legal group that represents plaintiffs who feel their religious liberty has been violated.

“The freedom to openly exercise your faith is under intolerant, growing, damaging attack,” reads the opening statement. “If this hostility is not identified, defeated and deemed socially unacceptable, then we will forfeit the benefits of religion and freedom. We will risk watching our freedom and our American way of life destroyed.”

“A lot of people think that this only happens in China or North Korea,” Justin Butterfield, editor-in-chief of the survey, told Catholic News Service. “We published ‘Undeniable’ to get people to realize that religious persecution is something that happens here in the United States.”

The new edition of the report has four main sections: attacks on religious freedom in the public arena, in academic settings, against churches and ministries, and in the military.

“The thing to remember is that not only are these attacks on liberty becoming more numerous, but the types of cases we’re seeing are getting worse,” said Butterfield. “I never would have imagined that a presidential administration would argue in favor of protecting religious belief but not religious action and practice, but that’s exactly what the government did in the Hosanna-Tabor case.”

He was referring to the government’s lawsuit over a Lutheran school’s firing of a teacher. In its 2012 decision in Hosanna-Tabor v. EEOC, the court unanimously rejected the government’s attempt to more narrowly define who is a religious employee and upheld a “ministerial exception” to federal anti-discrimination laws. The case is included in the “churches and ministries” section.

Documentation in the survey includes citations from court cases, news stories and reports from various organizations.

The “public arena” category of the survey describes challenges to praying in public, publicly displaying Nativity scenes or menorahs, and displaying the Ten Commandments. A legal challenge to prayers delivered prior to town council meetings in Greece, New York, reached the U.S. Supreme Court. Last May, the court ruled 5-4 that the prayers in Greece did not violate the Constitution.

The category also includes the federal requirement that most employers cover contraceptives for their employees among high profile attacks on religious liberty. Dozens of challenges to the mandate continue to make their way through the courts. Most employers, including religious ones, are required to cover employees’ artificial birth control, sterilization and abortion-causing drugs, even if employers are morally opposed to such coverage.

As an example of attacks on religion in a school or academic setting, the survey described the case of a third-grader who was told he could not include a religious message in the goodie bags that he was bringing to a party to share with his classmates. In another case, a Houston-area school district banned religious items at Christmas and Valentine’s Day cards that contained religious content. In both instances the courts ruled on allowing religious messages.

Regarding the military, the report recalls the case of Air Force Senior Master Sgt. Philip Monk, who after 19 years of service was relieved of his position and reassigned because of his views on marriage.

It said that when Monk returned from a deployment to Lackland Air Force Base in San Antonio, he had a new commander who was openly gay. She asked his views on same-sex marriage. He declined to answer but she insisted, the report said, and after he said he believed in the “biblical view of marriage,” she had him reassigned despite his “spotless record.”

When he reported the situation to his superiors, Air Force investigators initially charged him with making false official statements. Eventually the charges were dropped and he was awarded the Meritorious Service Medal.

A Military Times news story in August 2013 said the Air Force had found Monk’s claims to be unsubstantiated and that while he had made false claims, he had not violated any sections of the military code. The Air Force claimed Monk was already scheduled for a change in duties and his confrontation with his superior had nothing to do with that.

However, in a statement issued in October 2013, the Liberty Institute disputed the Air Force’s findings and said it stood by Monk.

Another example of religious hostility in the military was the instance of an informational slide listing Catholicism, evangelical Christianity and other religious groups along with Hamas and al-Qaeda under the heading of “Religious Extremism” that was used in a training briefing for a group of about 100 Army Reserve soldiers. After religious leaders complained to Army officials, it was removed.

There are a variety of reasons for increased religious hostility, according to George Yancey, professor of sociology at the University of North Texas and co-author of “So Many Christians, So Few Lions: Is There Christianophobia in the United States.”

“My research suggests a certain willingness of Americans to dehumanize conservative Christians. Yet many of these individuals also espouse a desire for religious neutrality,” he told CNS. “So how do we reconcile these two concepts? I discovered in my research that these individuals, who tend to be white, male, wealthy, highly educated, politically ‘progressive’ and nonreligious, tend to use mechanisms that can be justified for nonreligious reasons but have a disparate impact upon Christians.”

Regarding religious freedom on campuses, Yancey said some colleges require the leadership of student groups to be open to individuals of all faiths. “In theory, this is religiously neutral but in practice it punishes religious groups that take seriously the tenets of their faith,” he said. “So those with Christianophobic tendencies can hide their possible bigotry with measures that punish Christians but ones for which they can also find nonreligious justification.”

“People have confused the two clauses and created clauses about church and state that aren’t even in the Constitution,” he explained. “This is another reason we started publishing this survey, not only to educate people about hostility toward religion, but also educate employers, school officials, and government officials about what the Constitution actually does say in regard to religious liberty.”

But the survey’s executive summary says “there is hope” on the religious freedom front.

“When those who value religious liberty actively engage in the cultural and legal battle against secularism, they push back the secularists’ agenda,” it reads. “Those organizations that have pushed back in the HHS (Health and Human Services) mandate cases have stopped the government from forcing businesses to decide between abandoning their religious beliefs or going out of business.”

In an open letter to the American people that is included in the 393-page document, Liberty Institute president and CEO Kelly Shackelford called for Americans to “make the restoration of liberty a personal and national priority.”