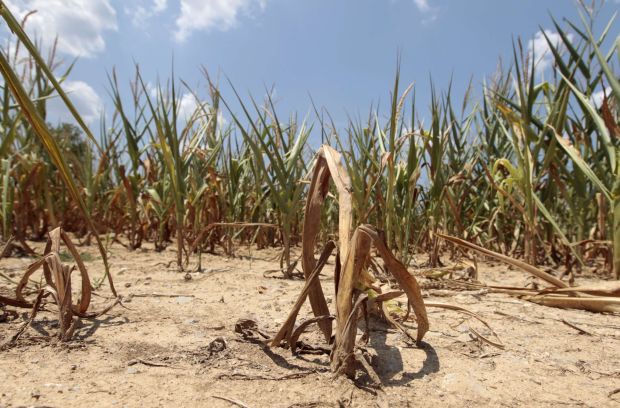 WASHINGTON (CNS) — Religious leaders from across the faith spectrum gathered Feb. 20 at the Capitol to seek action to combat climate change and to mitigate its effects, whether it be at the federal level or in local communities.

The ongoing buzz about the forthcoming encyclical from Pope Francis on the environment was addressed by Archbishop Thomas G. Wenski of Miami, chairman of the U.S. bishops’ Committee on Domestic Justice and Human Development.

“This is the first time a pope has addressed the issue of the environment and climate change with an encyclical — and for us Catholics and not only for Catholics, this is a big deal,” Archbishop Wenski said, noting, “Encyclicals are an important way for popes to exercise their teaching office.”

Archbishop Wenski added, “Although I am not privy to what the pope will say, I think he will insist that the ‘natural ecology’ is inseparably linked to ‘human ecology.’ In other words, we have to recognize the interrelatedness of the various social, economic, political or environmental crises that confront the human family today.”

The archbishop made the comments as part of a panel sponsored by the National Religious Partnership for the Environment and held in a meeting room at the U.S. Capitol Visitor Center in Washington.

Given what Pope Francis has said in the past on the environment, “I think that he will call us to prudent action that promotes the common good for present and future generations and respects human life and dignity while always giving priority to the poor and vulnerable,” Archbishop Wenski said.

“Care for creation should engage us all — and thus I also think that the pope will tell us also to be mindful of and heed the voices of poor who are impacted most by climate change and certainly will be impacted either for good or ill by the policies proposed to address climate change.”

At their essence, the archbishop said, “these all are moral crises which require new rules and forms of engagement — in other words, a rethinking of the path that we are traveling down together.”

Bishops are not scientists, Archbishop Wenski cautioned, “but we are pastors — and insofar as climate change affects concrete human beings, it is a moral issue; and, pastors in exercising their care of their flocks do weigh in — and appropriately so — on moral issues. Also, as Catholics, we firmly believe that the poor have a first claim on our consciences in matters pertaining to the common good.”

Archbishop Wenski alluded to past statements on the environment by Pope Benedict XVI and the U.S. bishops’ own 2001 statement, “Global Climate Change: A Plea for Dialogue, Prudence and the Common Good,” in which “we expressed our concern that disproportionate and unfair burdens not be placed on poor, developing nations. We called for collective action for the common good.”

The Rev. Emilio Marrero, vice president of national programs at Esperanza, an umbrella group for Hispanic evangelicals, said evangelicals “believe that salvation bears fruit,” and that God wants to see “evidence” of faith “through our actions.”

Rev. Marrero cited Matthew 25:36 as saying that Christians should be “concerned for the least of these,” as climate change tends to more adversely affect those with less means to adapt to its impact. “In Mexico, 1 million people have been forced to leave their land because of climate change and the desertification of their pastures,” he added.

Rabbi Dobb said he is the father of two children, ages 10 and 5. “I have stewardship over them,” he said, “but that does not mean I can frack them, or strip-mine them.” The same is true, he said of the earth: “The earth is God’s and the fullness thereof.”

The Rev. Carroll Baltimore, first vice president of the Progressive National Baptist Convention, quoted the Rev. Martin Luther King, who also was a Baptist, as saying, “An injustice anywhere is a threat to justice everywhere.” African-Americans, Rev. Baltimore said, make up only 12 percent of the U.S. population, but suffer disproportionately from the effects of climate change.

“Majorities of blacks and Hispanics live in counties with a bad quality of air,” he said. And he cited U.S. Census statistics showing “there are 65 percent fewer African-American women living in New Orleans” than there were before Hurricane Katrina struck in 2005.

NEXT: How to bridge divides in multi-ethnic parishes