Payday lending a top obstacle to financial independence for the poor 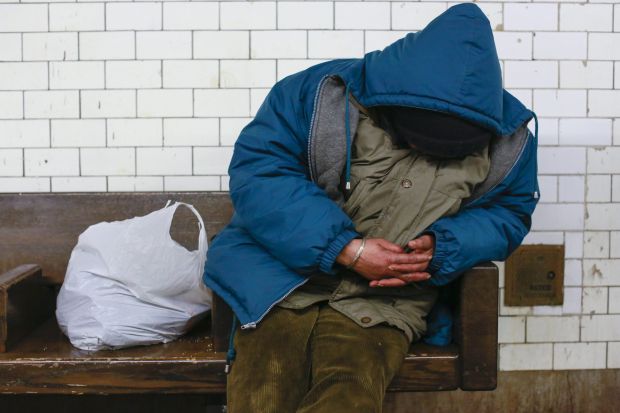 A man sleeps on a subway bench in Brooklyn, New York, Feb. 10. Payday lending is seen as a top obstacle to financial independence for the poor. (CNS photo/Shannon Stapleton, Reuters)

That’s what’s happening today in the payday lending industry. The federal Consumer Financial Protection Bureau is expected to issue some proposed regulations, perhaps as early as the end of February, to rein in an industry that does $46 billion in business each year.

Molly Fleming, who is leading a payday reform campaign for the PICO National Network, told of how the food pantry at Christ the King Parish in Kansas City, Missouri, became aware of the payday lenders in their community.

“They saw a doubling and tripling of need at this food pantry,” Fleming told Catholic News Service. Workers at the pantry asked those coming in, “Why? What’s the new need? What’s the reason you’re coming in?” The answer was payday lending, a “new product nobody had ever heard of, charging hundreds of dollars of interest a week they couldn’t afford.”

Payday lending is just one form of usurious lending being practiced. Car-title loans, also with triple-digit interest rates, have caused some borrowers to lose their cars. “For working-poor families in particular, your car equals your job. You lose your car, you lose your job. You can’t afford to default on the loan and lose your car, even though that has happened, many, many times,” Fleming said.

Consumer installment loans, which once raised eyebrows when the interest rate charged was 36 percent, are also under scrutiny as interest rates on these in some states have jumped to 200 percent.

“Lack of savings or access to banking services leads some families to rely on payday loans and check cashing services that prey on financial insecurity and a lack of understanding to trap working families under mountains of debt,” said February issue brief, “Family Security and Stability,” from the U.S. bishops’ Office of Domestic Social Development.

The Catechism of the Catholic Church likewise takes a dim view of this kind of economic exploitation: “Even if it does not contradict the provisions of civil law, any form of unjustly taking and keeping the property of others is against the Seventh Commandment: thus, deliberate retention of goods lent or of objects lost; business fraud; paying unjust wages; forcing up prices by taking advantage of the ignorance or hardship of another,” it says.

Payday lending is just the latest scheme to separate people from their money, according to, Eva Schulte, director of Communities Creating Opportunities, founded in 1977 by Father Norman Rotert, who died in December, when he was pastor of St. Therese Little Flower Parish in Kansas City, Missouri.

Back then, as Father Rotert’s all-white congregation began to change with increasing numbers of African-Americans, “he saw how fear was able to divide people. Realtors were able to use that fear and ‘turn’ houses that they could flip because white families fled,” Schulte said, taking a lower price while the real estate agent sold the houses to African-American buyers at their true market value.

What the exploiters didn’t realize, according to Schulte, was that Father Rotert was “a parish priest committed to racial justice.” He got his real estate license and bought houses himself, she said. When “he found out that wasn’t enough,” Schulte added, he founded Communities Creating Opportunities.

Payday-lending critics mounted a petition drive to cap payday-lending interest rates — currently 1,925 percent — at 36 percent on the Missouri ballot in 2012. Although they got twice as many signatures as required, “the payday lending industry basically beat us in the courts,” Fleming said, with successful challenges to half the signatures — “fake signature collectors” paid for by the industry, she charged, and “bullies” who she said stole 5,000 signatures from a car a week before the petitions were due.

In Kansas, Catholic Charities in Salina developed a program where troubled borrowers could take their debts to a “microloan” program, said Jane Stenson, senior direct for poverty reduction strategies at Catholic Charities USA. The microlender pays off the debt to the payday lender, then issues a loan to the borrower at a better interest rate and payback plan.

Payday lenders typically require loans to be paid back in two weeks — the next payday. If the borrower doesn’t have the money, he or she will have to take out a new loan. And the cycle repeats. “If you don’t have it today, you don’t have it in two weeks,” Schulte said. “It’s designed to keep people in debt.”

Payday borrowers tend not to have accounts with banks because they live from paycheck to paycheck to cover household expenses.

Not that it would matter much, according to Janine Carreiro-Young, deputy director of the Massachusetts Communities Action Network, another payday-loan battler.

“The truth is most of them (payday lenders) are backed by big banks,” she said. “In Kansas, most of the ones in a particular area were backed by Bank of America. It’s like a shell corporation.”

Carreiro-Young outlined other stumbling blocks for the poor to reach financial independence.

Even though her native Massachusetts passed a law to raise the state’s minimum wage to $11 an hour, the 2015 minimum hourly wage is just $9. “And in Massachusetts, you can’t live on $19,000,” she said, which is what someone would make before taxes working at the minimum wage 52 weeks a year, 40 hours a week.

Except that getting a full-time job can be dicey. Even at a major unionized supermarket chain in Massachusetts, “one doesn’t have a set schedule. You can’t get more than 30 hours a week,” Carreiro-Young said. “Imagine you’re a person trying to raise a family. It’s unrealistic to assume that a person can survive on that. They have to piece together two or three part-time jobs.

“My own experience in high school, if I had to say, ‘I can’t work on such-and-such a day,’ the more and more they would start cutting your schedule and you have less (working) time.”

Even getting a job poses problems.

“With the welfare system and the way it’s set up, the day somebody gets a job, they start losing access to all sorts of support services — food stamps, (supports for) single moms. Between paying for day care and paying for health insurance, it doesn’t even make financial sense to try to take one of these jobs,” Carreiro-Young said. “The system is set up in such a way that it’s impossible for them to get ahead.”

PREVIOUS: Preaching must be engaging to be effective, archbishop says at congress

NEXT: Work now underway on $400 million Museum of the Bible in Washington