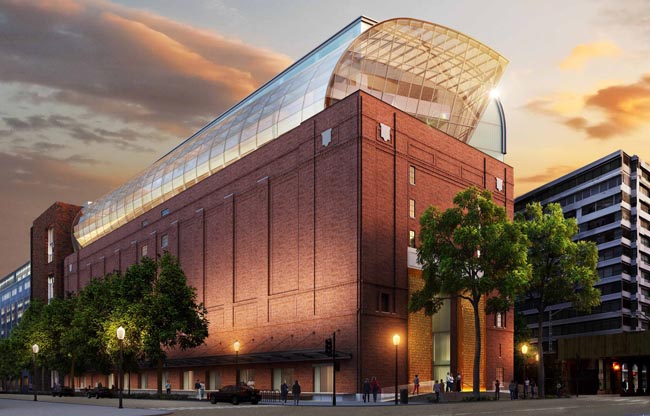 This architectural rendering shows how the Museum of the Bible planned for Washington will look. Opening in 2017, the eight-story, 430,000-square-foot museum is being designed by the lead architect group that created the International Spy Museum, the Smithsonian's National Museum of the American Indian, and the soon-to-open National Museum of African American History and Culture. (CNS photo/courtesy Smith Group JJR)

WASHINGTON (CNS) — On a gray and overcast morning in Washington, just a short walk from Capitol Hill, construction work began on a museum intended to promote engagement, education and discussion of the Bible.

The 430,000-square-foot museum will feature a 200-foot LED screen on the lobby ceiling, displaying a set of rotating images from Israel, Rome and Spain.

It also will have a facade modeled after various printed manuscripts of the Bible, stained-glass windows from Germany, and a top-floor, glass-enclosed promenade that will offer “some amazing views” of the National Mall and the Capitol, according to project director Brian Flegel.

“D Street and the area around it are going to be getting a bit of a ‘facelift'” as a result of the construction, Flegel told the media Feb. 12 at the groundbreaking while showing proposed designs of the eight-story, $400 million museum.

It also will have an environmentally sustainable “green roof,” a “biblical garden” and a “Foods of the Bible” restaurant, which will be “inspired by the bazaars and markets of the Middle East.”

The site of the Museum of the Bible — founded and funded by the family that owns the Hobby Lobby chain of craft stores — is a historic warehouse near the Federal Center and just two blocks south of the National Mall. The building was purchased for $50 million in July 2012 by the museum’s board.

Architectural plans call for restoring the exterior of the building, originally built in the 1920s as a refrigeration warehouse for the District of Columbia, and gutting the interior to build the museum’s various features. It is scheduled to open in November 2017.

During the news conference, workers demolished an addition made to the building in the early 1980s. 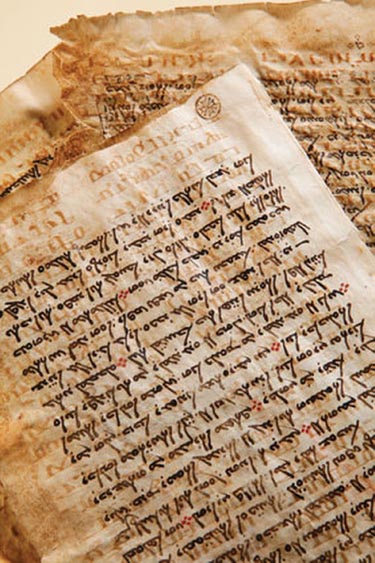 Using new technology, the University of Oxford scholars uncovered the earliest surviving New Testament written in Palestinian Aramaic, a language similar to that used by Jesus. The Museum of the Bible planned for Washington will house an extensive collection of biblical manuscripts. (CNS photo/courtesy Museum of the Bible)

“People ask why we do this. We believe that it’s such an important part of our daily life that we should focus our time and efforts so that other people can be engaged with the Bible, just as we are.”

Most research and scholarship done at the museum will be done by the Green Scholars Initiative, its research arm, which currently has “a select group of senior research scholars from academic institutions around the world who are conducting primary research” on ancient artifacts and manuscripts.

The exhibits will feature pieces from several different libraries around the world, as well as the museum’s own private collection. The Museum of the Bible currently boasts “the largest private collection of biblical manuscripts and artifacts” on earth, according to Summers.

“We have collected over 44,000 items over the past several years” said the chairman of the board, Steve Green, which includes “Dead Sea scrolls fragments, Gutenberg portions, and papyrus fragments” among others.

Currently, many of the artifacts in the collection are undergoing study, and many more are on display in various exhibits in cities around the world and at colleges and universities throughout the U.S.

Green, who also is the president of Hobby Lobby, said that he hopes the museum will be a way for all people to learn about and engage with the Bible, regardless of faith or theological expertise.

When asked if the museum’s goal was to bring people to Christianity, he answered that “we would hope that people would consider what the book has to say … if it’s compelling, then that’s a decision they can make on their own.”

Green gained national prominence in June when the U.S. Supreme Court ruled his family-owned company does not have to comply with the Affordable Care Act’s contraceptive mandate; the family legally challenged the mandate on the grounds it violates their religious beliefs as Christians. Green also has developed a Bible education curriculum that is being used in some public schools.

According to a news release, the “Museum of the Bible invites all people to engage with the Bible through museum exhibits and scholarly pursuits.” The website www.museumofthebible.org encourages the public to donate to the project, which is being paid for solely by private funds.

When questioned about concerns that it would have a specific religious or denominational agenda, Summers assured the media that the museum is taking a “very nonsectarian approach” to its development, which includes “many different Jewish, Catholic and Protestant groups.”

In addition to working with Catholic groups, the museum also has a “very strong working relationship” with the Vatican Museums and the Vatican Library, according to Summers. “We’ve had two of our moving exhibits on display there. They’ve loaned us items and vice versa. We also have some of their people involved with us as advisers to this museum.”

“It’s very exciting to see this project getting started,” Green said. “It’s something that we have been working on and dreaming about for five years now. It’s been a dream and it’s becoming a reality today.”

PREVIOUS: Payday lending a top obstacle to financial independence for the poor