‘A burqa made of flesh’: Vatican looks at challenges women face 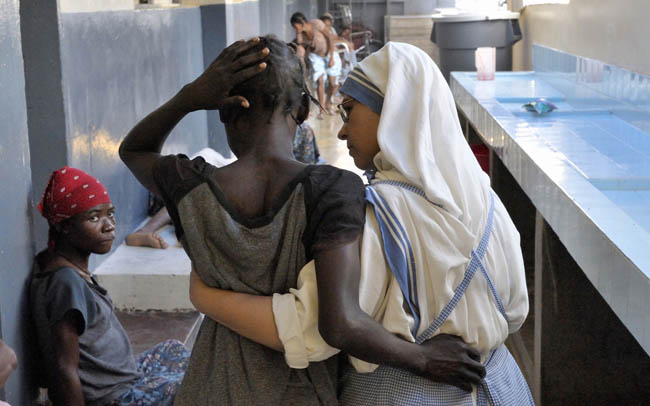 Spanish Missionary of Charity Sister Paul supports a patient in 2009 at the House for the Dying in Port-au-Prince, Haiti. The Vatican's Pontifical Council for Culture will include women in a panel examining challenges women face in societies around the world, including in the church. (CNS photo/Paul Jeffrey)

VATICAN CITY (CNS) — Violence against women, cultural pressures regarding women’s physical appearance, attitudes that subjugate women or that ignore male-female differences and the growing alienation of women from the church in some parts of the world are themes the Pontifical Council for Culture is set to explore.

The council, whose members are all cardinals and bishops, has chosen to discuss the theme, “Women’s Cultures: Equality and Difference,” during its plenary assembly Feb. 4-7. A document outlining the theme was published in late January, and four women involved in writing it joined Cardinal Gianfranco Ravasi, council president, at a news conference Feb. 2 at the Vatican.

The cardinal announced to the press that he was planning to establish within his office a special group of female consultants to provide women’s opinions and points of view on a variety of issues.

He also noted that if priests had to follow the Jewish rules for a quorum for prayer — 10 men must be present — many of them would not be able to celebrate daily Mass, even though there would be dozens of women present in the church.

The council’s discussion document, drafted by a group of Italian women and women who have lived in Italy for years, looked at the continuing quest to find balance in promoting women’s equality while valuing the differences between women and men; the concrete and symbolic aspects of women’s potential for motherhood; cultural attitudes toward women’s bodies; and women and religion, including questions about their participation in church decision-making.

“‘Plastic surgery is like a burqa made of flesh.’ One woman gave us this harsh and incisive description,” the document said. “Having been given freedom of choice for all, are we not under a new cultural yoke of a singular feminine model?”

The council said the theme was chosen “to identify possible pastoral paths, which will allow Christian communities to listen and dialogue with the world today in this sphere,” while recognizing that in different cultures and for individual women the situation will be different.

While cautioning against generalizations, the document rejects the notions that there are no differences between men and women, and that each person “chooses and builds his-her identity; owns him-herself and answers primarily to him-herself.”

In preparing the document and the plenary discussions, the council sought input from women around the world. However, the process was not without criticism, particularly for the English version of a video featuring an Italian actress, Nanci Brilli, asking women to send in their experiences. Many women felt the use of a heavily made-up actress ran counter to the point of seeking input about the real lives of most women. The council quickly took the English version off YouTube.

At the news conference, Brilli said, “as a woman, a professional, a mother, I feel like this is the first time we have been asked for our opinion” by the church. “The women who responded do not want to be cardinals, but want to take part in the discussion.”

Participating for a year in the group that drafted the document, she said, was such a positive experience that it led to a renewal of her faith, but also to a willingness to do the video and open herself to comments. Some people, she said, instead of wanting to dialogue, “felt represented by making insults. That’s their problem.”

Cardinal Ravasi said the reactions from across Europe were mainly positive and garnered a variety of helpful input about women’s concerns, but in Anglo-Saxon countries, especially the United States and Canada, the reaction focused so strongly on the video — and not on women’s concerns and experience — that they decided to pull it.

Everything he’s done, he said, has garnered strong reaction ranging from enthusiasm to “those who even found satanic dimensions” in what he was doing. Some feel a need to take part in a discussion “by yelling,” he said.

In the section on women and the church, the document described “multifaceted discomfort” with images of women that are no longer relevant and with a Christian community that seems to value their input even less than the world of business and commerce does.

Many women, it said, “have reached places of prestige within society and the workplace, but have no corresponding decisional role nor responsibility within ecclesial communities.”

Council members are not proposing a discussion of ordaining women priests, the document said and, in fact, statistics show ordination “is not something that women want.” However, it said, “if, as Pope Francis says, women have a central role in Christianity, this role must find a counterpart also in the ordinary life of the church.”

The vast majority of Catholic women today do not want a bishop’s “purple biretta,” it said, but would like to see church doors open “to women so that they can offer their contribution in terms of skills and also sensitivity, intuition, passion, dedication, in full collaboration and integration” with men in the church.

The preparatory document looked at how much pressure women face regarding their body image and the way women’s bodies are exploited in the media, even to the point of provoking eating disorders or recourse to unnecessary surgery.

“Plastic surgery that is not medico-therapeutic can be aggressive toward the feminine identity, showing a refusal of the body in as much as it is a refusal of the ‘season’ that is being lived out,” it said.

“‘Plastic surgery is like a burqa made of flesh.’ One woman gave us this harsh and incisive description,” the document said. “Having been given freedom of choice for all, are we not under a new cultural yoke of a singular feminine model?”

The document also denounced violence inflicted on women: “Selective abortion, infanticide, genital mutilation, crimes of honor, forced marriages, trafficking of women, sexual molestation, rape –which in some parts of the world are inflicted on a massive level and along ethnic lines — are some of the deepest injuries inflicted daily on the soul of the world, on the bodies of women and of girls, who become silent and invisible victims.”

NEXT: With pope’s urging, Salvadoran bishops start talks with gangs