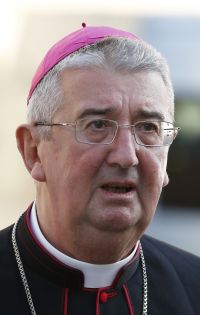 Irish Archbishop Diarmuid Martin of Dublin arrives for the morning session of the extraordinary Synod of Bishops on the family at the Vatican Oct. 8. (CNS photo/Paul Haring)

DUBLIN (CNS) — Archbishop Diarmuid Martin of Dublin said he would seek assurances from religious congregations operating in his diocese that they are rigidly following child protection guidelines after a fresh round of audits raised serious concerns.

In a statement Feb. 10, Archbishop Martin said it was “appalling” that some major religious congregations had delayed fully implementing the church’s child protection guidelines and that, in some cases, this process only really got underway in 2013.

The Irish church’s monitoring watchdog, the National Board for Safeguarding Children in the Catholic Church, published 16 reviews on the implementation of policies in religious congregations — eight male, eight female.

Teresa Devlin, the board’s chief executive, said she was “disappointed that for the majority of orders, the whole area of safeguarding is only being embraced in the last couple of years.”

She also said that, concerning seven of the male congregations, “there is considerable work to be done.” She was referring to the Franciscan Friars, Franciscan Brothers, the Servites, Passionists, Augustinians, Discalced Carmelites and the Marist Fathers.

The safeguarding board was established in a bid to restore public confidence in the church’s handling of allegations of abuse against priests and religious after a series of judicial reports uncovered serious failings. Four Irish bishops have resigned following severe criticism of their failures in relation to handling allegations of abuse.

Archbishop Martin said that while improvements have been made, especially by the current leadership of the congregations concerned, the failures and delays that have emerged point to “the need to ensure greater systems of accountability of church authorities in the area of child safeguarding.”

He said the Pontifical Commission for the Protection of Minors “noted clearly in the past days” that “part of ensuring accountability is raising awareness and understanding at all levels of the church regarding the seriousness and urgency in implementing correct safeguarding procedures.”

The archbishop warned that “survivors trying to regain their confidence in the church will be disillusioned once again” and “the many laymen and women who work voluntarily in church safeguarding structures in our parishes must feel disheartened.”

He said that he now intends to “meet with the superiors of all the religious congregations working in parishes in the Archdiocese of Dublin to verify once again the commitment of all these congregations to scrupulously applying the diocesan child safeguarding norms in every aspect of parish life.”