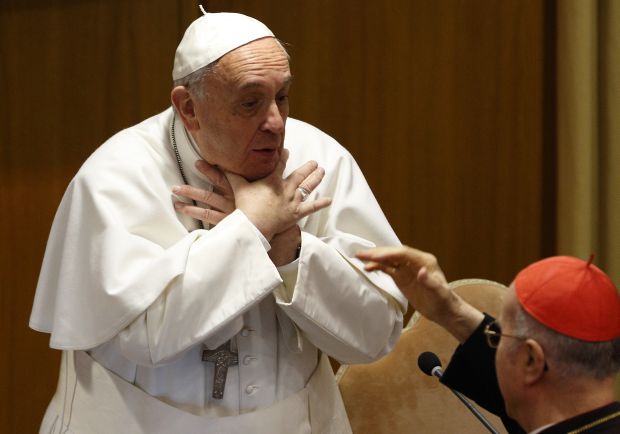 Pope Francis gestures as he talks with Cardinal Tarcisio Bertone before a meeting with cardinals and cardinals-designate in the synod hall at the Vatican Feb. 12. (CNS photo/Paul Haring)

VATICAN CITY (CNS) — Cardinals meeting at the Vatican discussed better ways to balance the responsibilities of local bishops and of the Roman Curia, said the Vatican spokesman.

A recurring theme in the cardinals’ Feb. 12-13 meeting was “what is it that is done best where,” Jesuit Father Federico Lombardi told journalists Feb. 13 during a pause in College of Cardinals’ discussions.

About 40 of the 164 cardinals present in the Vatican’s synod hall spoke Feb. 12 about the proposal to reform the Roman Curia, he said. A number of them brought up the subject of “decentralization” and “the relationship between the Curia and the local churches, the episcopal conferences” as a fundamental part of how best to serve the church and the world, Father Lombardi said.

Although no decisions were made and no vote was taken, he said, there was an emphasis on determining what tasks are best done where based on “competencies and knowledge of the situation” by either the Curia with its more “universal vision” or by dioceses and bishops’ conferences with their direct experience, he said.

Canadian Cardinal Gerald Lacroix of Quebec told Vatican Radio Feb. 13 that the Curia’s role must be to assist the pope and also be at the service of local dioceses.

Pope Francis “has said several times — so I’m not revealing any secret — that when a bishop comes here to the Roman Curia it should not be like going through customs. He comes here to receive support, guidance, the tools necessary to carry out his mission, encouragement.”

The Curia’s identity must focus on serving the church, helping it fulfill its mission and issuing “broad guidelines to clarify issues whether they are doctrinal, pastoral or liturgical,” he said.

Father Lombardi told reporters that cardinals also discussed the role of the laity, “in particular women and their presence in positions of responsibility in the Roman Curia.”

The cardinals’ morning session Feb. 13 was dedicated to explaining the work of the Secretariat and the Council for the Economy and the reform of the so-called Vatican bank. Boston Cardinal Sean P. O’Malley was to brief the cardinals that afternoon on the work of the Pontifical Commission for Child Protection.

Pope Francis opened the meeting saying the reform of the Roman Curia should promote “greater harmony” among the Vatican offices, not primarily to save money or promote efficiency, but to solidify the unity of the church and strengthen its ability to evangelize.

The pope arrived in the Vatican’s synod hall a half hour before the consistory was set to begin. Fewer than two dozen cardinals were there before him and the pope greeted them before standing at the front of the hall to welcome each of the others as they arrived.

Nineteen of the 20 churchmen Pope Francis was to induct into the College of Cardinals Feb. 14 were present — sitting in two rows behind the other cardinals. Retired Colombian Archbishop Jose de Jesus Pimiento Rodriguez, who turns 96 Feb. 18, sent regrets that he could not attend. Including those who were about to receive their red hats, the College of Cardinals has 227 members.

Pope Francis scheduled the meeting primarily to discuss with the cardinals the proposals his nine-member international Council of Cardinals had developed for the reform of the Curia.

The proposals include the creation of two new large, high-profile Vatican offices: the Congregation for Laity, Family and Life, and the Congregation for Charity, Justice and Peace, said Jesuit Father Federico Lombardi, Vatican spokesman. The charity and justice congregation would include the existing pontifical councils for health care and for migrants, but also would have a new section dedicated to “safeguarding creation.”

The proposed grouping, he said, flows from an understanding of “charity as fundamental to the essence, existence and mission of the church” and of working for justice “as a consequence” of charity. The special section for ecology reflects an increased concern and commitment on the part of the church to the need to protect creation.

The section also would work in the area of “human ecology,” or the idea that social and political environments can be deadly for the human person and for human dignity, he said.

“There is an ecclesial and theological vision” behind the planned combination of the pontifical councils involved and raising their profile to the level of a congregation, Father Lombardi said. “It is not just about taking certain offices and putting them together in order to reduce their number.”

The Second Vatican Council insisted on the important vocation and role of the laity in the life of the church, particularly in witnessing to Christ in the world. Just as there are congregations for bishops, for clergy and for religious, Father Lombardi said, it seemed “natural” to the Council of Cardinals that there would be a congregation for laity. Given the centrality of family life for many laypeople, it made sense to combine the two councils and to have the Pontifical Academy for Life conduct its work under the new congregation’s auspices, he said.

While the congregation would promote lay involvement in the church, Father Lombardi said, it is unlikely and almost “unthinkable” that a layperson would be appointed its prefect because the pastoral responsibilities of a Vatican congregation require that it be led by an ordained minister, usually a cardinal.

At the beginning of the meeting, Pope Francis reminded his brother cardinals that the reform was requested by the College of Cardinals during the meetings that preceded his election in 2013.

“The aim to reach is that of promoting greater harmony in the work of the various dicasteries and offices” of the Vatican, he said, in order to have “more effective collaboration with the absolute transparency that builds up authentic synodality and collegiality,” or shared responsibility under the pope’s leadership for the good of the whole church.

“The reform is not an end in itself,” he said, “but a way to give a strong Christian witness, to promote more effective evangelization, a more fruitful ecumenical spirit and encourage a more constructive dialogue with all.”

Pope Francis thanked the members of the Council of Cardinals and its secretary, Bishop Marcello Semeraro of Albano, who, the pope said, “is the one who does the work.”

In drawing up its proposals, he said, the council took into account “many suggestions, including those made by the heads” of the various Vatican congregations and councils.

Honduran Cardinal Oscar Rodriguez Maradiaga of Tegucigalpa, council coordinator, and Bishop Semeraro both made presentations to the cardinals about the council’s proposals.

The proposals, Pope Francis said, should “perfect” the work of the Curia and its main purpose, which is to assist the pope “in the exercise of his supreme pastoral office for the good and the service of the universal church and the particular churches.”

As he did at the beginning of the 2014 Synod of Bishops on the family, Pope Francis asked the cardinals to share their opinions with frankness, fidelity to church teaching and concern for the salvation of souls.

NEXT: Defend life: Economics without ethics are deadly, cardinal says