Racism and nationalism on the rise in Europe, Catholic leaders say 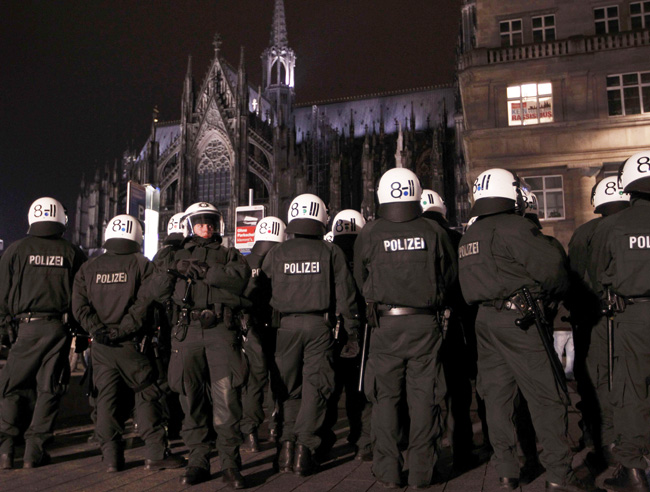 An anti-racism poster is displayed in a window of a building Jan. 21 as police stand guard in front of the cathedral in Cologne, Germany. (CNS photo/Ina Fassbender, Reuters)

OXFORD, England (CNS) — Catholic leaders condemned “racism and xenophobia” in Europe and urged religious communities to speak out against a growing “nationalism of exclusion” of the type that preceded both world wars.

The Conference of European Justice and Peace Commissions called it a “matter of serious concern” that “elections at regional, national and European level have shown a new rise of parties advocating the supremacy of narrow national interests over universal human values, international commitments and obligations.”

“The Christian vision of universal justice and peace does not allow for any kind of chauvinism — it calls for solidarity and respect for all,” the conference said in a Feb. 18 report.

The appeal was issued amid growing concern at the rise of nationalist and populist parties in Europe and a spate of violent attacks on religious and ethnic minority targets.

It said Catholic social teaching stressed the rights of “nations, cultures and minorities within existing nation-states” and believed “nothing can be said” against strong attachments to languages and places of birth.

However, it added that many parties were now seeking power by demanding “unilateral national measures, if necessary to the detriment of other peoples.”

“These slogans regularly find their way into the mainstream media and are thus amplified and orientate the general political agenda of a country in a nationalistic direction,” said the report, titled “The Nationalism of Exclusion.”

“Often racist or xenophobic, they inevitably bring to mind the belligerent and ultranationalist politics which preceded both world wars. By suggesting the nation, nationality and their underlying founding myths are an appropriate response to our contemporary challenges, those parties and their advocates refer to a paradigm of exclusion that will make matters worse.”

Far-right parties such as France’s National Front and Britain’s UK Independence Party made strong advances in May 2014 elections to the European Parliament, which represents the European Union’s combined population of 507 million.

In a Nov. 25 address to the Strasbourg-based Parliament, Pope Francis urged the continent to rediscover its “inalienable values” and warned against “the idea of a Europe which is fearful and self-absorbed.”

Some observers say poverty and unemployment, currently averaging 20 percent across the EU, have boosted support for nationalist and populist groups and intensified hostility to migrants, refugees and minority groups.

The conference report said that by “playing on the deepest fears of people, populist nationalist politicians seek to obtain power by offering simple solutions, ignoring the facts that solutions based on injustice or the marginalization of a part of a society can never lead to a peaceful and progressive community.”

Archbishop Jean-Claude Hollerich of Luxembourg, conference president, said the report would be submitted to policy-makers. He said the conference would provide national justice and peace commissions with a plan for assessing “the programs and methods of nationalist and xenophobic parties.”

The report said populist demands for the closure of Europe’s borders against migrants and refugees were “unrealistic and inhumane” at a time when the continent’s “rapidly aging societies” faced a worsening labor shortage.

It added that the hostility of nationalist parties towards the 28-country EU should be “recognized for what it is — a smokescreen,” and said lessons should be learned from Europe’s history about the dangers of “racist and xenophobic violence in word or deed.”

“From a deep love for our common values, we derive courage — courage to withstand incriminatory and false speech, to stand up in public against exaggerated misrepresentations,” the conference said.

“We ask European citizens, civil society organizations and churches to speak out against all expressions of nationalist rhetoric in private and public life, to deepen democracy, solidarity and respect for human dignity through education and example, and to value human dignity as an essential part of our common European heritage.”