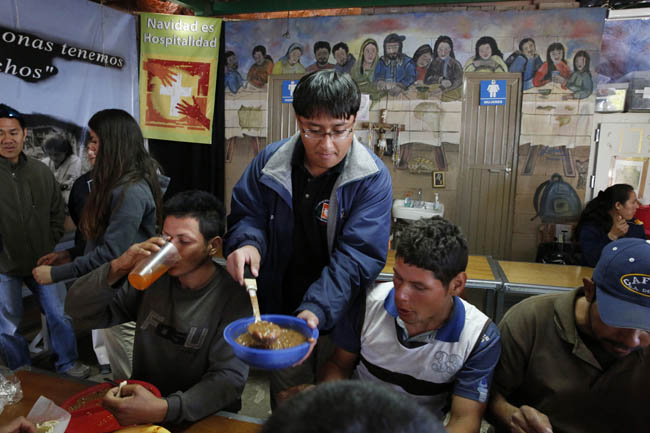 Gerardo Perez serves beans to deported migrants in 2014 at the "comedor," the kitchen and dining hall of the Aid Center for Deported Migrants in Nogales, Mexico. (CNS photo/Nancy Wiechec)

MEXICO CITY (CNS) — Bishops from Mexico’s southernmost dioceses issued a statement calling for Catholics to stop acting indifferently toward the difficulties faced by undocumented migrants, who continue abandoning Central America and taking dangerous trips through Mexico in their attempts at reaching the United States.

“Our voice will continue being one of evangelization, which asks for a change of attitude from everyone: moving from selfishness to solidarity; from seeking individual advantages to feeling brotherhood with the most needy,” said the statement, issued Jan. 30 after a meeting of Mexican and Central American bishops in Tapachula, on the Mexico-Guatemala border.

“Dioceses and parishes must promote an integral evangelization based on the recognition of the dignity of all persons (and) attending with special kindness to the weakest ones. They are the face of Christ,” continued the statement, signed Bishop Guillermo Ortiz Mondragon of Cuautitlan, president of the bishops’ migrant ministry, along with the bishops of Yucatan, Tabasco, Tapachula, Tehuantepec, Campeche and San Cristobal de Las Casas.

“Any migrant must see in our Catholic communities a church without borders, the mother of all, where no person feels excluded only for being from another country. For the Christian, foreigners don’t exist because our faith calls on us to recognize them as brothers and sisters.”

Migration was in the news during 2014 as children streamed out of Central America in search of safety and family reunification and arrived by the tens of thousands at the U.S. border. Migrants transit Mexico on their way north, though a crackdown by Mexican officials in southern states is making undocumented migrants take alternate routes, instead of stealing rides on northbound trains.

Keeping migrants from riding the rails has not diminished the dangers of the trip — which can include kidnap and extortion — or dissuaded migrants from trying to transit the country, said Catholics who work with undocumented Central Americans.

“We see that it has only dispersed migrants,” Bishop Oscar Campos Contreras of Tehuantepec said in comments published by the Reforma newspaper after the meeting in Tapachula. “The flow of migrants continues, no longer on ‘La Bestia'” — the freight train notorious for maiming migrants — “but now in search of other paths.”

Over the summer, the Mexican government proposed a “Southern Border Plan” in response to the child migrant crisis. It included plans to keep migrants off of trains, in part, to prevent migrant injuries. Critics, including Father Alejandro Solalinde, winner of the National Human Rights Award winner, say the plan exposes migrants more to risks such as extortion and kidnap as they try to avoid the authorities and take less-traveled roads.

The operators of Catholic-run migrant shelters say they see fewer Central Americans seeking assistance in southern Mexico but report receiving similar numbers as before in northern parts of the country.

At the Brothers on the Road shelter in Ciudad Ixtepec, 250 miles west of the Guatemala border, migrants no longer arrive on the train and often end up walking circuitous routes to avoid detection.

“Many arrive at the shelter dehydrated, with wounds on their feet and other injuries because they were victims of assaults,” Jessica Cardenas, the shelter’s human rights director, told the Oaxaca newspaper El Imparcial.

The shelter, founded by Father Solalinde, received between 800 and 1,000 guests per day during the first half of 2014, Cardenas said. That number has dropped to between 200 and 300 guests per day since August.

Migrants often abandon Central America for economic and, in recent years, security reasons as the murder rates in Guatemala, El Salvador and Honduras rank among the highest in the hemisphere.

“Migration … appears as one of the painful symptoms of the social and economic sickness that our Central American neighbors suffer from,” the bishops’ statement said. It is a “sickness aggravated more now by the presence of organized crime, which puts a price on the life of every human being.”

NEXT: Pope praises fathers who stay with their kids through everything