Fresh and faithful take on ‘Cinderella’ fits like a glass slipper 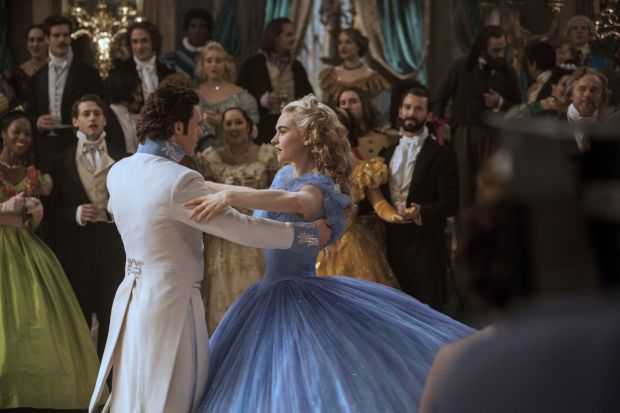 Lily James and Richard Madden star in a scene from the movie "Cinderella." (CNS photo/Disney Enterprises)

NEW YORK (CNS) — “Cinderella” (Disney) injects vibrant new life into a venerable fairy tale. The result is an exuberant live-action retelling of the oft-filmed fable, the most famous screen version of which is Disney’s classic 1950 animated feature.

Opting for fidelity and sincerity rather than a revisionist approach, director Kenneth Branagh sticks to the basic story, displaying genuine affection for its iconic characters. Familiar yet fresh, his delightful take, suitable for the entire family, nicely brings to the forefront dual lessons about compassion and forgiveness.

There’s a lot of death in the Cinderella story, but here that aspect of the tale is treated gently. Ella (Lily James) tends to her dying mother (Hayley Atwell), whose final request to her is, “Always have courage and be kind.” This becomes Ella’s life motto — and not a bad one at that. Her sunny nature and good will inspire all creatures, great (fellow humans) and small (white mice).

When her beloved father (Ben Chaplin) remarries, Ella’s patience is put to the test, but she never gives in to the dark side. The same, alas, cannot be said for Ella’s new stepmother, Lady Tremaine (Cate Blanchett), or her shrieking stepsisters, Drizella (Sophie McShera) and Anastasia (Holliday Grainger).

The ladies are ghastly in every respect, from their poor manners to their garish outfits. And anyone who calls her cat Lucifer, as Lady Tremaine does, is just about bound to be wicked.

The standard narrative unfolds: Father dies, and Ella is reduced to waiting on her obnoxious relations in the manner of a servant. Covered in ashes from cleaning the fireplace, she’s derisively dubbed “Cinderella.”

Riding her horse through the forest one day, Cinderella encounters Kit (Richard Madden), aka Prince Charming. They meet cute but confused, she unaware of his royal status, he not catching her name. Cinderella retreats, and the prince, his heart aflame, vows to find the enchanting maiden.

A royal ball is arranged, with an invitation to all eligible ladies in the kingdom, titled or not. Lady Tremaine forbids Cinderella to attend, tearing her dress to pieces.

Cinderella’s Fairy Godmother (Helena Bonham Carter), naturally, has other ideas. The transformation of pumpkin, mice, lizards and a goose into a golden coach, white horses, footmen and driver, respectively, is one of the highlights of the film.

The other standout is Cinderella’s shimmering blue dress. Not since Scarlett O’Hara made an outfit from old curtains in “Gone with the Wind” has a skirt stolen the show to such an extent, swishing and swirling across the dance floor as though possessing a mind of its own.

While there are a few twists in store, a happy ending is assured, and the final message won’t leave a dry eye in the house.

Preceding “Cinderella” is a short animated film, “Frozen Fever,” featuring characters from the blockbuster 2013 movie “Frozen.” It’s Princess Anna’s (voice of Kristen Bell) birthday, and her sister, Queen Elsa (voice of Idina Menzel), is planning a party — despite feeling unwell. Given Elsa’s frost-producing proclivities, as highlighted in the original, however, her sneezes bring predictably chilly consequences.

The Catholic News Service classification is A-I — general patronage. The Motion Picture Association of America rating is PG — parental guidance suggested. Some material may not be suitable for children.

NEXT: ‘Run All Night’ and watch for a tale of conversion