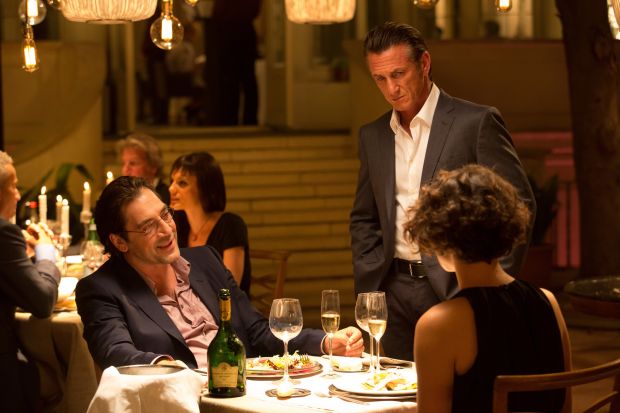 Javier Bardem, Sean Penn and Jasmine Trinca star in a scene from the movie "The Gunman." (CNS photo/Open Road Films)

NEW YORK (CNS) — The plodding thriller “The Gunman” (Open Road) leaves a trail of messy mayhem and misguided values as its action shuttles between Africa and Europe.

Consequently, mature moviegoers will need a thick skin to withstand its violent visuals as well as considerable discernment to strain out its flawed understanding of marriage.

There’s also a basic hurdle of believability for viewers to clear, given that Jim Terrier (Sean Penn), the firearm-toting character of the title, transforms himself in short order — at least as measured by elapsed running time — from paid assassin to peaceable aid worker. We’re tipped off to Jim’s potential for better things early on, though, by being shown his passion for his do-gooder girlfriend, Annie (Jasmine Trinca).

Jim’s real profession creates romantic complications when the time comes to eliminate a troublesome Congo cabinet minister. The official’s meddling has threatened the profits of the behind-the-scenes corporate types who pay Jim and his confederates to kill. So Jim’s boss, Cox (Mark Rylance), organizes a hit.

It’s up to Jim’s colleague Felix (Javier Bardem) to decide which member of their squad will be selected for the high-profile job, and it’s no accident that he settles on Jim. Given the headline-grabbing nature of the rub-out, the chosen gunman will have to go into prolonged hiding in its wake. And, since Felix is carrying a torch for Annie, having Jim out of the way in the murder’s aftermath will suit his romantic purposes perfectly.

Flash-forward the better part of a decade and Jim is back in Africa drilling wells for the poor when his laudable labor is interrupted by a near-fatal attempt at long-delayed retribution. Evading his would-be killers, Jim hightails it first to London, where he tracks down Cox, and then to Barcelona, where he reconnects not only with Felix but, in an all-too-cozy manner, with Annie, who’s now Felix’s wife.

The script for director Pierre Morel’s often-gory adaptation of Jean-Patrick Manchette’s novel “The Prone Gunman” — on which Penn collaborated with Don MacPherson and Pete Travis — implicitly justifies the adulterous resumption of Jim and Annie’s relationship.

Felix is an underhanded villain, Annie married him for all the wrong reasons, and we can tell just by watching Jim and Annie neck that they’re meant for each other. So it’s not really cheating; it’s the triumph of Cupid. Right.

As the plot description above hints, the screenplay also takes a fashionably anti-capitalist stance by suggesting that all the problems of the developing world result from the machinations of multinational conglomerates. If only the sometimes murky plot of “The Gunman” were as simplistic as its worldview, the work of keeping up with the proceedings might not seem so unrewarding.

The film contains strong, frequently bloody violence, a distorted view of marital fidelity, a semi-graphic scene of adultery, cohabitation, brief rear nudity in a nonsexual context, adult references, including to contraception, a couple of uses of profanity as well as pervasive rough and occasional crude language. The Catholic News Service classification is L — limited adult audience, films whose problematic content many adults would find troubling. The Motion Picture Association of America rating is R — restricted. Under 17 requires accompanying parent or adult guardian.

PREVIOUS: Deadly teens are still on the run in ‘The Divergent Series: Insurgent’

NEXT: Movie review: Do You Believe?