Vatican watcher sees ‘something extraordinary going on’ with Pope Francis 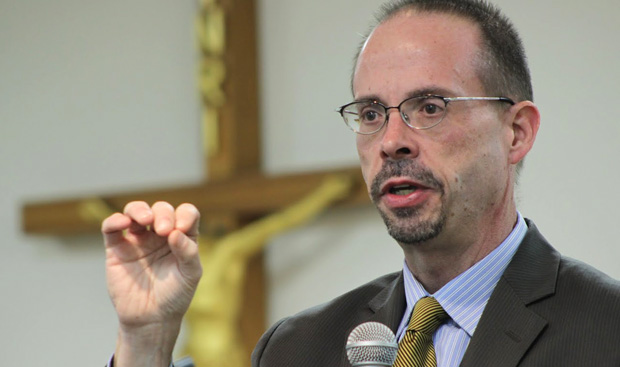 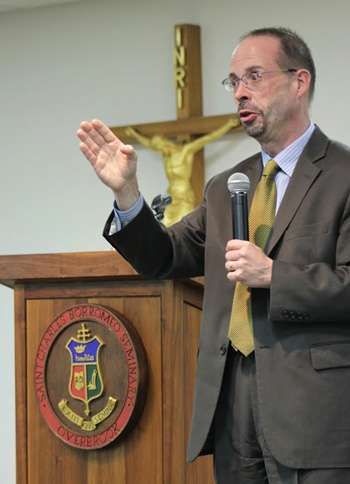 A journalist who has been covering the Vatican for more than 20 years has never seen anything like the effect Pope Francis is having on the world.

John Allen, a veteran Vatican watcher formerly with the National Catholic Reporter newspaper and now with Crux, a Catholic news website of the Boston Globe newspaper, points to two facts about the pope’s huge popularity.

At 19 million followers on the social media site Twitter, the pope is “the most popular spiritual leader on the planet,” Allen said. That’s more followers on Twitter than the next highest such leader, the Dalai Lama (10 million), but in the middle of the pack with basketball star LeBron James and pop singer Miley Cyrus, also at 19 million.

A more solid measure of popularity is a Pew Foundation study cited by Allen that showed an astronomical 80 percent approval rating among all United States citizens, and 90 percent among American Catholics.

Interestingly, the Pew poll showed the pope has a 94 percent approval by self-identified conservative Catholics and a lesser rating – 87 percent – from liberal Catholics.

That finding and his close reporting on Pope Francis leads Allen to conclude that the pope’s doctrine “is as robustly orthodox as his predecessors,” Allen said. “He’s not Che Guevara is a cassock.”

It was one of many observations on the pope’s “enormously powerful model of church communications” during Allen’s March 10 talk and brief Q&A that followed with the approximately 50 guests at St. Charles Borromeo Seminary, Wynnewood.

It was the second annual lecture of the Cardinal John Foley Chair of Social Communications and Homiletics at the seminary.

For all of Pope Francis’ gleaming global popularity exactly two years (March 13) since his election, people are responding to his three fundamental qualities, Allen believes: candor, spontaneity and compassion.

An example of the first two came on the same occasion when Pope Francis joined the Vatican press corps for an impromptu discussion on the papal flight to Rome from Rio de Janeiro at the end of the 2013 World Youth Day. The pope sat down and asked the reporters, “What have you got?”

For him every issue, no matter how sensitive, was fair game. But the reporters did not grasp this and for the first hour their “softball” questions danced around the tough issues. They only slowly realized that this session was “our first opportunity for unfiltered access that we had only dreamed of,” Allen said.

The hours-long discussion was their first glimpse of the pope’s “capacity to blow past diplomatic cant using indirection to get to the heart of the matter,” Allen said.

It was also the source of the pope’s now famous reply to a question about homosexual people: “A gay person who is seeking God, who is of good will — well, who am I to judge him?”

Allen believes the quote was misused by individuals and taken out of context by some in the media.

“The pope was trying to project a deep compassion even if a person’s lifestyle choices don’t comport with the Christian ideal,” Allen said, adding the pope “has the unique interior freedom to engage questions and answer them in a way that is quantitatively new” and an ability “to disarm people who have a critical filter to what the church teaches and stands for.”

Behind all the pope’s communication strategies lies an emphasis on mercy, which Allen called “the defining virtue of this pope.”

He relayed a story of how the pope showed compassion publicly to diffuse criticism of the church. In his recent trip to South Korea, Francis visited a church-run care center for the poor that has come under fire by critics for mismanagement and been called sign of hypocrisy.

But the pope exceeded his scheduled 30-minute visit by staying almost two hours visiting one by one with hundreds of the poorest Korean people at the facility.

“He changed the story line by being pastorally present to the most isolated people,” Allen said. “His compassion comes off as sincere. He has the ability to redirect the conversation of Catholicism.”

Allen believes the pope’s approach has been successful, but it is not without two risks. The first is confusion about where the church stands on issues. If the pope says something that is misinterpreted, such as when he said in an interview he “didn’t need to repeat” church teaching on the protection of unborn human life, he follows it with multiple concrete examples of that teaching in public statements and appearances.

The second risk for the pope’s style is “exacerbating division in the church,” Allen said. Last fall’s synod of bishops on the family in Rome displayed some of that division, including on how to respond pastorally to divorced and remarried Catholics.

The pope concluded the synod’s debates with a speech that “tried to bring the house back into unity,” Allen said. The pope’s challenge, he said, is to strike a balance between a “hostile rigidity and a false mercy,” avoiding both extremes.

Despite the risks and criticisms, Allen sees no evidence the pope will change his style.

“He believes he is a man on a mission,” Allen said. “He believes there is a miracle at the core of the pope he has become.”

As Cardinal Jorge Bergoglio, he rarely made public appearances, gave media interviews or even smiled in public, Allen said. But something changed. After his election as Pope Francis, he described “a mystical experience of God’s presence, a sense of interior freedom and peace that has never left him,” Allen said.

From that personal perspective and the broader picture Allen sees of the global church, “my gut tells me something extraordinary is going on,” he said, adding two years ago some church leaders he spoke with did not think efforts to evangelize “had a fighting chance.”

The much-touted “Francis effect” has at this point led more to a greater curiosity in the Catholic Church, more so than in actual church attendance, although half of the pastors in the Diocese of Rome have reported an increase in attendance, Allen said.

If there is an effect, “it doesn’t depend on Francis but on us,” and the pope’s method of Christian outreach and evangelization is a model for all Catholics to follow. “All of us are going to be called into communication on behalf of the church. We have to exude those three qualities (of Francis),” Allen said.

He added that Catholics in their conversations should drop the “prefabricated, boilerplate rhetoric and instead respond heart to heart with a twinkle in your eye.”

NEXT: Relief worker sees the tragedy, and gratitude, of Syrian refugees in Lebanon