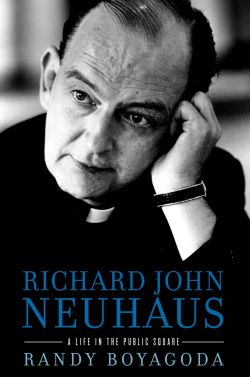 WASHINGTON (CNS) — Father Richard John Neuhaus was many things, among them “a theologian, an intellectual, an activist, an ecumenist, a writer,” said the author of a new biography of the late priest who hopes his book will be the definitive volume on his life.

The book follows the life of the churchman — affectionately known as “Pope Neuhaus” — from his upbringing as the son of a Lutheran pastor, to his ordination first as a Lutheran minister then as a Catholic priest and a long career of political activism, including an “array of efforts” to bring sanctity and cultural renewal to “every aspect of American life,” according to author Randy Boyagoda.

At a recent presentation in Washington, Boyagoda recounted the series of events that led him to write about Father Neuhaus. He also read several excerpts from the book, titled “‘Richard John Neuhaus: A Life in the Public Square.”

Boyagoda himself grew up in a Catholic home outside of Toronto, he said, where his mother “kissed her rosary beads and put them under her pillow every night.”

While attending graduate school in the United States, he met Father Neuhaus shortly after being published in the journal First Things, which the priest founded and headed as editor in chief.

When it came time to publish a second academic book, Boyagoda decided on Father Neuhaus as the subject, a figure he calls both “distinctive and often controversial.”

Richard John Neuhaus was born in the town of Pembroke, Ontario, in 1936, the seventh of eight children. “Little Dicky,” according to Boyagoda, experienced a childhood that was distinctively marked by two of his passions: “He had a deep love of God and a deep love of making trouble.”

Following a childhood and adolescence of prayer and pranks, eventually the “God-loving troublemaker” would attend Concordia Seminary and be ordained in the Lutheran Church. 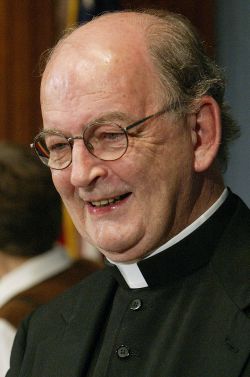 The late Father Richard John Neuhaus is pictured in this 2005 file photo. Author Randy Boyagoda hopes his new biography will be the definitive volume about the priest, whom he called “distinctive and often controversial.” (CNS photo/Bob Roller)

While at Concordia, one event from his practicum would stay with him and enflame the passion for social justice that would mark his pastoral and political career.

One summer morning in Detroit, the young seminarian went to see why the ushers of the church would gather on the church’s front steps five minutes before the service started. What Father Neuhaus saw were ushers paying black parishioners to find another place to worship, so that they would not attend services at the mostly white congregation, giving credence, Boyagoda said, to the Rev. Martin Luther King Jr.’s famous quote that the most segregated hour in America was 11 a.m. on Sunday.

Following that summer, Father Neuhaus wanted to continue working in urban ministry. He took an assignment at a poor congregation in Brooklyn, New York, which did not even have enough money to pay him, causing him to moonlight at a local hospital as a chaplain.

Father Neuhaus’ political activism began during the Vietnam War, when he saw that “there was no place for religious people to protest the war in Vietnam.” In response to this, Father Neuhaus organized a protest at his own church in Brooklyn, which ended with “the most heartfelt rendition of ‘America the Beautiful’ anyone there had ever heard, ” Boyagoda said.

Through the rest of his career and life, both of which ended with his death in 2009, Father Neuhaus continued to engage in public life through political activism, organizing and speaking, in addition to writing such books as “The Naked Public Square: Religion and Democracy in America” and “American Babylon: Notes of a Christian Exile.”

According to Boyagoda, Father Neuhaus also was “one of the greatest interpreters of Pope John Paul II in public life.”

A leading figure of the American left during the Sixties and Seventies — he founded what was then called Clergy and Laymen Concerned About Vietnam — Father Neuhaus’ “alignments changed as American life changed,” according to the biographer.

That eventually led to the priest’s involvement with such politically conservative organizations as the Moral Majority and even advising then-Texas Gov. George W. Bush on a list of campaign approaches that would appeal to Catholic voters.

In closing, Boyagoda read a section of the biography that discussed a 21-page letter Father Neuhaus wrote to a friend while he was working as a hospital chaplain in Brooklyn.

After witnessing the birth of a fatherless child, unwanted by its mother, Father Neuhaus was woeful and vexed at the kind of life he imagined the child would have. He was especially troubled, the letter said, because more than a third of the children brought into the world at the hospital were born into similar circumstances.

Nonetheless, Father Neuhaus was “not depressed, but filled with wonder” at the hope that still remained for the children he saw born in that poor part of the city through the love of God. More than anything else, the letter said, he wanted nothing more than to tell the newborn child, “You are not alone.”

Throughout his career, said Boyagoda, Father Neuhaus spoke out against a political culture “where you had more of a constitutional right to abort your unborn child than you did to quote the Bible at a public meeting.” Upon his death, he “expected to meet God as an American and be expected to give an account of how he had lived up to the prophet Isaiah’s hope and promise that ‘the word should not return void,'” the author said.

Boyagoda said that he wanted this work to serve as a fitting and “authoritative” retelling of a man who was “known by those around him as a theologian, an intellectual, an activist, an ecumenist, a writer, an editor, a cultural commentator, a political pundit, a political candidate, a policy expert, a religious journalist, a religious leader, a spiritual director, a spiritual father, a teacher, a pastor and a priest.”

NEXT: Book’s promised look at future under Francis fails to materialize