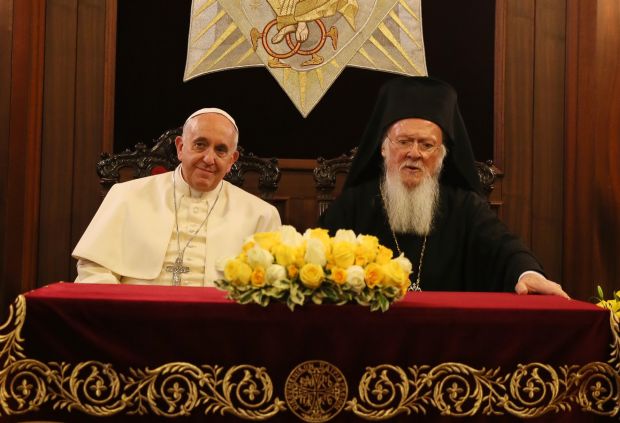 Pope Francis and Ecumenical Patriarch Bartholomew of Constantinople sit during signing of joint declaration at the patriarchal Church of St. George in Istanbul in this Nov. 30, 2014 file photo. (CNS photo/Grzegorz Galazka, pool)

VATICAN CITY (CNS) — Reconciliation between the Catholic and Orthodox churches is urgently needed, said Ecumenical Patriarch Bartholomew of Constantinople in an extensive interview with a prominent Jesuit journal.

Due to great suffering and injustice around the world, “today, perhaps even more than 50 years ago, there is a greater and more urgent need for reconciliation,” he told Jesuit Father Antonio Spadaro, editor of Civilta Cattolica.

In the interview, which was available online April 1, the patriarch suggested collaborating with Pope Francis in “common action” on social justice issues.

Pope Francis and Patriarch Bartholomew demonstrated deep mutual respect and during their meetings in Rome, Turkey and the Holy Land. Many remarked on the pope’s gesture of humility and rapprochement last November, when he bowed and asked for Patriarch Bartholomew’s blessing in the patriarchal cathedral in Istanbul. The patriarch responded by gently kissing the top of his head.

Patriarch Bartholomew told Father Spadaro that the world is marked by “unprecedented rapid changes” and people’s ability to “exercise more influence on their surroundings.”

“Never before have human beings been in a position to decide and determine the future of our community and planet,” he said. “We can literally choose and change the way we live in order to inform and influence the challenges that we face.”

However, despite the possibility for positive change, the greatest challenge at the moment is the reluctance of people to “recognize our own responsibility for the difficulties and divisions that plague our world” and to act to change them, he said.

He called faith “a powerful ally” to address social justice issues and he said religion is “arguably the most pervasive and powerful force on earth.”

The role of religion is to respond to the needs of the poor and to provide a “unique perspective” on racism, globalization, religious tolerance, the eradication of poverty and the fight against fundamentalism, he said.

On relations with the Catholic Church, the patriarch of Constantinople said the historic meeting in 1964 between Ecumenical Patriarch Athenagoras and Pope Paul VI “marked a new beginning for relations between Roman Catholicism and Orthodoxy.”

“Thankfully today the spirit of fraternal love and mutual respect has replaced the old polemic and suspicion,” he said. While full communion between the two churches has yet to be achieved, “nevertheless, we have learned to forgive one another for the mistakes and mistrust of the past; and we have taken significant steps toward rapprochement and reconciliation,” he added.

The patriarch responded to questions about primacy and collegiality, which are among the more prickly theological issues between the two churches. He confirmed that both issues are currently on the table in the official Catholic-Orthodox dialogue. He acknowledged they are “very central and at the same time critical” for Catholic-Orthodox relations, but difficult “to unpack” due to “prejudice and polemic on both sides.”

However, “the way church leaders conduct themselves” while these issues are being discerned “will have a significant impact on how authority is perceived in the church,” he continued.

As regards the papacy in this perspective, the patriarch said, “the way that the papal ministry is exercised in humility and compassion — instead of as an imposition over the rest of the episcopal college — will invariably define the manner in which it is a truthful reflection of our Lord’s crucified love, rather than in terms of worldly power.”

He said synodality requires a “protos” — a leader — “who has the charisma of ‘diakonia’ at the service of unity” and seeks the “consensus of everyone.” He said Pope Francis has “revealed his extraordinary leadership” in this regard.

Yet, the patriarch recognized that much work has yet to be done toward unity “both between our two churches, as well as within our own churches.”

“There is no doubt that the path will be long and difficult,” he said. “But as disciples of our Lord … we have no other alternative but to pursue this path of reconciliation and unity. Any other way would be a dishonorable betrayal of the Lord’s will and an unacceptable return to our estranged and regrettable past.”

In the meantime, there is much the Orthodox churches “can nonetheless do together with Pope Francis in order to respond to the vital needs of our world,” he said, suggesting service to the poor and addressing climate change.

The patriarch said next year’s Great Council of the Autocephalous Orthodox Churches will address Orthodox relations with other Christian churches and religions, as well as relations among Orthodox churches themselves.

NEXT: Pope to priests: Exhaustion is part of ministry