Say ‘Aloha’ to romantic comedy with dash of strategic defense 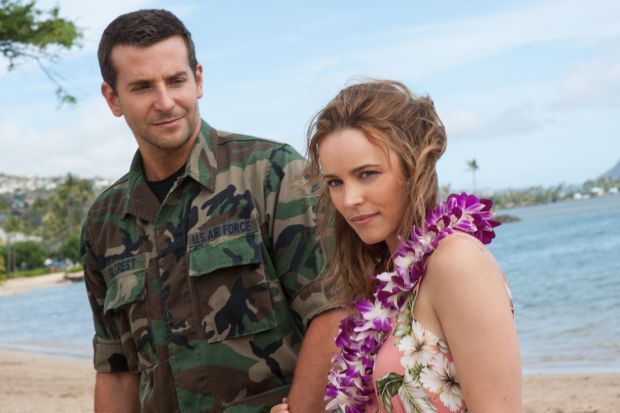 Bradley Cooper and Rachel McAdams star in a scene from the movie "Aloha." (CNS photo/Columbia Pictures)

NEW YORK (CNS) — Hawaii’s allure as a tropical paradise derives from its pristine beaches, fragrant flora, colorful mythology, and air of laid-back hospitality. But the islands are also defined by their history as one of America’s most strategic military outposts.

At the beginning of “Aloha” (Columbia), writer-director Cameron Crowe (“Almost Famous,” “Jerry Maguire”) references the uneasy coexistence of these two aspects of the 50th state using a montage in which images worthy of a tourism bureau ad alternate with footage of missiles and other martial assets being deployed.

What follows is a half-baked yet charming romantic comedy that cautions against privatizing the nation’s defenses, weaponizing space and trampling on the rights of indigenous peoples. As a romantic comedy should, “Aloha” also celebrates the virtues of opening oneself up to others in pursuit of truly meaningful relationships.

This mixture — one part screwball comedy, one part earnest tale of redemption through love, and one part satire about the corrupting influence of money within the military-industrial complex — is highly unstable. Yet despite its flimsy plot structure and conflicting tones, “Aloha” is elevated by its poignant idealism and terrific cast.

Bradley Cooper stars as Brian Gilcrest, a former serviceman turned military contractor with a checkered personal and professional past. After being seriously injured while working in Afghanistan, he returns to the Aloha State where he was once stationed and angles to get his career back on track.

His ex-girlfriend, Tracy Woodside (Rachel McAdams), lives on Honolulu’s Joint Base Pearl Harbor-Hickam with her husband, a C-17 pilot, and their two children. The marriage is wobbly and, evidently, Tracy still pines for Brian 13 years after their breakup.

Emma Stone plays Brian’s eager Air Force liaison, Capt. Allison Ng. After they fall in love, he questions the motives of his boss, billionaire industrialist Carson Welch (Bill Murray). Welch, who is funding a mysterious space project for the U.S. government, has instructed Brian to convince the leader of Hawaii’s independence movement, Dennis “Bumpy” Kanahele (playing himself; he’s a real-life descendant of King Kamehameha) to bless the construction of a facility to be built on land native Hawaiians consider sacred.

With his trademark use of rock ‘n’ roll music and a talent for penning witty dialogue, Crowe aims for a loose, improvisational feel — aided, unfortunately, by some dizzying handheld cinematography. This off-the-cuff vibe cannot hide the fact he is firmly in control and that the movie has a manufactured quality.

Happily, Crowe never loses sight of something fundamental about cinema, namely, the magic that occurs when performers establish palpable connections with one another and, consequently, with the audience. “Aloha” is a reminder that the primary draw of movies is nonverbal. Language, plot and ideas are secondary means of expression; looks, moods and feelings come first.

There’s abundant chemistry between Cooper and his two winsome female co-stars. Stone’s performance is more of a revelation. Simultaneously luminous and awkward, she exhibits a real flair for madcap comedy. Brian also forms a sensitive bond with a third female character, Tracy’s 13-year-old daughter, Grace (Danielle Rose Russell). And the theme concerning the superfluity of verbal communication is made explicit in a hilarious scene between Brian and Tracy’s laconic husband, Woody (John Krasinski).

This is not to suggest movies boil down to star power and actors’ charisma, or that a successful romantic comedy requires beautiful people ogling one another. There must be something substantial beneath the surface to trigger sparks. In effect, “Aloha” argues that while the connection between man and nature may be sacred, as the native Hawaiians believe, a loving relationship between two individuals is more spiritual and more satisfying.

The film contains an instance of off-camera nonmarital relations between a man and a woman, one use of rough language, several crude phrases, and some sexual innuendo. The Catholic News Service classification is A-II – adults and adolescents. The Motion Picture Association of America rating is PG-13 – parents strongly cautioned. Some material may be inappropriate for children under 13.

NEXT: Authors offer cultural background on church conflict with Galileo