Ladies go on the lam in ‘Hot Pursuit’ of laughs 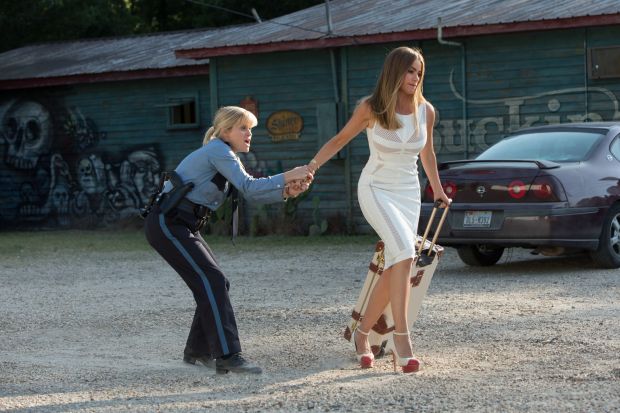 NEW YORK (CNS) — Reese Witherspoon and Sofia Vergara hit the road in the brittle comedy “Hot Pursuit” (Warner Bros.). The film’s title notwithstanding, the results of their journey are distinctly lukewarm.

Witherspoon plays a high-strung Texas copper named Cooper. A second-generation police officer whose father was a legendary lawman, Cooper has been relegated to evidence-room duty since making a disastrous blunder that has become fabled on the force for all the wrong reasons.

She gets another shot at frontline police work, however, when she’s assigned to protect Daniella Riva (Vergara), the volatile wife of a Colombian drug runner-turned-government-witness. Through no fault of Cooper’s, Daniella’s hubby is gunned down in short order in what turns out to be a plot involving corrupt cops — most prominently Cooper’s colleagues, detectives Dixon (Michael Mosley) and Hauser (Matthew Del Negro).

That leaves Cooper and Daniella with no choice but to go on the run together. As director Anne Fletcher puts the ill-suited duo through their predictable road-movie paces, the results are mediocre.

A gun-toting backwoodsman type, for instance, is shown to be easily distracted from following up on Cooper’s attempt to commandeer his truck when Daniella has the inspired idea of pretending that she and Cooper are lovers. They grope; he gapes; we’re meant to giggle.

Things return to an even heterosexual keel with the appearance of Randy (Robert Kazinsky), a hunky fugitive who seems destined to put overwrought Cooper back in touch with her feminine side. But not before she accidentally walks in on him in the altogether. Like any normal adult, Cooper deals smoothly with this awkward situation by repeatedly shouting the P-word at the top of her lungs.

If there’s a message behind all of this it seems to be that, however impractical their choice of footwear may be for going on the lam, the widows of South American narcotics importers are people, too. Perhaps “Sesame Street” should devote an episode to that important life lesson.

The film contains fleeting violence and gore, brief partial nudity, a drug theme, a mildly irreverent joke, some earthy humor including a scene of feigned homosexuality, at least one use each of profanity and rough language and occasional crude and crass terms. The Catholic News Service classification is A-III — adults. The Motion Picture Association of America rating is PG-13 — parents strongly cautioned. Some material may be inappropriate for children under 13.