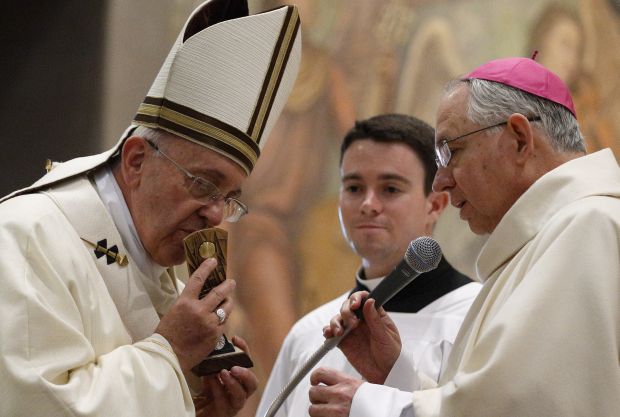 Pope Francis kisses a relic of Blessed Junipero Serra presented by Archbishop Jose H. Gomez of Los Angeles at the conclusion of Mass celebrated at the Pontifical North American College in Rome May 2. It was the first papal visit to the U.S. seminary since 1980. The pope said that while some people seem to relish the idea of listing Blessed Serra's defects, he wondered how many would have the courage he had to leave everything and preach the Gospel. (CNS photo/Paul Haring)

ROME (CNS) — Defining Blessed Junipero Serra as a “working-class missionary,” Los Angeles Archbishop Jose H. Gomez said the 18th-century Franciscan deserves to be made a saint and to have his record as a defender of native peoples made known.

Pope Francis’ announcement that he will canonize Blessed Serra in September “has opened old wounds and revived bitter memories about the treatment of Native Americans during the colonial and missionary period of America’s history,” the archbishop said.

Speaking May 2 at Rome’s Pontifical North American College, Archbishop Gomez said the legacy of Blessed Serra, who founded nine California missions, has been “distorted” by “anti-Spanish and anti-Catholic propaganda.”

“Sometimes it seems like scholars and activists have made Father Serra a symbol for everything they believe was wrong with the mission era,” he said, and it prevents people from appreciating “America’s religious beginnings.”

“It is clear that Pope Francis — the first pope from the New World — understands the Christian roots of the Americas and the continent’s importance for the church’s mission in the 21st century,” the archbishop said at the symposium organized by the U.S. seminary in Rome, the Pontifical Commission for Latin America, the Archdiocese of Los Angeles and the Knights of Columbus.

Archbishop Gomez said Blessed Serra “will be the first American saint to be canonized on American soil. And of course, he is being canonized by the first Hispanic pope,” the first pope to “speak the Spanish language as his native tongue, and a pope who himself is an immigrant’s son.”

At a time when the people of United States are “caught up in a divisive political and cultural debate over immigration and the future of its historic identity as a multicultural nation of immigrants,” he said, the canonization is a “prophetic response to the sign of the times.” 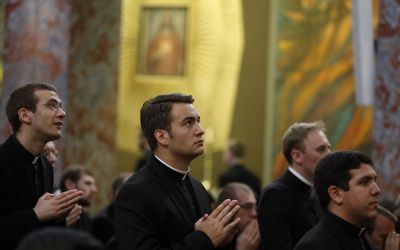 “I believe Father Serra would have us working to build an America that promotes the encounter of cultures and seeks to protect the sanctity and dignity of the human person,” the archbishop said.

By canonizing Blessed Serra in Washington, the nation’s capital, Archbishop Gomez said, Pope Francis will be sending a message, “a call for America to return to its deep religious and intercultural roots — as a nation born from the universal mission of the Catholic Church and the encounter of the Gospel with the first nations, cultures and peoples found in this land.”

The canonization also should be an encouragement for every Catholic to imitate Father Serra in boldly, but respectfully share their faith. “Father Serra believed — with all his heart — that the Gospel was true. And out of love, he was willing to give up everything — family and home, security and fortune, even his very life — to bring the truth of this salvation to people living on the other side of the world, people he did not know, people who did not share his language or customs.”

Despite what people may have read in the newspapers recently, the archbishop said, Blessed Serra’s own writings and documents recounting his activities in California in the late 1700s prove his efforts to defend the native peoples, particularly against the cruelty of the Spanish soldiers and governors.

Carl A. Anderson, supreme knight of the Knights of Columbus, also spoke at the symposium. Afterward, he told Catholic News Service, “It’s very important that we set the record straight about Junipero Serra because he is a model of Catholic missionary activity in North America.”

As U.S. Catholics discuss their identity and their future, he said, they need to understand their past, which includes “so many great missionaries — religious men, religious women — who built so many of the Catholic institutions of our country. Junipero Serra is really at the head of that list.”

Before Mary appeared to St. Juan Diego in Mexico in 1531, Anderson told CNS, “the missionary activity in the New World just did not get off the ground. But with her apparition, things changed dramatically because there on the tilma (St. Juan Diego’s cloak) is her image as a native person.”

The apparition, he said, “brought a respect for native people and native culture,” and Blessed Serra’s missionary activity reflected that. He understood that “evangelization isn’t domination, it’s not substitution of one culture for another culture, but it is recognizing the dignity and value of every culture and calling it to the Gospel.”

As Catholics take seriously their own missionary obligation, it is important to set the record straight about Blessed Serra and to imitate him, Anderson said.

“Pope Francis understands this better than almost anyone else because coming from Latin America he understands this great tradition, he understands how history has treated it sometimes very unfairly and he’s trying to preserve the record because what is past is prologue in terms of our identity,” he said.

“Our Lady of Guadalupe comes to unify, she comes to promote respect for minorities, she comes to build a new world, bringing people together, not dominating anyone,” he said. “The Holy Father understands that if we are going to evangelize in a time of globalization we must have an inculturated evangelization that respects diversity, different people, different cultures.”