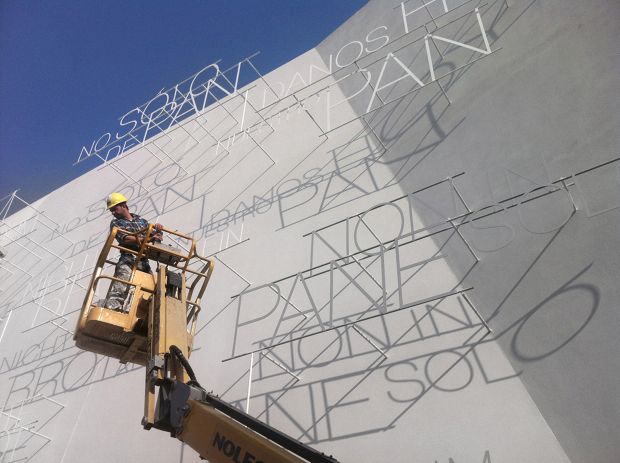 A construction worker puts the final touches onf the Holy See's 747-square-foot Pavilion at the Milan Expo 2015. The expo brings together more than 140 nations with pavilions and exhibits connected to the theme, "Feeding the Planet, Energy for Life." (CNS photo/courtesy Holy See Pavilion Press Office)

VATICAN CITY (CNS) — People need to stop destroying the planet and instead find ways to safeguard it and share its resources, particularly to feed the hungry, Pope Francis told officials from around the world.

In a live video address to the opening ceremony of Expo 2015 in Milan, the pope urged fair-goers and organizers to show real concern for the poor and to undertake concrete efforts to promote solidarity. Otherwise, he said, the world’s fair could be part of the “paradox of abundance” that St. John Paul II denounced when he noted how a small percentage of the world’s people had much more than they needed to live while so many people are starving.

Expo 2015 opened May 1, bringing together more than 140 nations with pavilions and exhibits connected to the theme, “Feeding the Planet, Energy for Life.” Running through Oct. 31, the exhibits — including a Vatican pavilion — focus on guaranteeing healthy, safe and sufficient food for everyone, while respecting the planet.

Pope Francis said that to ensure the motto “does not remain just a theme,” people attending Expo 2015 should make a real effort to keep in mind “the faces of the men and women who are hungry and who become sick or even die because of poor and bad nutrition.”

Introducing himself as “the bishop of Rome,” Pope Francis said he wanted to be a “spokesman for all these brothers and sisters of ours — Christians and non-Christians — whom God loves as sons and daughters.”

A world’s fair devoted to food, he said, is an appropriate occasion for “globalizing solidarity. Let’s try not to waste it, but take full advantage of it.”

Pope Francis expressed his hope that the exhibits would help people undergo “a change of mentality and stop thinking that our daily actions — whatever our position of responsibility — have no impact on the lives of those near or far who suffer from hunger.”

The pope prayed that God would give wisdom and courage to farmers and researchers and that all those involved in the production, distribution and sale of foodstuffs would feel called to “a great solidarity project: that of feeding the planet while respecting every man and woman who lives there and respecting the environment.”

“This is the great challenge to which God is calling humanity in the 21st century: To finally stop abusing the garden God has entrusted to us so that all may eat its fruits,” he said.

Pope Francis ended his message praying that no one would be lacking their daily bread and the dignity of a job that would allow them bring it home to their families.

PREVIOUS: When it comes to scheduling, pope says he’s definitely not infallible