When it comes to scheduling, pope says he’s definitely not infallible 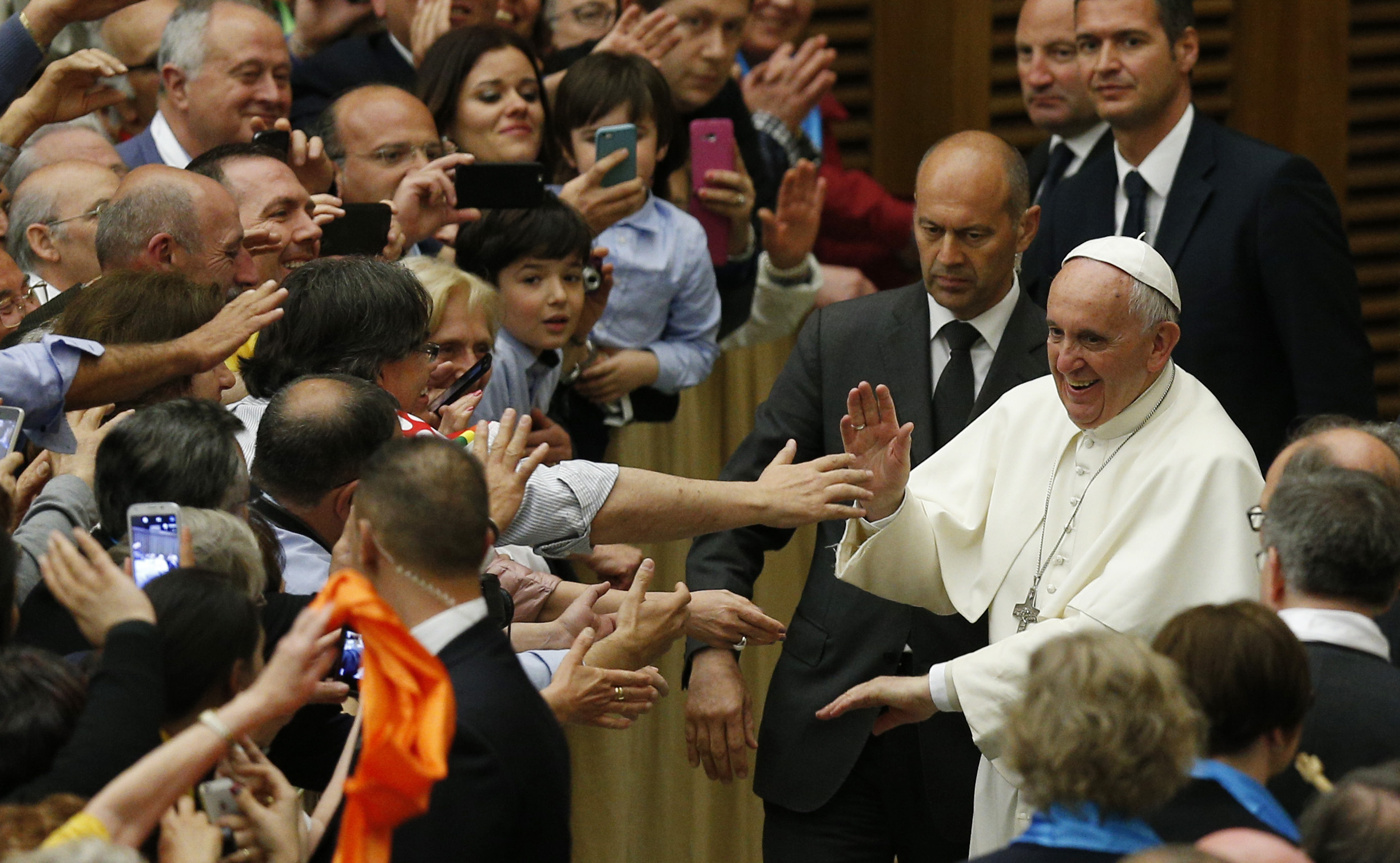 Pope Francis greets people during an audience with members of the Cursillo movement in Paul VI audience hall at the Vatican April 30. (CNS photo/Paul Haring)

VATICAN CITY (CNS) — Being infallible when formally defining a doctrine does not mean a pope doesn’t make mistakes at other times, Pope Francis said, admitting he caused confusion for about 5,000 members of the Cursillos in Christianity movement.

Holding a European-wide gathering in Rome, Cursillo members were scheduled to meet Pope Francis May 1, but instead he had them join him at the Vatican the evening of April 30.

“I must apologize,” the pope said. “You had to move many things around, creating difficulties, arranging transportation. Truly, I’m sorry.”

Interrupted frequently with applause, the pope continued his apology, saying, “You know the pope is infallible when he makes dogmatic definitions — something that rarely happens. But even the pope has defects and infallibility has nothing to do with his personal defects.”

Pope Francis listed his defects as being “a bit disorganized and also undisciplined.”

Spending more than an hour with Cursillo members in the Vatican audience hall, the pope thanked them “for all you do in the church, which is so beautiful; helping people encounter Jesus, helping them understand that living in the grace of God is beautiful.”

Through friendship, three-day retreats and small group meetings, he said, the Cursillo movement helps people discover that friendship with Christ is the answer to their heart’s longing for love and for truth.

“One important thing about your movement: you have not engaged in proselytism,” in shouting matches or forcing fliers into people’s hands, but instead offer friendship, kindness and a Christian witness, he said. “This is a virtue. The church does not grow through proselytism, but through witness as Pope Benedict (XVI) told us.”

“When you realize that God has been so good, so tender, so merciful — this has to come out, this has to be shared with others,” the pope said.

Pope Francis shared with the Cursillo members an experience from his days as archbishop of Buenos Aires. He said he knew a good woman who was “atheist — not agnostic, but atheist,” but one of her daughters “encountered Jesus Christ or, rather, she was found by Jesus” and became Catholic.

When the woman was well over 80 and was dying, her Catholic daughter was sitting with her. She asked her daughter what she experienced when she prayed. “They began a conversation, light and calm,” the pope said.

The mother, he said, told her daughter she would have liked to experience God’s love and the happiness of faith, but it was too late. “It’s never too late, Mom. Do you want me to baptize you?” the daughter said.

Pope Francis said the mother responded yes and the daughter, who did not want to frighten her mother by calling a priest, baptized her mother. The woman went into a coma and died the next day.

The daughter “told me what she had done and was afraid she may have done something wrong. ‘No, you did well. You made sure your mother would be in heaven,'” the pope said he told her. The daughter never tried to proselytize her mother, but patiently lived her faith and shared it with respect, he said.

Pope Francis encouraged members of the movement to strengthen their faith and witness through regular attendance at Mass and frequent reception of the sacrament of reconciliation.

“Every time we return to ask forgiveness, the Lord forgives us,” the pope said. “He knows we are weak, that we are sinners. We have a degree in sinning — he knows this and still he always receives us with love.”

Usually, he says he will not embarrass people by asking for a show of hands. But with the Cursillo movement, he said, “Let’s be brave. Raise your hand if you cannot do it.”

The vast majority of the 5,000 people in the hall raised their hands. “Look at that!” the pope said. “There’s work to be done. … This is your homework. Learn them to put them into practice.”

The corporal works are: feeding the hungry, sheltering the homeless, clothing the naked, visiting the sick, visiting the imprisoned, giving drink to the thirsty and burying the dead. The spiritual works are: converting sinners, instructing the ignorant, advising the doubtful, comforting the sorrowful, bearing wrongs patiently, forgiving injuries and praying for the living and dead.

PREVIOUS: Catholics must be active in politics, no matter how ‘dirty,’ pope says

NEXT: Protect the earth, feed the hungry, pope says at Expo 2015 opening