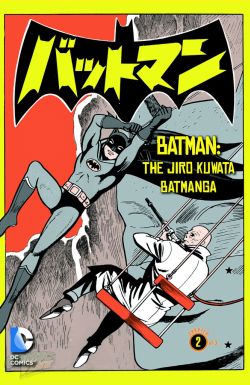 NEW YORK (CNS) — Before the despairing tone of the film “The Dark Knight Rises,” before the violent video game “Batman: Arkham Asylum,” before the shadowy and filthy world of modern Gotham City, there was a time when Batman was fun.

Batman creator Bob Kane’s stories included gothic and nocturnal elements from the start, of course. But the emphasis was mostly on the more lighthearted ingredients of the narrative: acrobatic athleticism, cool gadgets, jokes — and the sheer enjoyment of catching the bad guys. Along with black, gray and dark blue, red, yellow and white featured prominently in Kane’s palette.

In the 1960s, Japanese artist Jiro Kuwata also captured this upbeat side of Batman. Born in 1935, Kuwata was a pioneer of the Japanese manga style of comic book art. In light of the popularity of the campy Adam West-Burt Ward “Batman” TV series, which premiered on ABC in 1966, Kuwata was asked to do a series of Caped Crusader comics designed for Asian audiences.

The resulting strips were rediscovered several years ago, and have recently been reissued by DC Comics as “Batman: The Jiro Kuwata Batmanga Volume 1.”

In keeping with the style he helped to establish, Kuwata’s art is kinetic and exciting. He conveys speed and motion brilliantly, using odd angles and unconventional panel structure. Most of the comics are in black and white. But this gives them a timeless quality that’s often missing from their more colorful modern counterparts.

As for Kuwata’s depiction of violence, it’s graceful and restrained, not gratuitous. There’s no hint of gore or sadism on display. His work is at once fantastical in its avoidance of real bloodshed and broken bones and realistic in that it shows the genuine — and welcome — limits of unarmed human combat.

Kuwata’s Batman is, accordingly, morally acceptable for almost all readers. One of his villains, however, does wear a skeleton mask that might upset very young children.

By the same token, Kuwata’s Bruce Wayne is not a melancholy vigilante, but a fun-loving millionaire. Thus, rather than aggressively powering an urban assault vehicle through the streets of Gotham, he elegantly slides down a drainpipe instead.

As Kuwata’s approach reminds us, before computer-generated imagery and high-tech gadgets, superheroes may have been awesome, yet they weren’t all that different from ordinary people. They were generally portrayed with a celebratory focus on the human form in action.

Superman was muscular, but not freakish. Wonder Woman was less like an Amazon and more reminiscent of your next-door neighbor. In the same vein, Batman — a self-trained hero with no special powers other than will and determination — didn’t even use a gun.

Published decades before “The Dark Knight Returns,” Frank Miller’s massively influential 1986 graphic novel that turned Batman into a troubled and brooding figure, Kuwata’s work offers action leavened with humor and even a sense of the absurd.

Take, for example, a three-issue story chronicling Batman’s duel with the Human Ball, a villain capable of curling himself up and ricocheting around the city. Kuwata’s art is positively joyful as he shows the Human Ball engaging in slapstick antics.

Kuwata’s work is also refreshingly free of the kind of overblown story lines that feature power rings, magic boxes or cosmic amulets — and in which the future of the universe itself hangs in the balance. His characteristic modesty and playfulness return us to Batman’s roots. Before he was anything else, after all, Bruce Wayne’s alter ego was simply a detective.

The comics contain some stylized violence and potentially frightening imagery. The Catholic News Service classification is A-II — adults and adolescents. Not otherwise rated.