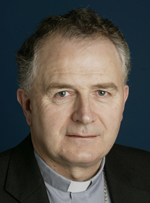 DUBLIN (CNS) — An Irish bishop urged his colleagues to establish a commission to discuss the possibility of ordaining married men.

The proposal stemmed from a 10-month listening process that Bishop O’Reilly led in the Kilmore Diocese, which led to a diocesan assembly and a new diocesan pastoral plan to tackle challenges facing the Catholic Church, including the declining number of priests.

Bishop O’Reilly told The Irish Catholic newspaper he plans to ask that the idea of the new commission be discussed at the next meeting of the bishops’ conference in October and “take it from there.”

“I think the other bishops would be open to the idea of a discussion and we are reaching a situation where we have to look at all the options possible,” he said.

Bishop O’Reilly told the newspaper that his proposal came in response to Pope Francis.

“Pope Francis has encouraged individual bishops and bishops’ conferences to be creative in looking at ways to do ministry in the future, so I think we have to consider all options,” he said.

The proposed commission would be similar to one in Brazil under the leadership of Cardinal Claudio Hummes, former prefect of the Congregation for the Clergy and retired archbishop of Sao Paulo, and Bishop Erwin Krautler of Xingu to study the possibility of ordaining married men in response to the shortage of priests.

Mandatory celibacy for priests in the Latin rite of the Catholic Church is a matter of law and tradition, not doctrine or dogma. Church authorities have at times given permission for married clerics of other Christian traditions who become Catholic to be ordained as priests.

Currently, the Catholic Church permits only men to be ordained as deacons. Permanent deacons can preach and preside at baptisms, funerals and weddings, but may not celebrate Mass or hear confessions.

Some historians say women deacons existed as a special category in the early history of the church. However, a 2002 study by the International Theological Commission concluded that the role of female deacons in the early church cannot be considered equivalent to that of ordained male deacons.

It also concluded that the permanent diaconate belongs to the sacrament of orders, which the church believes is limited to men alone.

NEXT: Pope pushes Putin to work for peace in eastern Ukraine