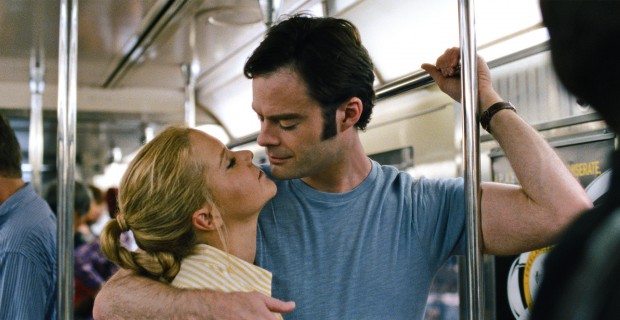 Amy Schumer and Bill Hader star in a scene from the movie "Trainwreck." The Catholic News Service classification is O -- morally offensive. The Motion Picture Association of America rating is R -- restricted. Under 17 requires accompanying parent or adult guardian.(CNS photo/Universal)

NEW YORK (CNS) — The self-deprecation in the title of this raunchy romantic comedy, a vehicle for stand-up comedienne Amy Schumer, is warranted.

Schumer, who plays the lead and wrote the screenplay for “Trainwreck” (Universal), has seen her star rise over the past few years thanks to her Comedy Central series “Inside Amy Schumer” and her propensity to combine X-rated humor with a satirical outlook, often about gender issues.

Underlying much of her material is the notion that women have as much right to be vulgar as men. And she’s not afraid to mock herself if she thinks it will help skewer sexism and hypocrisy within the entertainment industry or society-at-large.

Though she’s probably right about there being a double standard regarding what men and women can say or do without being subject to censure, her fondness for obscenity and self-debasement renders her material a dubious form of empowerment, feminist or otherwise. Schumer may be groundbreaking, but the ground she’s staking out is fallow at best.

She plays Amy, a sexually promiscuous New Yorker who has a strict rule about never spending the night after an encounter. Despite having a devoted if dimwitted boyfriend — the muscle-bound Steven (played by wrestling star John Cena) — she tests this rule routinely. A gauge of her wantonness: the role of “One-Night Stand Guy” appears four times in the movie’s credits.

Also a heavy drinker and inveterate marijuana smoker, Amy writes for a sleazy men’s magazine called S’Nuff. One day, her unscrupulous editor, Dianna (Tilda Swinton), tells her to profile an orthopedic surgeon who treats elite pro athletes such as the NBA’s LeBron James and Amar’e Stoudemire (who appear as themselves and get a surprisingly large amount of screen time). Amy hates sports, which is why Dianna, seeking a controversial angle, gave her the assignment.

Initially, Amy claims the nerdy bone doctor Aaron (Bill Hader) is not her type, a clue she likes him given she’s been the opposite of discriminating heretofore. Sure enough, they fall for one another. As commitment-phobic as they come, Amy is freaked-out by her feelings for Aaron — and by his reciprocation. Will true romance blossom?

A subplot concerns Amy and her younger sister, a suburban mom and housewife, deciding to put their father Gordon (Colin Quinn), who has multiple sclerosis, into an assisted living facility. The movie’s first scene is a flashback to Gordon telling his two young daughters why he and their mother are divorcing — “Monogamy isn’t realistic.” In Amy’s case, the apple didn’t fall far from the tree and now Gordon, an ornery rogue and bigot, urges her to remain single and not settle down with Aaron.

Somewhat surprisingly, the story follows a traditional trajectory, meaning no lives are actually wrecked as Amy endeavors to change her wild ways, albeit reluctantly and unapologetically. When you consider Judd Apatow (“Knocked Up”, “The 40-Year-Old Virgin”) is at the wheel, directing for the fifth time — the first without having written the screenplay — this adherence to romantic-comedy convention makes sense.

A prolific exponent of blue comedy on both the big and small screens, Apatow usually tries to dilute the smut with sentimentality. In this instance, however, it simply can’t be done and the happy ending is implausible, though not unwelcome.

“Trainwreck” is not well paced or structured. Apatow’s improvisational style of filmmaking makes for a relaxed, naturalistic atmosphere, which suits Schumer’s matter-of-fact delivery. But he allows the narrative momentum to flag and the movie feels way too long. It doesn’t help that the clown in “Saturday Night Live” alum Hader is kept under wraps or that a nonactor like James, who plays Aaron’s best friend, has so many lines.

Aside from being offensive and unfunny, a crude quip about Mother Theresa suggests Schumer’s primary aim is to shock and appear edgy. As the novelty of her persona and her tweaking of the romantic comedy formula wear thin, she’s as exposed as a one-trick pony.

NEXT: Catholics can benefit from Protestant Scripture scholar’s book