Want to get away from it all? Start by running from ‘Vacation’ 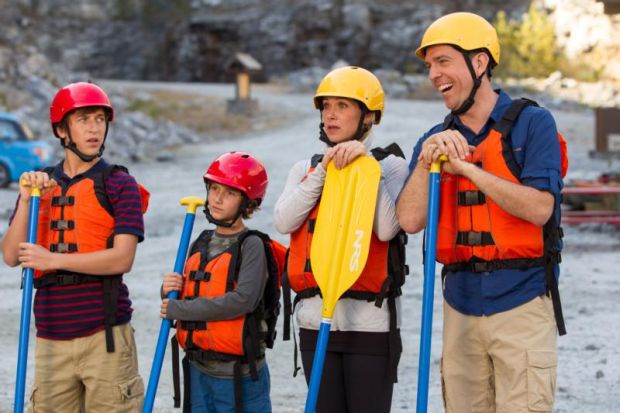 NEW YORK (CNS) — The dog days of summer may inspire the urge to get away from it all. Wise moviegoers, however, will not seek their relief in “Vacation” (Warner Bros.), a dog of a comedy that happily rolls around in all manner of muck.

This wretched revival of the franchise that began with 1983’s “National Lampoon’s Vacation” revolves around a new generation of the same hapless family — the Chicago-based Griswolds — featured in the original. The destination of their sultry season get-away also remains the same: a California amusement park, and Disneyland stand-in, known as Walley World.

The Griswolds embark on their road trip thither after bumbling patriarch Rusty (Ed Helms) — the teen son in the Reagan-era films — learns that his wife, Debbie (Christina Applegate), and their quarrelsome brace of boys, James (Skyler Gisondo) and Kevin (Steele Stebbins), are bored with the clan’s annual outing to a cabin in the Wisconsin woods. Rusty decides a weeklong ride to the Left Coast, by contrast, will be just the thing to shake up their routine and boost togetherness.

Needless to say, the travels that follow are beset by a variety of disasters. Yet the real calamity befalls viewers as they find themselves dragged along on a forced march through a landscape of tastelessness unrelieved by laughs.

Co-writers and -directors Jonathan Goldstein and John Francis Daley try to disguise their steamy material by cloaking it in family values. Thus, not only do we witness Rusty’s fatherly concern — which eventually morphs into exasperation –but also various scenes that demonstrate his and Debbie’s shared commitment to maintaining the vibrancy of their marriage.

The challenges to their union are typified by Debbie’s attraction to — and Rusty’s jealousy of — their hunky brother-in-law, Stone (Chris Hemsworth). But a stopover at Stone’s Texas home reveals, so to speak, the picture’s real agenda as their host pays Rusty and Debbie an enthusiastically exhibitionist bedtime visit, his tight underwear and contrived poses leaving nothing even to the sleepiest imagination.

Add to this interlude of too much information an inadvertent swim in a cesspool, the numerous obscenities the script puts into preteen Kevin’s mouth as well as ill-advised jokes about AIDS and pedophilia, and pretty soon you’ll be wishing you weren’t here.

NEXT: Sure, the mission is impossible, but it’s still fun