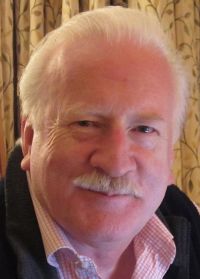 Music written by Paul Inwood, a British composer whose work is a staple of many parish liturgies across North America, was chosen as the Year of Mercy hymn. He is pictured in an undated photo. (CNS photo/courtesy Paul Inwood)

VATICAN CITY (CNS) — Paul Inwood and 89 other composers around the world had two months to submit their compositions of the music for the official hymn of Year of Mercy.

Inwood, a British composer whose work is a staple of many parish liturgies across North America, said he learned in June that his music was chosen and that the Sistine Chapel Choir was about to record it. The only problem was, they wanted a little extra musical flair.

“I spent the next 24 hours writing a brass prelude and interludes and a choral coda” for the ending, he said Aug. 6 in a telephone interview with Catholic News Service.

The hymn’s title and refrain, “Misericordes sicut Pater,” is the official Latin theme of the Year of Mercy and translates to “Merciful Like the Father.”

The Pontifical Council for Promoting New Evangelization, which is charged with coordinating the Year of Mercy events, released the hymn Aug. 6, posting the text and music on its website — www.im.va — and posting the Sistine Chapel Choir’s recording of the hymn in Italian on YouTube: https://youtu.be/-N0Dto5s9fg.

The text of the hymn in Latin and Italian was written by Jesuit Father Eugenio Costa and was sent to the 90 composers March 31, just over two weeks after Pope Francis announced the Year of Mercy would open Dec. 8.

The verses feature lines from Scripture punctuated by the Latin phrase “in aeternum misericordia eius,” which means “his mercy is forever.”

The interspersed Latin, Inwood wrote in a press release, makes the verses “a kind of litany.”

Like the text, he wrote, “my music is also a mixture, with elements in the style of a Taize response and a Gelineau tone,” a modern homage to chant often used today when singing the Psalms at Mass and other liturgies.

Inwood said he wrote the English and French words of the song, and the Gelineau tone, which allows for a wide variety of syllables to be sung in every bar, should make it easy to translate the song into other languages as well.

The composer said he will be present in St. Peter’s Basilica Dec. 8 for the opening of the Holy Year when the song will make a very public debut under the direction of the Sistine Chapel Choir and accompanied by professional brass players.

“Hopefully it will work in more simple settings, too,” he told CNS. “There are even guitar chords, so it should be doable even in the smallest groups.”

As someone who has written and composed liturgical music for decades, Inwood said, “You get used to hearing your music slaughtered in parishes around the world. But you realize that if it helps them pray, that is what matters.”

Father Costa, who wrote the original text, told Vatican Radio that Inwood “is very talented” and “understands what it means to compose with a precise intention — not ‘for angels and archangels,’ but for a real assembly, nonprofessionals, people who sing because they are gathered to pray and to sing.”

At a small ceremony July 28 in the Vatican Secretariat of State, Inwood said, he and Father Costa formally signed over all rights to royalties from the song to the pontifical council so that it truly can be used around the world.

PREVIOUS: Author explores how art, architecture lead us to prayer

NEXT: Ricki and the Flash: A character study that fails to set