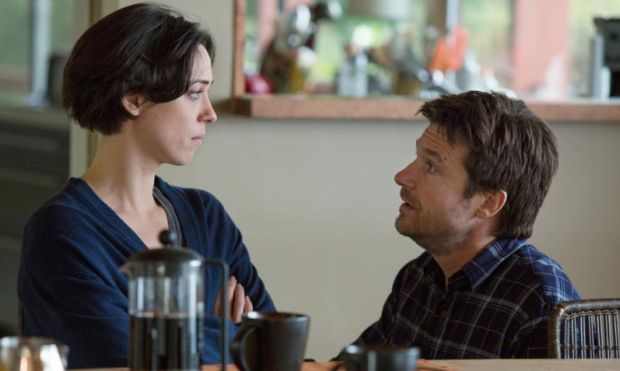 Rebecca Hall and Jason Bateman star in a scene from the movie "The Gift." (CNS photo/STX)

NEW YORK (CNS) — “The Gift” (STX) takes its time unwrapping. What begins as a psychological thriller eventually reveals itself as another entry in the revenge-fantasy genre.

Someone wronged back in high school wreaks elaborate self-styled “justice” on a smugly successful former classmate. So in place of lusty teens and a vaguely sinister summer camp, here we’re dealing with an upscale couple living the American Dream in Southern California.

When one of the victims isn’t peering down a dark hallway, we get occasional discussions about moral behavior — usually in terms of the distant past.

No one changes his or her point of view. There’s only a growing realization that none of these characters can be taken at face value.

The story includes a few competently delivered seat-jumping shocks, since writer-director Joel Edgerton — who also plays the mysterious retribution-seeker, Gordo — happily embraces some horror cliches in the midst of his understated style.

Simon (Jason Bateman) and Robyn (Rebecca Hall) have moved to the West Coast from Chicago because of Simon’s exciting new job as a corporate security expert. They’re both anxious for a new start.

In Robyn’s case, that means re-launching her freelance interior-design career while recovering from a miscarriage.

Time, Simon insists, heals everything; “It’s really important not to look back.”

Not so fast, Simon. On their first outing to a hardware store, whom should the spouses encounter but the mumbling Gordo — an acquaintance from Simon’s school days.

Socially awkward Gordo has had a rough time of it as an adult. The military didn’t work out for him, and he has a bit of a criminal record.

He’s also generous to a fault, or so it seems. He starts dropping by the couple’s expensive house with gifts, leaving presents at the front door when they’re not home.

He even — cue the spooky music — drops in on Robyn when she’s alone.

Robyn, sensitive and compassionate, doesn’t find Gordo all that annoying, and is initially suspicious of Simon’s damning descriptions of him. She’s briefly on her husband’s side, however, after Gordo invites the duo to dinner at a fancy home that turns out not to be his.

Yet, even as she learns the awful secret of Gordo’s past, Robyn also discovers that her manipulative husband has a dark side of his own.

Since all motivations in this breed of movie tend to be underlined with epigrams, Gordo, who neither forgets nor forgives, admonishes Simon, during a physical confrontation, “You’re done with the past, but the past isn’t done with you.”

The conclusion is marred by several logical flaws as well as by the misogynistic notion that Robyn can somehow be made to represent a sexual “gift” herself.

The film contains a vengeance theme, some physical violence, an implied sexual assault, adult banter, a couple of uses of profanity and frequent rough and crude language. The Catholic News Service classification is A-III — adults. The Motion Picture Association of America rating is R — restricted. Under 17 requires accompanying parent or adult guardian.

PREVIOUS: Ricki and the Flash: A character study that fails to set

NEXT: ‘Fantastic Four’: A sci-fi flick that’s as glum as it gets