Pope Francis to use Abe Lincoln’s lectern in Philadelphia 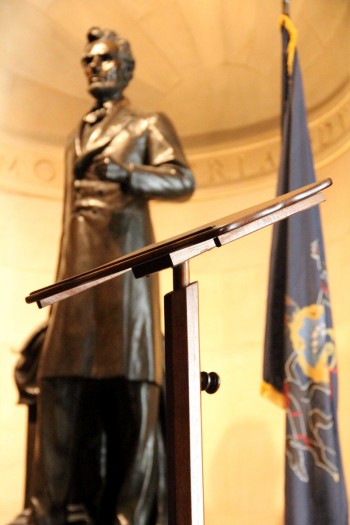 The lectern that President Abraham Lincoln used to deliver the Gettysburg Address almost 152 years ago stands at the Union League of Philadelphia before a statue of Lincoln. Pope Francis will use same lectern when he speaks at Independence Hall Sept. 26 during his two-day visit to Philadelphia this fall. (Sarah Webb)

As lecterns go, it is strictly utilitarian, a simple walnut stand with none of the ornamentation commonly found in mid-19th century furnishings. Yet it has a distinguished past and is about to have a distinguished future.

In a press conference on Aug. 7 at the Union League of Philadelphia it was announced by World Meeting of Families President Bob Ciaruffoli that Pope Francis, during his Sept. 26 speech at Independence Hall while in Philadelphia for the World Meeting of Families, will use the lectern that was most famously used by President Abraham Lincoln when he gave his Gettysburg Address.

The lectern, which is privately owned, is on long-term loan to the Union League as part of its Abraham Lincoln Foundation exhibit. The Union League, a private club, was founded in 1862 specifically to support the policies of Lincoln.

“We are both honored and grateful for the generosity of the Abraham Lincoln Foundation in offering to the Holy Father the opportunity to speak from the lectern from which Abraham Lincoln delivered probably the most important American speech,” Ciaruffoli said.

It is expected Pope Francis will address the issues of immigration and freedom of religion during his Independence Hall speech, Ciaruffoli noted, saying “Just as Lincoln addressed the most important issues of his time from this lectern, so too will Pope Francis.”

Lincoln was scheduled to speak at the dedication of the Union League but was assassinated shortly before the event. He did visit Independence Hall twice — first in 1848 when he attended the National Convention of the Whig Party, and secondly on Feb. 22, 1860, while on his way to Washington, D.C., for his inauguration, according to John Meko, executive director of foundations for the Union League.

It was hours before that event that Lincoln received news of an assassination plot against him when his train was supposed to stop in Baltimore, which was thwarted. In his remarks, according to Meko, Lincoln spoke of the founding principles of the nation proclaimed at Independence Hall, adding “I would rather be assassinated on this spot rather than give up these principles.”

Later, in 1865, Lincoln’s body lay in state at Independence Hall as one stop on the journey back to Springfield, Illinois, for burial. 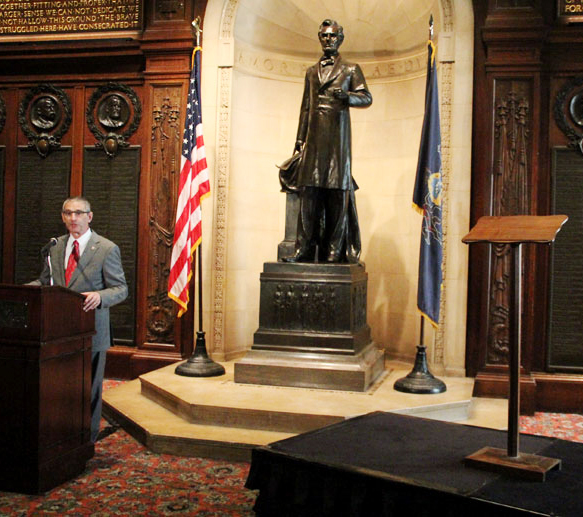 Robert Ciarufolli, president of the World meeting of Families, discusses the history of the lectern (at right) that the pope will use for his Sept. 26 address at Independence Hall in Philadelphia. (Sarah Webb)

There are no pictures of Lincoln at this particular lectern, but it is well documented. The Battle of Gettysburg took place July 1-3, 1863, and with more than 50,000 killed it became the bloodiest battle of the entire Civil War.

The Union forces won the battle and coupled with the simultaneous capture of Vicksburg, Mississippi, it was the turning point of the war, although it would not come to a close until the surrender of Lee at Appomattox, Virginia, almost two years later.

Shortly after the Gettysburg Battle the decision was made to locate a National Cemetery on this battlefield where so many men on both sides died.

As related by Jim Mundy, director of education and programming for the Union League, Edward Everett, a former U.S. Secretary of State who was considered one of the best orators in the country, was asked to give the official oration. The date was set for Nov. 19, 1863 and President Lincoln, who would also attend the ceremony, probably as a courtesy, was asked to give “a few appropriate remarks.”

The speech Everett prepared was very long, which was the custom of the time, and contemporary accounts testified that it was very good. While in Gettysburg he stayed at the house of a friend, Michael Jacobs, a professor at Pennsylvania College (now Gettysburg College). As they were leaving the house they decided to take along a lectern from the house to rest the manuscript upon.

Everett spoke for two hours, as was expected of him, then it was Lincoln’s turn, and of course he used the same lectern. Lincoln spoke for only two minutes, but with words that have resonated down through the ages.

Meanwhile another professor at Pennsylvania College, J. Howard Werz, was busy collecting artifacts and recording details of the great battle and its aftermath and Jacobs eventually gave the lectern to him. It remained relatively unused until 2013 when it was resurrected for the 150th anniversary of the Battle of Gettysburg.

Now Pope Francis will stand behind it to talk to the world about peace and freedom. His challenge will be to match the immortal words of the martyred Abraham Lincoln: “…that this nation under God shall have a new birth of freedom, and that this government of the people, by the people, for the people shall not perish from the earth.” 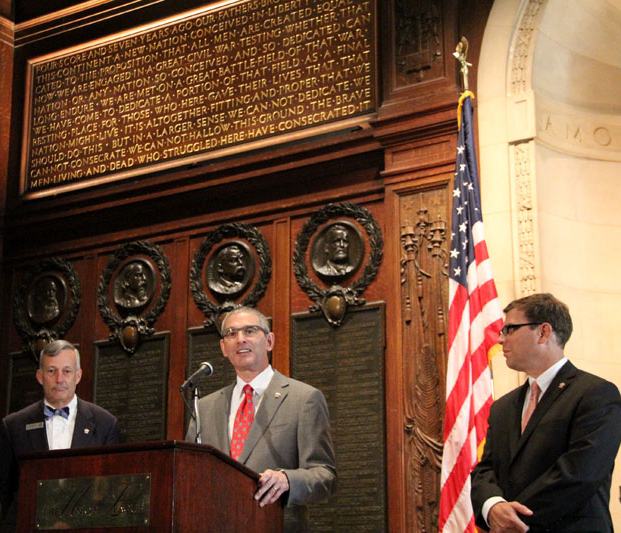 Robert J. Ciaruffoli, President of the World Meeting of Families (center) speaks about the lectern Aug. 7 with Union League of Philadelphia staff Jim Mundy (left), director of education and programs, and John Meko, executive director for foundations. The venerable Union League was founded in Philadelphia in 1862 to support President Lincoln’s policies. A portion of the Gettysburg Address is emblazoned on a plaque behind the speakers. (Sarah Webb)

NEXT: Across the Aisles: Warming up with the Papal Choir