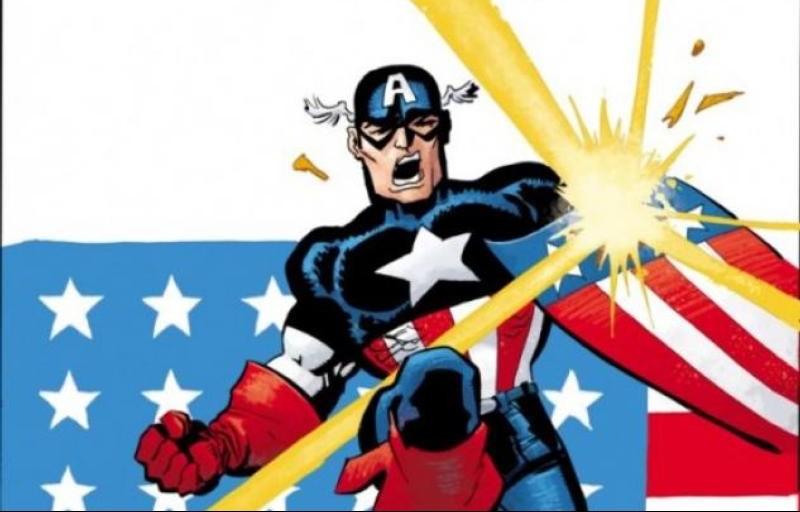 NEW YORK (CNS) — There are a couple of different ways for the uninitiated to familiarize themselves with Marvel Comics characters. Novices can see the popular movies, of course. There’s also the option of investing in expensive back issues.

But a more rewarding path into the Marvel Universe is provided by the work of Jeph Loeb and Tim Sale. Writer Loeb and artist Sale specialize in elegant limited-series retellings of the origin stories of iconic Marvel figures. Their latest effort, “Captain America: White,” follows popular books the duo have done about Spider-Man, Daredevil and the Hulk.

Loeb and Sale’s work for Marvel usually follows a standard plot line: A superhero is reflecting back on a more innocent time in Marvel history, and recounts how he got his super powers.

The colors assigned in their titles generally connote either the mood of the narrative or the hue of a costume the hero in question wore early on in his career. Thus “Spider-Man: Blue” finds Spidey meditating on the death of his old girlfriend, Gwen Stacy, while “Daredevil: Yellow” showcases the canary-colored outfit Matt Murdock’s alter ego sported in the early 1960s.

“Captain America: White,” by contrast, is named for the historical context from which its subject emerged: World War II, a time when the world could more easily be divided into pure good and total evil. Little moral shading is required as Captain America — real name Steve Rogers — and his sidekick Bucky assail malignant Nazis.

There’s no sexual content or bad language in “Captain America: White.” The battle scenes are depicted without graphic violence. Still, the integral themes of armed struggle and hateful ideology may be too intense for small children.

What makes “Captain America: White” captivating is its art. Sale is skilled at using full panels to convey majestic size. That holds true whether he’s portraying the 1960s New York of Spider-Man or the mid-century British cliffs scaled by Captain America and his group of “howling commandos” during a beach landing. Sale has been compared to comics giant Jack Kirby, who co-created Captain America with writer Joe Simon in 1940.

It would even be possible to read “Captain America: White” without any script at all — which is not to say that Loeb’s work is without merit. While past depictions of Captain America have understandably made him an exemplar of patriotism, honesty and duty, here the hero keeps circling back to a different virtue: hope. In response to rough soldiers who mock his so-called “Little Orphan Annie” attitude, Cap steadfastly repeats: “You have to have hope.”

“Captain America: White” is a five-issue miniseries, and at this point there’s no telling how its optimistic theme will be developed. Still less can we surmise whether its persevering outlook will be joined to charity and faith, the other two qualities that make up the trinity of theological virtues at the heart of the Christian moral life. Whatever the future may hold, Loeb and Sale have at least provided a beautiful environment in which to await developments.

The book contains frequent stylized combat. The Catholic News Service classification is A-II — adults and adolescents. The Marvel rating system rating is T+ — teens and up; appropriate for teens 13 and above.

NEXT: No cheers for the revolution in final ‘Hunger Games’ film