Movie review: Secret in Their Eyes 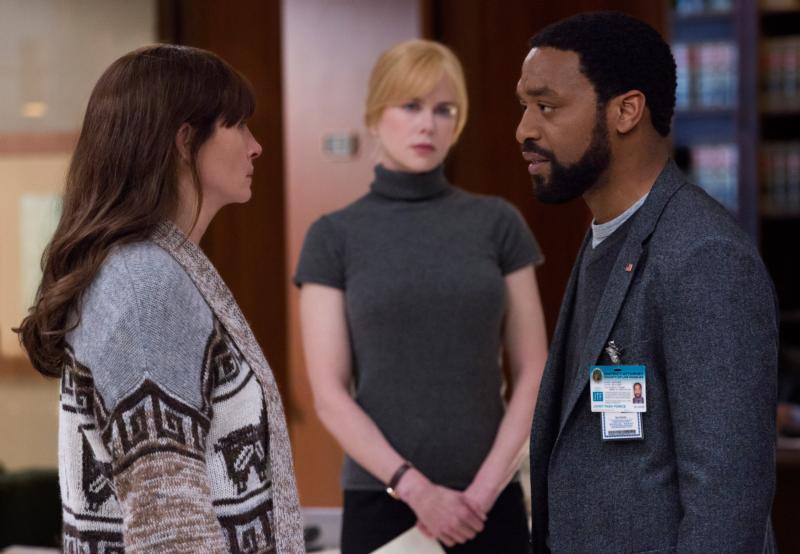 Julia Roberts, Nicole Kidman and Chiwetel Ejiofor star in a scene from the movie "Secret in Their Eyes." (CNS photo/STX)

NEW YORK (CNS) — In the long lead-up to its twist ending, only allusions to an “open” marriage would really trouble the ethical waters for mature potential viewers of the crime drama “Secret in Their Eyes” (STX).

On the far side of that surprise, however, lurks a sudden shark attack of blatant immorality: a justification of coldblooded killing that renders this film completely unacceptable for viewers of any age.

One of the casualties of this last-minute ambush is a reasonably clever premise pitting national security concerns of the highest order against the pursuit of justice in a case whose outcome, despite the heinous nature of its underlying offense, can affect only a limited circle of individuals.

In the nervous months following the 9/11 attacks, the Los Angeles office of the FBI is straining to prevent a West Coast follow-up to the tragedies that transpired in New York and Washington. One means of doing so is to monitor mosques that intel suggests may be hotbeds of radicalism.

This strategy entails hours of boring hidden-camera surveillance work for fellow agents, and close friends, Ray (Chiwetel Ejiofor) and Jess (Julia Roberts). The arrival of a new colleague, bigwig prosecutor Claire (Nicole Kidman), provides a pleasant distraction from their drudgery, however: Much to Jess’ amusement, Ray falls instantly for the comely but engaged gal, and does a very poor job of disguising his emotions.

But far darker developments are soon in the offing. A body is discovered in a dumpster next door to the sanctuary Ray and Jess are tracking, and when the duo arrives on the crime scene, Ray is thunderstruck to discover that the raped and murdered victim is none other than Jess’ teen daughter, Carolyn (Zoe Graham).

Ray plunges into a vigorous investigation on behalf of his devastated pal, but soon finds himself stymied. The prime suspect in the case, a regular at the mosque named Marzin (Joe Cole), turns out to be a bureau mole whose identity must be protected at all costs.

The corrupt upshot of this complication proves emotionally wearing for Claire, but takes a far graver toll on Ray. Quitting the FBI, he moves east, but remains obsessed with nailing the untouchable Marzin.

More than a decade after Carolyn’s death, Ray’s relentless pursuit of her killer leads to an apparent breakthrough and to a reunion with his former co-workers. Yet resolution of the wrongdoing — and of his missed romantic opportunities with Claire — remains elusive.

Roberts’ turn might be credited for raising the movie as a whole out of the realm of the routine. But the revelation of what eventually befalls her is framed in a way that unmistakably invites viewers to approve of actions wholly contrary to scriptural norms.

The film contains warped values concerning justice, the sanctity of human life and marital fidelity, unsettling images of violence with brief gore, a discreetly portrayed act of indecent exposure, several uses of profanity, at least one instance of rough language and occasional crude and crass terms. The Catholic News Service classification is O — morally offensive. The Motion Picture Association of America rating is PG-13 — parents strongly cautioned. Some material may be inappropriate for children under 13.

PREVIOUS: No cheers for the revolution in final ‘Hunger Games’ film

NEXT: ‘Creed’ punches above its class, lands a knockout